Provodnikov: No Matter How Hard it is, I'll Keep Going Until Death

Where one door closes, another seems to open. That would be the case for hard-hitting Ruslan Provodnikov.

After a thrilling and entertaining loss to Lucas Matthysse the previous April, the likelihood of watching Provodnikov on HBO diminished.

Provodnikov is a good example of won-loss records defining a fighter. Case in point is the number of fight fans that tune in to his fights or rush to him for a photo at a fight card he attends. 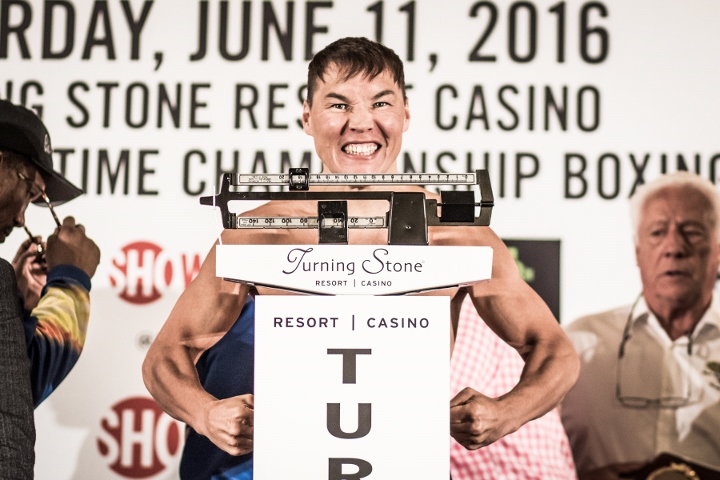 But with HBO deciding not to approve any fights of his for the time being, Provodnikov and his team decided to cross the street to the ‘other’ network.

Provodnikov will make his Showtime debut tonight, when he faces John Molina at the Turning Stone Resort and Casino in Verona, N.Y. The 12 round bout will air live on Showtime, beginning at 9 p.m. ET/ 6 p.m. PT.

In the wake of the compelling and heart-stopping back and forth affair between Francisco Vargas and Orlando Salido last Saturday, boxing fans are licking their chops at what Provodnikov and John Molina could bring to the table Saturday night.

Both Provodnikov and Molina have gained a reputation over the years of being hard-hitting punchers who come forward. Both fighters fought on a number of 'Friday Night Fights' telecasts over the years before Provodnikov became a staple on HBO.

Over the last couple of years, Provodnikov has faced Mauricio Herrera, Lucas Matthysse, Mike Alvarado, and Timothy Bradley. You name the opponent and Provodnikov has been in a compelling fight in each of those fights.

After each fight, a little piece of him is left in the ring, due to the brutal exchanges he had with his opponents, especially as of late.

Provodnikov has not fought since Nov. 7, when he stopped unbeaten, but overmatched Jesus Rodriguez in the fourth round. Despite the height and reach advantage, odds makers favor Provodnikov to defeat Molina (28-6, 23 KOs), who snapped a three-bout winning streak with a third round stoppage win over Jorge Romero on Nov. 28.

"He's a tough guy," Provodnikov told BoxingScene.com in a recent sit-down interview. "It's difficult to prepare for him because he has a different, weird style. The punches come from different angles. It's going to be a tough fight, but I will be ready."

Molina may be a step or two past his better fighting days, but that is not going to stop Provodnikov from putting out his best on Saturday.

Provodnikov may be 3-3 in his last six fights, but he is a solid example of how won-loss records do not reflect his appeal to amongst boxing fans. It is those fans that continue to follow Provodnikov's every move, in and out of the ring.

Instead, Provodnikov is all about putting out his best in every fight and giving fight fans a good show.

"That's just my soul," said Provodnikov, who is now trained by Joel Diaz in Indio, Calif. "That's how I'm fighting and what I bring inside the ring. I know what people love about me. That's how I feed my family. It's my job."

Despite the wars he has been in, along with bruises and injuries to show for it, Provodnikov is in a much better place than where he was when he was growing up.

Provodnikov’s youth was putting up with the long and frigid winters in his hometown of Beryozovo, Russia. Temperatures in that region drop way below zero, colder than what most people think is cold.

The 32-year-old Provodnikov grew up in poverty in his hometown. It was not uncommon for him to get into street fights, sometimes winning money when bets were placed on him.

The amateur program in Russia saved him, but it was later in his pro career where he has begun to earn solid six-figure purses.

"I don't even words to describe it. I had a very, very tough childhood. There were times when I was eating food from dog bowls. Right now, for me, it sounds like a miracle. I'm in a foreign country (United States) and people want to see me, people want to say hi to me, hug me, so it's exciting. It's what I live for."

Provodnikov is eyeing a fall return against Adrien Broner, something Showtime has expressed interest in. But Provodnikov has to get by Molina, which is no easy task.

A Fight-of-the-Year candidate against Molina awaits Provodnikov and that suits him just fine.

For Provodnikov, it continues to be what he gives more than what he gets out of the sport.

Francisco A. Salazar covers boxing for the Ventura County (CA) Star newspaper, RingTV, and Knockout Nation. He can be reached by email at [email protected] or on Twitter at FSalazarBoxing

[QUOTE=Squ□redCircle34;16779619]Floyd has a great chin and I don't even like the mother****er but he showed he can take it when he fought Mosley and Maidana.[/QUOTE] Comparing Molina to Floyd, Pac, Cotto? It was impossible to hit Floyd twice in an…

That's the spirit Ruslan, fight till death! Hopefully he's tighten up the defense.

[QUOTE=bambam182;16779402]the fight with demarco was a short stupid stoppage. pac has been wobbled and knocked down out a couple times. is he suspect? mayweather has been rocked a few times, is he suspect? cotto has been knocked out and hurt,…

[QUOTE=OctoberRed;16779310]Molina's chin is suspect, which could make the fight end earlier than expected[/QUOTE] Molina's problem is his body has been worn down the past,2/3 years from the wars & beatings he's taken...His chin is durable...