NEW YORK – It wasn’t just that they were presented with another world title fight.

Dennis Hogan had to move up from 154 pounds to 160, according to his promoter, because junior middleweights weren’t exactly eager to box him once they saw how much trouble Hogan gave Jaime Munguia. Hogan lost a majority decision to Tijuana’s Munguia on April 13 in Monterrey, Mexico, but plenty of observers believe Hogan did enough to win their 12-round fight for Munguia’s WBO junior middleweight title.

Hogan had hoped to get another shot at a 154-pound championship following that debatable defeat. That scenario seemed unlikely, therefore the Irish-born, Australian-based contender jumped at the opportunity to challenge Jermall Charlo for the WBC middleweight title. 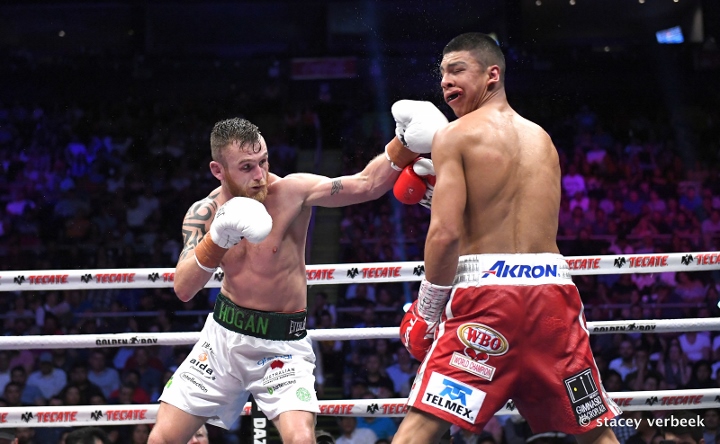 Houston’s Charlo (29-0, 21 KOs) will defend his championship against Hogan (28-2-1, 7 KOs) in a main event Showtime will broadcast December 7 from Barclays Center in Brooklyn.

“We’re coming here extremely confident,” Paul Keegan, Hogan’s promoter, said during a press conference Thursday in Manhattan. “The reason why Dennis took this opportunity is really simple – not one junior middleweight would fight Dennis Hogan after Mexico. Not one. So, our options were very limited. So, when this opportunity came to us, [manager] Peter [Kahn] rang me and I rang Dennis, and he said yes. No, ‘How much? What are we doing? Where’s the fight? Yes.’ So, we believe we’ve got the uncrowned world champion in our camp. You know, he’s stronger now, moving up to middleweight.”

Hogan and Keegan realize the challenger is a sizeable underdog against Charlo. They also know Hogan will benefit from what they expect will be a large, loud, proud group of Irish fight fans at Barclays Center.

“We’re excited about being here,” Keegan said. “We’re excited about the Irish contingent who are gonna hit Brooklyn that night. You know, there’s an amazing history between, you know, Irish people and American people, especially in New York. And already, we know that there’s people coming over from Ireland for this fight, there’s people coming from Australia, plus, you know, the thousands of Irish Americans, we were meeting people today whose great-, great-, great-, great-, great-grandfather moved over here who want Dennis Hogan to win this fight. So, we’re not coming over here for a holiday. We’re not coming here for a camp. This is destiny. An Irishman is gonna become the middleweight champion of the world in New York City, and that’s our goal.”

[QUOTE=maguirre;20194255]Nobody would fight him? Who is he, Golovkin? There's J-Rock, Hurd, Lara, Castano, Trout would accept any offer that comes his way. He's broke. There's also Lubin who is hungry for KO wins. Delusional promoter. Probably getting his script from…

Good luck to Hogan but my money would be on Charlo, Hogan is just not a hard puncher as his record shows. Hogan is looking for a pay day and given how these things work it was not that other…

Thats because he wasn't worth their time. Munguia is the weak belt holder pretender of the division that would lose his belt to all other title holders. He is a hype job that is unskilled and relies on his size…

wonder who they asked.

Nobody would fight him? Who is he, Golovkin? There's J-Rock, Hurd, Lara, Castano, Trout would accept any offer that comes his way. He's broke. There's also Lubin who is hungry for KO wins. Delusional promoter. Probably getting his script from…