The fall season finale of Boxeo Telemundo will proceed without a hitch.

All participants made weight for the final Telemundo telecast of 2020, which airs live Friday evening from a crowdless Osceola Heritage Park in Kissimmee, Florida. Headlining the show, Colombia’s Belmar Preciado and Mexico City’s Rodolfo ‘Fofo’ Hernandez collide in a 10-round junior featherweight contest.

Both boxers weighed in right at the 122-pound divisional limit.

Preciado (20-3-1, 13KOs) drops back to his best suited weight division, just six weeks after suffering a shocking 5th round knockout loss to Dennis Contreras in this very venue. The fight marked Preciado’s lone piece of ring action in 2020, as his planned St. Patrick’s Day showdown with Belfast’s Michael Conlan was shut down due to the ongoing coronavirus pandemic. 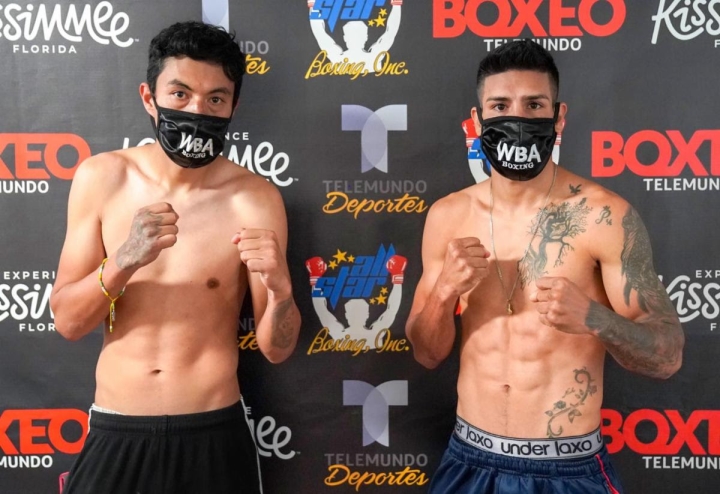 Hernandez (30-9-1, 28KOs) fights both on Telemundo and in the United States for the first time in his career.

Polaco (3-0, 2KOs) weighed 154 pounds for his scheduled four-round junior middleweight clash with Ryan Favela, who also weighed 154 pounds. Polaco will fight for the fourth time in as many pro fights on Telemundo and in this venue, turning pro this past August. The 6’2” southpaw from Fajardo, Puerto Rico will represent his beloved island next summer in the rescheduled Tokyo Olympics.

Eranosyan (2-0, 1KO) tipped the scale at 134 pounds for his scheduled eight-round clash with Argentina’s Emiliano Garcia (16-5-1, 13KOs), who came in at 134 pounds. Eranosyan—a 27-year old Georgian lightweight now based in Miami—is coming off of a six-round decision win over unbeaten Luis Valentin earlier this month as part of. the fall season premiere.