Povetkin vs. Whyte: What About The Winner?

There’s been debate over whether Dillian Whyte will be fit to face Alexander Povetkin on the scheduled rematch date of November 21.

Whyte was dramatically knocked out by the Russian in round five in a fight he was winning, having floored the visitor to Matchroom’s Fight Camp twice in round four.

But the 40-year-old veteran turned things around with a crunching left hand that had Whyte down and out, costing him his long-held spot atop of the WBC’s ratings.

The knockout was savage, no question, but Whyte was calling for a rematch before the dust had even settled that night.

He felt he had Povetkin’s number. We might find out on November 21 if he does. That’s the Sky Sports Box Office date but, of course, Whyte must serve a 45-day suspension and then undergo a battery of medical tests from the British Boxing Board of Control before they reinstate his license to face Povetkin again.

That means no sparring but these things are entirely unenforceable. Whyte retreated back to camp in Portugal.

Cynics will say medical approval is a formality and that the Board wouldn’t step in the way of the money-spinner. They would. They don’t want blood on their hands, and neither should anyone else.

But the lost man in this is Povetkin.

For many, he took more cumulative punishment in the fight than Whyte. So what about his suspension? What about his tests? What’s to say he’s okay after his two knockdowns and the shots that he, at 40, sustained that night?

When the excellent Filipino Z Gorres defeated Luis Melendez in the final fight of his career at the end of 2009, the Filipino was well ahead but clipped and badly hurt in the 10th and last round. He managed to stay in the remainder of the fight, just, and heard the final bell. In an exaggerated case of the point I’m trying to make, his team celebrated and the officials went about announcing him as the winner but he was in deep trouble. Moments later, he collapsed as he tried to leave the ring under his own steam and was left fighting for his future in a medically-induced coma. 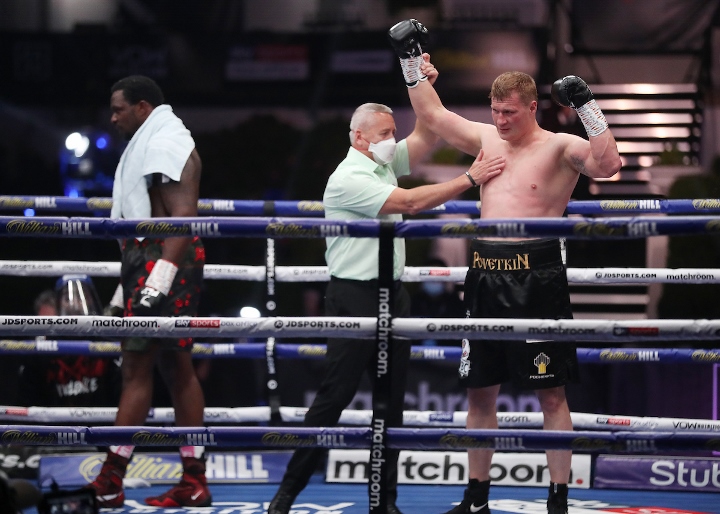 Just because someone wins a fight, it doesn’t mean they’re in the clear.

On the Boxing Life Stories podcast, Carl Thompson, former WBO cruiserweight champion, recollected his thrilling career and reminisced how he would have two to three months between wars of attrition, so a brief time to recover before starting to train and spar again almost immediately.

The understandings of complex head injuries have changed since and now there appears to be more concern for the victors than previously. Head trauma is head trauma regardless of the outcome of a fight.

Going back far further, former Ring editor Nigel Collins once said he worried that both Marvin Johnson and Matthew Saad Muhammad (then Matt Franklin) “might die” from the brutality of their first fight in 1977. Less than two months on, Matthew went back in and stopped Billy Douglas in another wild thriller.

That said, Matthew paid for his damage later in life and died of ALS, a neurological illness. He’d made his name winning violent wars.

Back then, the victor would just roll on. That said, so would the loser, because Johnson boxed a couple of months later, too.

Robert Smith, general secretary of the British Boxing Board of Control, said Povetkin will also have to go through medicals, too, for the rematch to happen.
“Whyte’s medical examinations are imminent and the Board’s doctors will then consider whether the suspension is lifted, enforced or extended depending on the documentation and the doctor’s findings,” he said. “We will get medicals from him [Povetkin] before we give him permission to box, so in a way it’s the same. Povetkin is licensed by the Russian federation but the Board issues a permit to visiting fighters allowing them to box. We will receive new medicals sent over to us and if we need anything else we will request it. As a winning boxer, it’s up to the medical officer to suspend him but we didn’t suspend him. If he was going to box in that time we would have notified the Russian Federation of anything we require, including if he was to box in Russia we would have been in touch with the federation.”

“You raise a good question,” considered renowned fight neurologist Dr Nitin Sethi of whether winners were afforded the same medical supervision as losers. “This is the way I feel. If it has been a tough fight and the fighter was knocked down a couple of times, able to get up and beat the count and win, he warrants close medical supervision during the rest of the fight and post fight. He likely was concussed during the fight even though he won. Such a fighter in my opinion deserves a period of cognitive and physical rest for the brain to recover before he is allowed to enter the ring to spar or fight. Whether you label it medical suspension or compulsory medical rest is a matter of words. The period of medical rest/suspension has been debated and there is currently no consensus on it. I would recommend he/she not fight till they are asymptomatic and a neurology clearance should be requested before the fighter returns to the ring.”

It’s all too easy for a highlight reel finish to garner the headlines but it’s also important to remember that winners are equally vulnerable and need to be looked after, too, particularly as scientists learn more about second impact syndrome (SIS) and the risks of someone with an underlying head injury being hit, hurt and injured again.

The Board will suspend winning boxers in a rough contest, if they’ve been cut or damaged they can spend several weeks on the suspended list. Anthony Joshua might only box once or twice a year but he was suspended after his wickedly entertaining war with Wladimir Klitschko in line with the Board’s policies. Klitschko was suspended, too, but never fought again.

It’s all too easy for a highlight reel finish to garner the headlines but it’s also important to remember that winners are equally vulnerable and need to be looked after, too, particularly as scientists learn more about second impact syndrome (SIS) and the risks of someone with an underlying head injury being hit, hurt and injured again.

Povetkin to do the job again in my opinion.

It’s funny how no one was concerned about fighting a 40 year old fighter before Whyte got knocked out....if he fights Povetkin again he’s going to get knocked out again he’s a bum

[QUOTE=Jkp;20793426]Catching PEDs cheats is not a priority for UKAD. Even when they do catch them, they let them off without penalty. (e.g . Dillian Whyte, Tyson Fury, Hughie Fury). I doubt they have the resources to fly someone to portugal…

[QUOTE=tokon;20792803]Yes, you'd think they'd be wise to that old trick by now, wouldn't you![/QUOTE] Catching PEDs cheats is not a priority for UKAD. Even when they do catch them, they let them off without penalty. (e.g . Dillian Whyte, Tyson…

[QUOTE=Jkp;20792343]Whyte has retreated back to his drug den in Portugal to top up on peds, where ukad won't be able to find him.[/QUOTE] Yes, you'd think they'd be wise to that old trick by now, wouldn't you!