Shawn Porter’s perception of his fight Saturday night versus Yordenis Ugas is different from how some people perceive it.

Porter is consistently listed as a 4-1 favorite against Ugas, even though the Cuban contender has won eight straight fights since dropping back-to-back decisions to Emanuel Robles and Amir Imam in 2014. The WBC welterweight champion understands, though, that underestimating Ugas could lead to a subpar performance or worse.

With so much money at stake for potential title unification fights against Keith Thurman, the winner of the Errol Spence Jr.-Mikey Garcia match March 16 or Manny Pacquiao, Porter isn’t about to make that mistake. That’s what led the Las Vegas resident to take the demanding middle portion of his recently completed training camp to Washington, D.C., where respected trainer Barry Hunter helped Porter and his father/trainer Ken Porter prepare of his 12-round bout with Ugas. 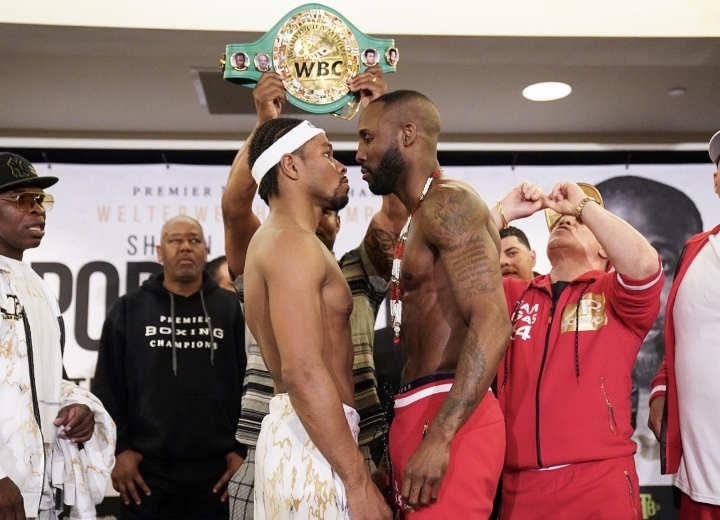 “You do the best you can to put yourself in line to win every fight, to climb the ladder and get to the point where I’m at right now. I didn’t do all that and look at all those fights like they were must-win fights, and then get here now and look at this fight like it’s any different.”

Miami’s Ugas (23-3, 11 KOs) isn’t as good or strong as Thurman, Danny Garcia and Andre Berto – the three full-fledged, top-level welterweights Porter has fought since he lost a split decision and the IBF 147-pound championship to England’s Kell Brook in August 2014. The Cuban-schools Ugas does have boxing ability and, at 32, likely realizes this could be his last title fight if he doesn’t upset Porter (29-2-1, 17 KOs).

“This fight is just like my very first fight,” Porter said. “It’s just like my second, my third and my last fight. This is a must-win fight and it’s definitely a dangerous fight. But they are always going to be dangerous when you get in the ring with the high-level caliber fighters that I fight.

“I’m simply saying then that every fight is a dangerous fight. Every fight is a must-win fight. As far as this being low-risk, high-reward, I’m gonna get paid what I deserve to get paid. Outside of that, this is another fight that I have to win and do what I have to do. So, after the fight I expect my hand to be raised and move on from there.”

FOX will televise Porter-Ugas as the main event of a tripleheader from Dignity Health Sports Park in Carson, California. That’s the same venue, then known as StubHub Center, where Brook beat Porter by majority decision 4½ years ago.

Now that he’s a two-time champion, Porter, 31, isn’t the least bit concerned with how fans and media might view his first defense of the WBC welterweight title.

“We put ourselves and our lives on the line,” Porter said, “and anyone that’s not willing to respect that just based on who we’re in the ring with, then they don’t have a good understanding of boxing. So that’s not my job. My job isn’t to convince people that I’m getting in the ring with a tough fighter. My job is not to convince people that this guy can take everything I have. It’s my job to get in there and make sure that he doesn’t do that and hopefully dazzle the crowd along the way. All the rest of it, this is just something I don’t focus on and don’t care about.”

Ugas skills should give Porter a little trouble early . But the physical strength of Porter should be the difference .

I just like Porter. He is real warrior and he fights guys from his own division.

Porters looking at this fight the way TRUE champions do. You can't underestimate anyone!