Plant Has 'Everything To Lose' To Lee; No College Degree For Me

The IBF super middleweight champion emphasized that point following a press conference Tuesday at Gotham Hall in Manhattan. Plant just doesn’t think their 12-round, 168-pound title fight July 20 in Las Vegas is as important for Lee as it for him.

Lee has a finance degree from Notre Dame and comes from a wealthy family. Plant stressed that if boxing doesn’t pan out for him, he has no backup plan to make the type of money that can change his life. 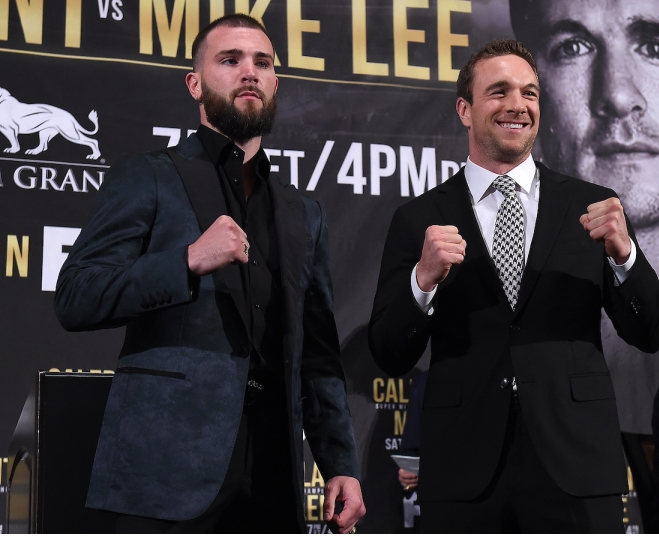 Plant spoke about the differences in their upbringings while promoting a fight FOX will televise live as part of the Manny Pacquiao-Keith Thurman undercard from MGM Grand Garden Arena. Pacquiao-Thurman will headline a FOX Sports Pay-Per-View show later that night.

“Coming from no man’s land, where nobody makes it out. That’s something you don’t know anything about. So, if this guy ever thought for one second that I would let him mess this up for me and send me back there – because unlike him, I have everything to lose. This is how I keep a roof over my head and food in my belly. That’s something he don’t know anything about. So, if he thinks he’s going to mess this up for me, he’s not half as educated as I thought he was. So, every night from now until July 20th, I hope him and his team, before they go to bed at night, can envision the words, ‘And still.’ Because that’s all that him and his team and any of you who are tuned in is gonna hear July 20th.”

The 26-year-old Plant (18-0, 10 KOs), of Ashland City, Tennessee, will make the first defense against Lee of a title he won from Jose Uzcategui on January 13. Plant out-pointed Venezuela’s Uzcategui (28-3, 20 KOs) in their 12-rounder January 13 at Microsoft Theater in Los Angeles.

The 31-year-old Lee (21-0, 11 KOs), a native of Wheaton, Illinois, will move down from light heavyweight to super middleweight for his first world title shot.

“One last thing, I won this world title back in January for my daughter, Alia,” Plant said, referring to his daughter, who was 20 months old when she died in January 2015. “July 20th, I will be defending it successfully and in fashion. I’ll also be defending it successfully and in fashion for not just her, but for my mother [Beth], whose life was recently taken. But most importantly, I’ll be defending that world title for myself because my future and everything I have and everything I want depends on it. Because unlike him, he has nothing to lose. But for myself, I have everything to lose.”

[QUOTE=budfr;19767700]Hey Plant, fight Benavidez. Stop hiding !!!!!!!!!!!!!!!![/QUOTE] When did Benavidez make an offer? Anyhow, hasn't he got a third fight with that bum he rematched due to having a close fight and getting knocked down? That seems to be the…

[QUOTE=MEXfistology;19767229]Caleb plant is a straight pusszy , defending his belt against random mandatories to avoid fighting David Benavidez, and keeps talking about how he lost his daughter and mother just so people will feel pitty for him[/QUOTE] Don't be a…

I like a desperate fighter. I didn't think much of Plant early, maybe because of that goofy nick name, sweet hands, but he earned his spot no doubt.

[QUOTE=MEXfistology;19767229]Caleb plant is a straight pusszy , defending his belt against random mandatories to avoid fighting David Benavidez, and keeps talking about how he lost his daughter and mother just so people will feel pitty for him[/QUOTE] Yes you are…