LAS VEGAS, NV -- Boxing's only eight-division world champion and the reigning Fighter of the Decade, Congressman MANNY “Pacman” PACQUIAO, and five-time world champion TIMOTHY “Desert Storm” BRADLEY, will collide in a 12-round World Welterweight Championship battle of pound for pound titans, Saturday, April 9, at the MGM Grand Garden Arena in Las Vegas, Nev.  This will also mark the first time former Trainers of the Year Freddie Roach and Teddy Atlas have faced each other from opposite corners.  Promoted by Top Rank®, in association with MP Promotions, the Pacquiao vs. Bradley world championship event will be produced and distributed live by HBO Pay-Per-View beginning at 9:00 p.m. ET / 6:00 p.m. PT. Photos by Mikey Williams/Top Rank. 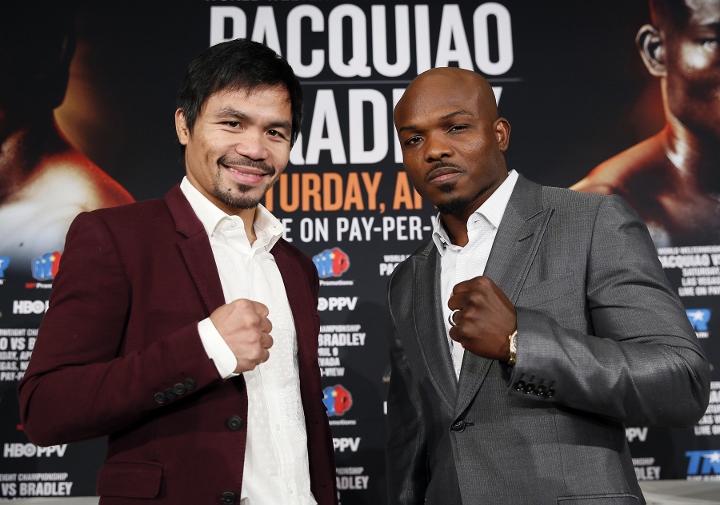 "I look forward to my battle with Timothy Bradley on April 9 and giving boxing fans a fight they will always remember," said Pacquiao.  "This fight has a very special meaning to me and I will pour every ounce of my being -- physically, emotionally and spiritually -- into preparing for Bradley.  He has my full attention.  I dedicate this fight to my fans and to my countrymen throughout the world who have kept me in their prayers. And as always, I fight to bring glory to the Philippines." 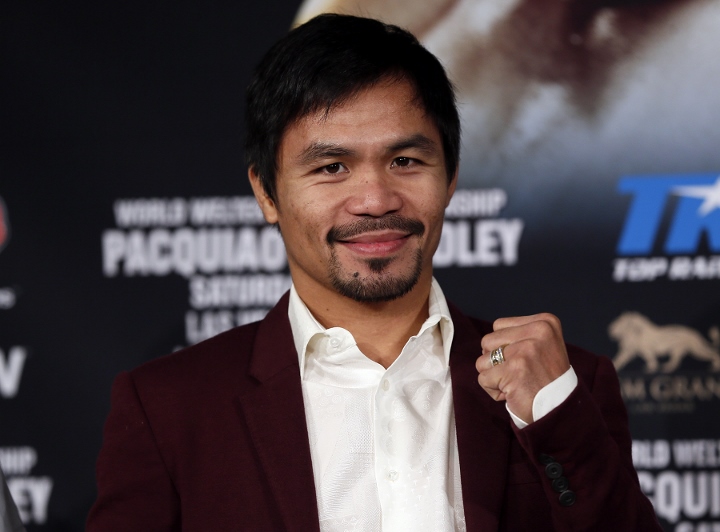 "I've never needed to light a fire under Manny to get him ready for a fight.  He's a professional," said Roach.  "April 9 will be Manny's finest hour." 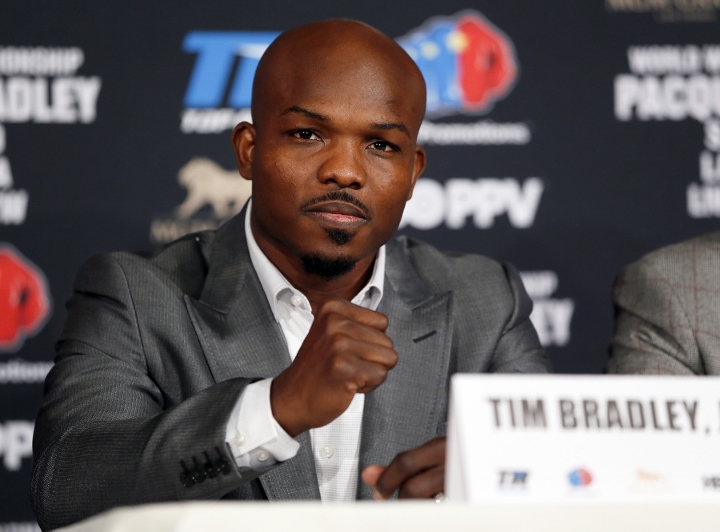 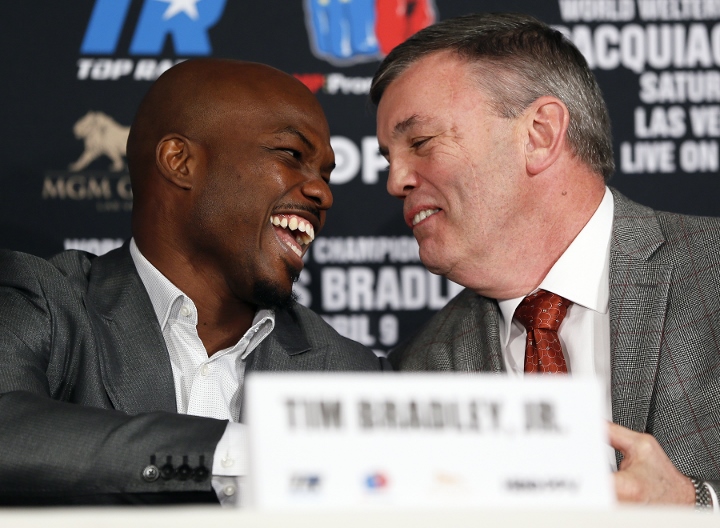 "The greatest responsibility we have is to care for our families.  But our greatest privilege is to be given a challenge to achieve something special that our families can share and always remember.  Fighting Pacquiao is exactly that challenge," said Atlas. 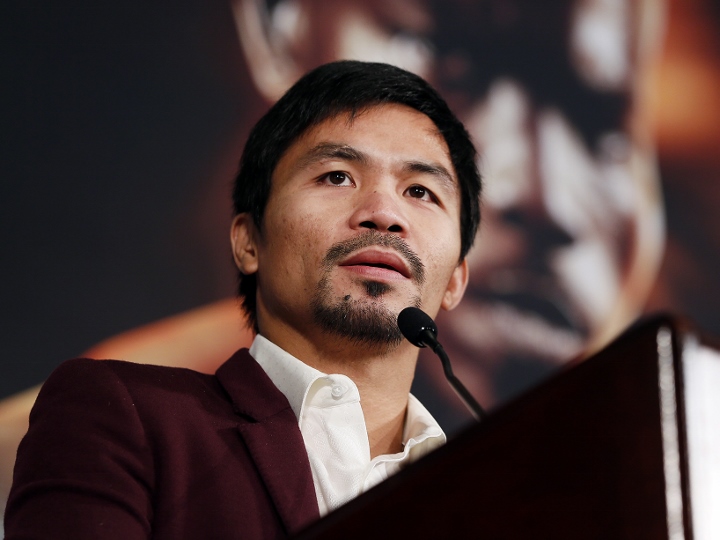 "I am looking forward to this fight between Manny Pacquiao and Tim Bradley.  We will see how much Manny has recovered from shoulder surgery and whether he has been able to retain all of his power.  We saw in Tim's last fight a new, improved Tim Bradley thanks and largely due to his astute trainer Teddy Atlas. One thing is for sure, this fight will be vastly different from the first two these two warriors have had," said Hall of Fame promoter Bob Arum of Top Rank. 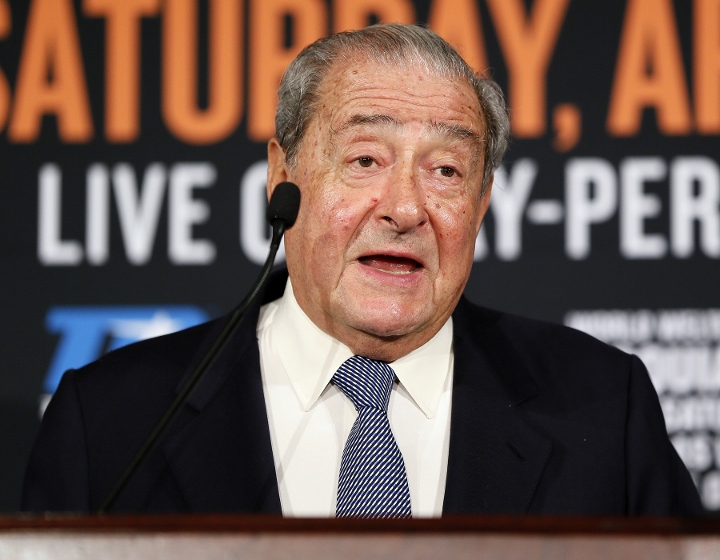 "Manny Pacquiao has had an electrifying career and is destined to be enshrined in the Boxing Hall of Fame.  Fight fans worldwide are attracted to his spirited fighting style and the grace and humility he displays outside the ring.  He is one of the sport's giants," said Peter Nelson, Executive Vice President, HBO Sports. "Timothy Bradley Jr. has consistently beaten the odds and produced a brilliant career that has but a single blemish on it. Now on April 9, at the MGM Grand in Las Vegas, Bradley gets to try and avenge the one loss on his record."

Richard Sturm, president of Sports and Entertainment for MGM Resorts International, said, “We are thrilled to host the third fight in what has become a fantastic rivalry between two extremely talented fighters at the MGM Grand Garden Arena in April.  There is no doubt both Pacquiao and Bradley will arrive to Las Vegas ready to face-off in an incredible showdown, providing boxing fans worldwide a conclusion to this storied trilogy.” 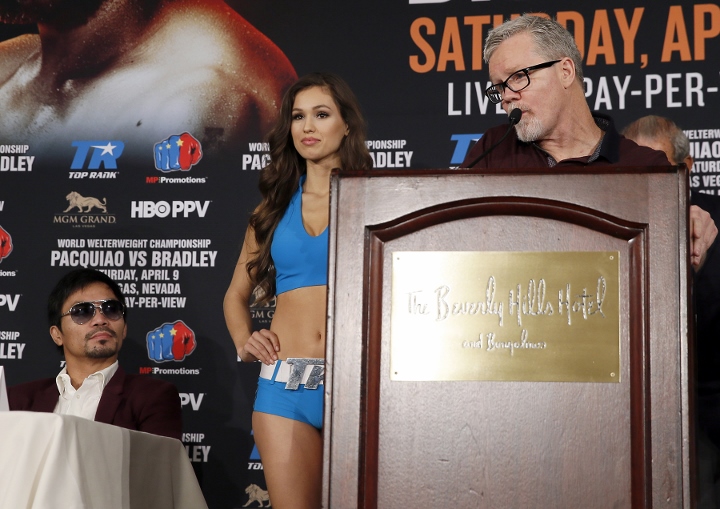 Pacquiao (57-6-2, 38 KOs), the lone congressional representative from the Sarangani province in the Philippines and an international icon, is the only fighter to win eight world titles in as many different weight divisions.  A three-time Fighter of the Year and the Boxing Writers Association of America's "Fighter of the Decade," Pacquiao's resumé features victories over present and future Hall of Famers, including Oscar De La Hoya, Ricky Hatton, Marco Antonio Barrera, Erik Morales, Miguel Cotto, Shane Mosley, Juan Manuel Márquez and Bradley.  From 2008 to 2010, five of his seven victories were world title victories in five different weight classes, from 130 to 154 pounds.  No active boxer has sold more live tickets in the U.S. than Pacquiao, who is also credited with over 18 million domestic pay-per-view buys.  He returns to the ring after a disappointing unanimous decision loss to Floyd Mayweather Jr.  The May 2 world championship fight generated a record 4.5 million pay-per-view buys and over $400 million in television revenue alone. 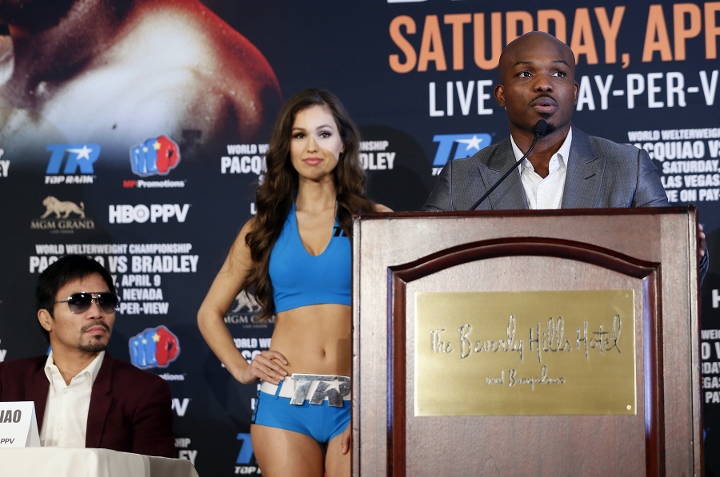 Bradley (33-1-1, 13 KOs), from Palm Springs, Calif., a two-division world champion who has held a world title every year since 2008, completed his comeback from his sole professional loss, to Pacquiao in their world title rematch, and a controversial draw against former interim world champion Diego Chaves -- both in 2014 -- when he beat undefeated world champion Jessie Vargas on June 27, to reclaim the WBO welterweight world title.  Bradley put an exclamation point on his banner 2015 year in his title defense, under the guidance of new trainer Teddy Atlas, by knocking out former world champion Brandon Rios on November 7.  It was the first time Rios had ever been stopped in his 11-year, 36-bout professional career, sending him into a temporary self-imposed retirement.  A consensus Top-10 pound for pound fighter, Bradley returns to the ring a new fighter thanks to Atlas' tutelage.  A former junior welterweight world champion who unified the junior welterweight titles twice during his previous four-year world championship reign, Bradley moved up to the 147 pound division and beat Pacquiao on June 9, 2012 to capture the WBO welterweight crown for the first of three consecutive career-best victories.  Bradley followed that by co-starring in the Fight of the Year on March 16, 2013, at StubHub Center, winning a brutal 12-round decision over future world champion Ruslan Provodnikov though Bradley was suffering from a concussion throughout most of the fight.  Seven months later Bradley encored with another virtuoso performance in defeating three-division world champion and Mexican icon Juan Manuel Márquez on October 12, 2013, at The Forum, proving that Bradley is indeed one of boxing's elite pound for pound fighters.