Also in attendance at the Highline Ballroom in Manhattan were cruiserweight champion Krzysztof Glowacki and former champion Steven "U.S.S" Cunningham plus undefeated 2012 U.S. Olympian "Sir" Marcus Browne and unbeaten light heavyweight Radivoje "Hot Rod" Kalajdzic who round out a stacked tripleheader on Saturday night.  In addition, popular Brooklyn undefeated fighter Heather "The Heat" Hardy was in attendance as she nears her undercard bout against Sweden's Anna Hultin. 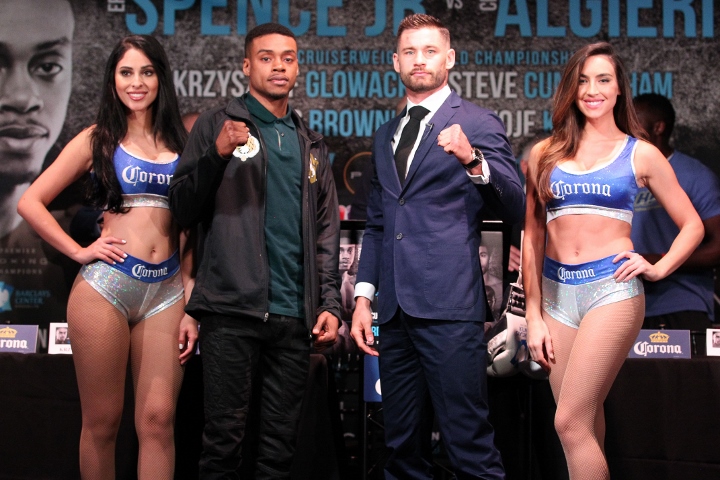 Tickets for the live event, which is promoted by DiBella Entertainment in association with Star Boxing, start at $25, not including applicable fees, and are on sale now. Tickets can be purchased online by visiting www.ticketmaster.com, www.barclayscenter.com or by calling 1-800-745-3000. Tickets are also available at the American Express Box Office at Barclays Center. Group discounts are available by calling 844-BKLYN-GP. 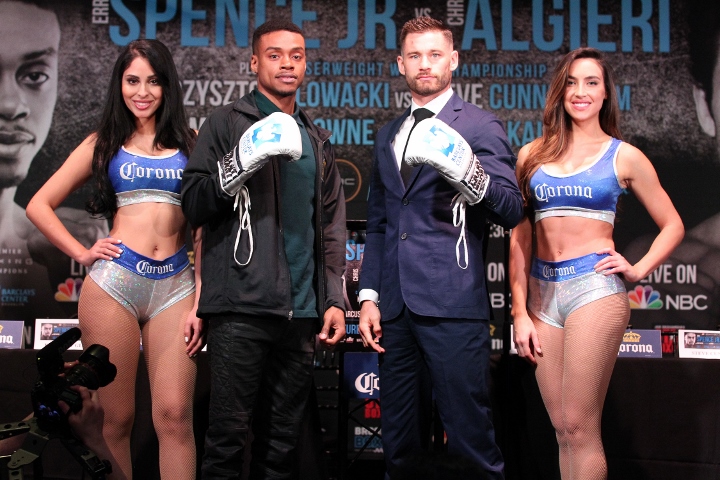 Here is what the press conference participants had to say Wednesday:

"This is a great card with great fighters and its a fantastic opportunity. A lot of people think I'm a prospect on the verge of being a contender. Saturday night is going to be a great performance.

"I never thought fight week would come. I'm just so excited to put on a show. It's going to be the best Errol Spence you've ever seen. 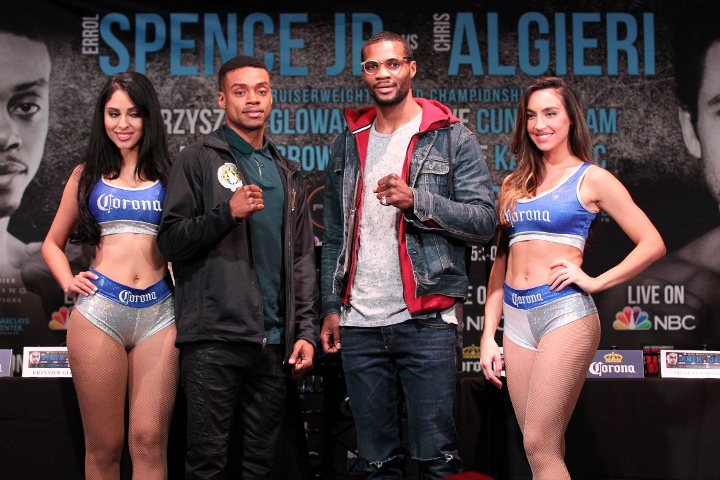 "I just need to stick with my game plan. The game plan that my coach laid out for me and do what I do and get the win.

"Whatever happens, happens. I'm going to have to feel it out in the first round.  I just need to fight smart.

"I've always felt like I was ready for this level. Saturday night, I'm looking for a coming out party. My focus is 100 percent on this fight.

"I was ready two fights ago to fight for a title. After this fight we can talk about what's next, but right now, Chris Algieri is in front of me. 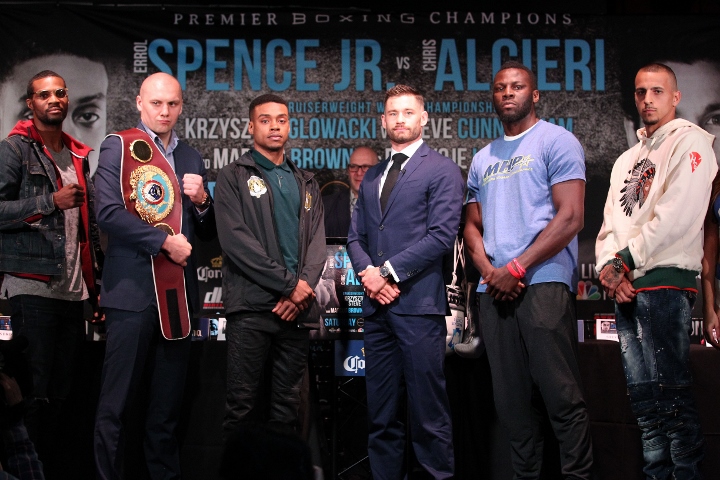 "Brooklyn has treated me very well. I've had some of my best performances here at Barclays Center and I look forward to another.

"It's always an honor to share the stage with such illustrious guys in our sport. A lot of these guys really bring honor and respect to the business that we do.

"I don't think I've gotten as much respect as I deserve throughout my career. I don't know why, but it doesn't really matter. At the end of the day I go out there and perform. More often then not I'm victorious. 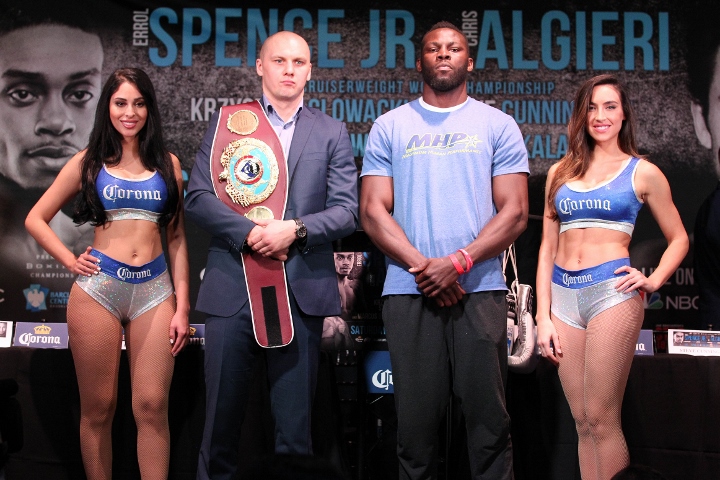 "I think everyone knows that I'll fight anybody. Spence is a guy people don't want to fight, so they brought him to me.

"The best thing about working with John David Jackson is the confidence he gives me. He let's me be who I am. He gives me the faith to trust in my abilities. I'm looking forward to putting on another great display with him in my corner.

"The hard work is done. Training camp was long, hard and grueling. Not much more to be said. It's time to fight. It's going to be a great night of fights. " 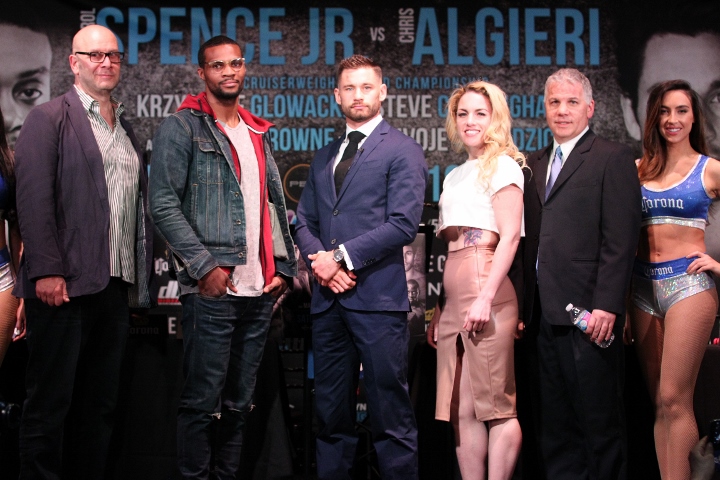 "I'm so happy to be back in the United States and I'd like to thank my team for preparing me so well.

"I'm very happy to be healthy. Training camp went the way I wanted to and I feel 100 percent ready to get in the ring

"I have to win. That's the most important thing. It's nice to be fighting on such a great card, but all that matters is keeping my belt.

"Fans can expect to see beautiful boxing. It will be a war inside of the ring. Most importantly, I will win. 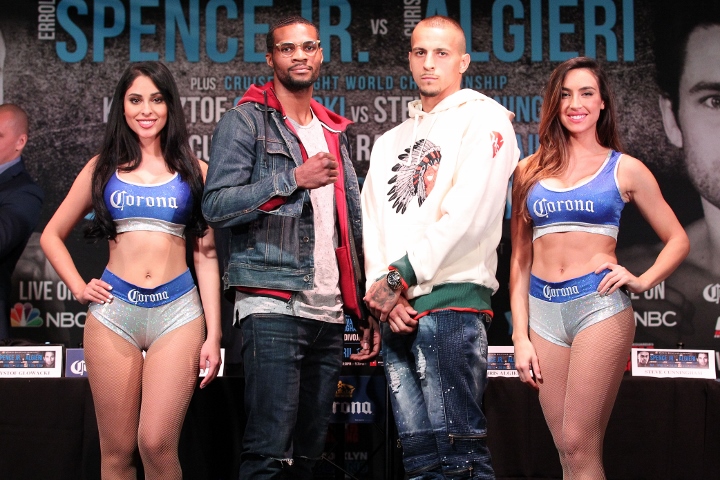 "A lot of things have changed since I won my world title. Nobody used to know me and now everyone knows me. I'm happy with my career so far. I don't like to talk about the future of my career until after the fight.

"Steve Cunningham is not only a great fighter but a great human being, so I expect a tough fight. He wants to take the belt from me but it's not going to be easy. I want everyone to come out for a great show on Saturday." 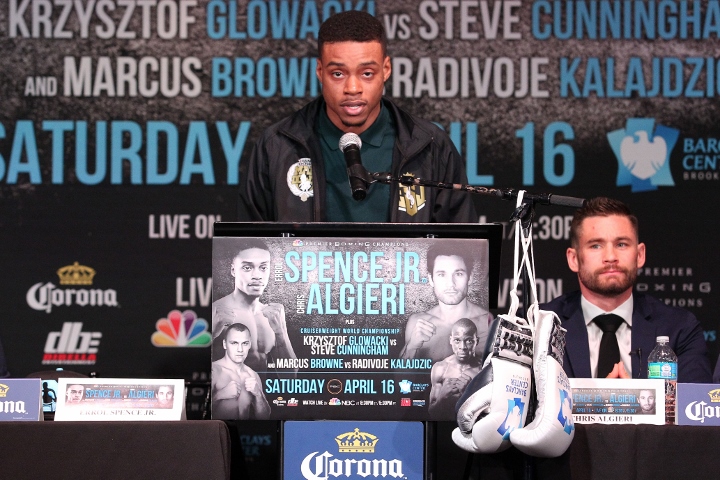 "This is my first time fighting at Barclays Center and I'm very excited about that. I'm ready to fight. Training camp is over. You know it's grueling and hard work.

"I know I have a great opponent. He took the belt from the champion. He got up off the canvas so I can't look at him lightly at all. But I'm here to do a job.

"I'm was sick of getting cheated and robbed of opportunities at the heavyweight division. I decided to come back down. It's no problem. Three pounds or four pounds, no big deal. Here we are. 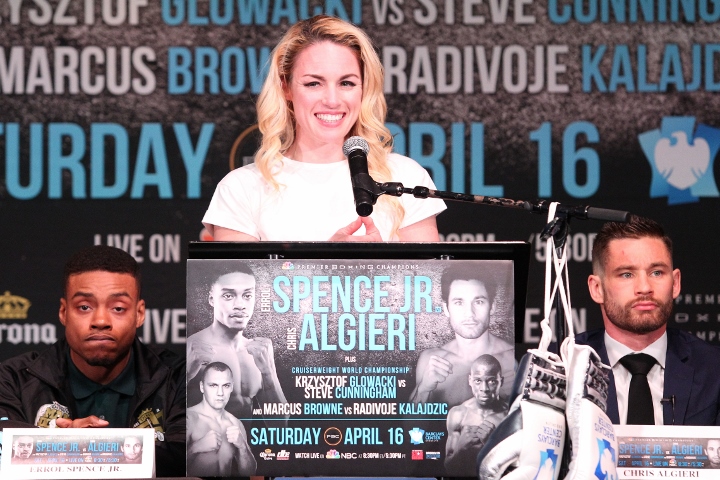 "There are some adjustments you have to make when you fight a southpaw. A guy throwing two gloves at you and you have to throw gloves back at him. Doesn't matter if he fights me upside down, I have to fight smart and beat him regardless. 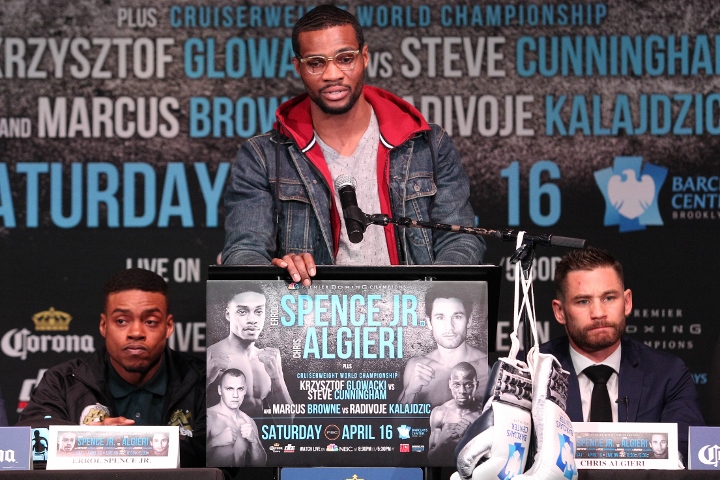 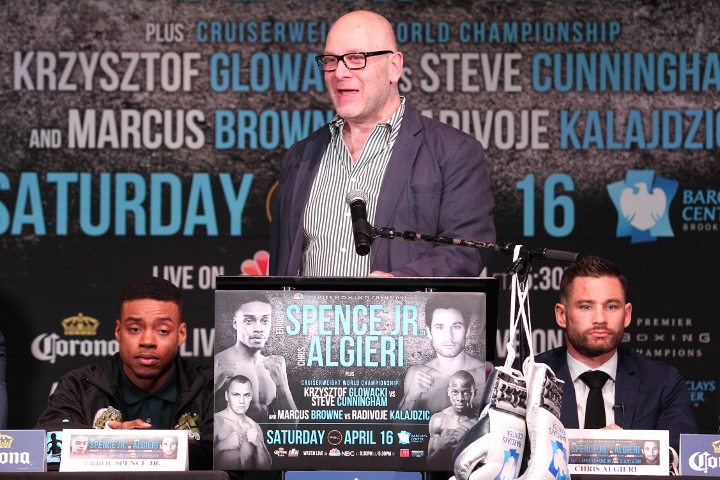 "When you beat a guy like Marco Huck who was about to make history and you beat him like Glowacki beat him, you have to think he's good and realize you can't take Glowacki lightly. He's a warrior. He's a problem, something I'm going to have to deal with.

"I'm not one of those predicting guys. I know things happen in the ring. But come Saturday night, I want things to go my way. If not, we're able to evolve. Let's go, it's work time." 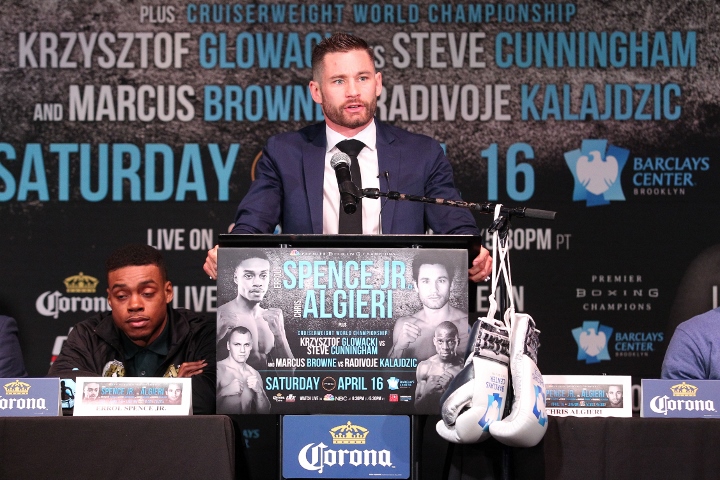 "We've done a lot of talking leading up into this fight. I want to talk with my hands. He said he's ready to fight. We'll see on Saturday night.

"I feel great. Training camp has gone great. Right now the focus is to win and look good. Whatever happens after that is going to happen.

"I'm going to do what I do best and that's take care of business no matter what.

"I'm ready for whatever he brings to the table. We will know that after the first minute of the first round. 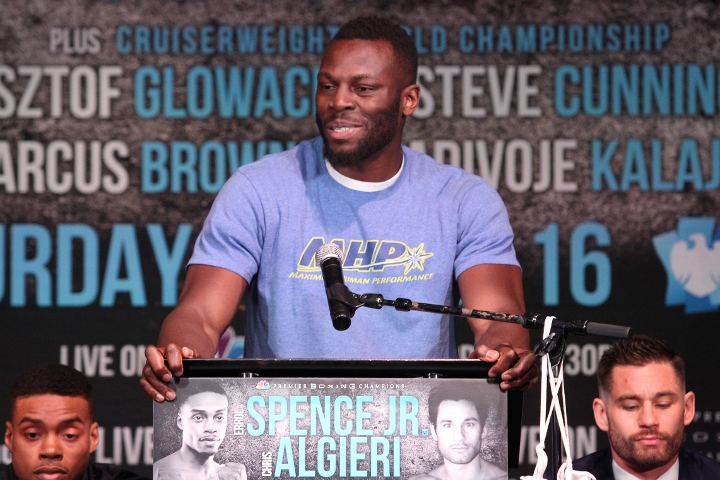 "It's an incredible honor to be representing my hometown. Fighting in front my home fans is always very motivating and I can't wait to put on another show for them.

"People have said a lot about how this will be my toughest fight. I can't listen to anything on the outside. I'm prepared to my fullest and we'll see what he has on Saturday night."

"Training camp went great. We got a full eight weeks in. Roadwork, conditioning, everything. I'm just ready to fight.

"I want to introduce myself to the fans by knocking out Marcus Browne. If that doesn't come, I want to put on a great performance. Being on the big stage doesn't bother me, once the bell rings its just another day. 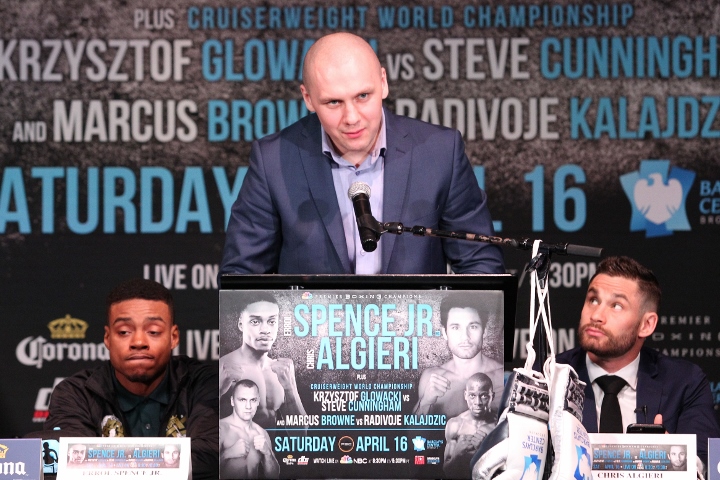 "I know Marcus is fast and has pop to him. I don't want to give too much away.

"I'm a boxer puncher. I've got the power to knock a fighter out. Most of my knockouts have come in the first round.

"I feel like I came up the right way. I didn't have that much amateur experience, but I stepped up to this big opportunity at the right time." 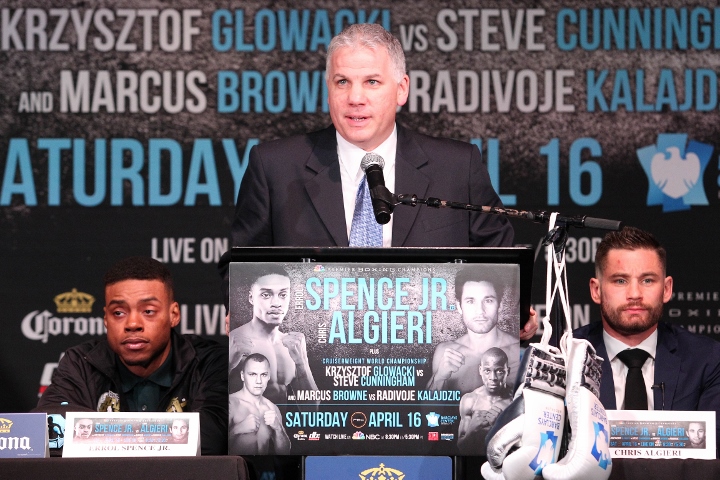 "I'm expecting to face a good strong boxer on Saturday night. She's coming down in weight to fight me, so don't miss it.

"We changed a little bit during this training camp. I added another conditioning coach. A guy that has been putting me through torture three times a week.

"My opponent is strong, she has a good record, she's from overseas. I know I have my hands full. 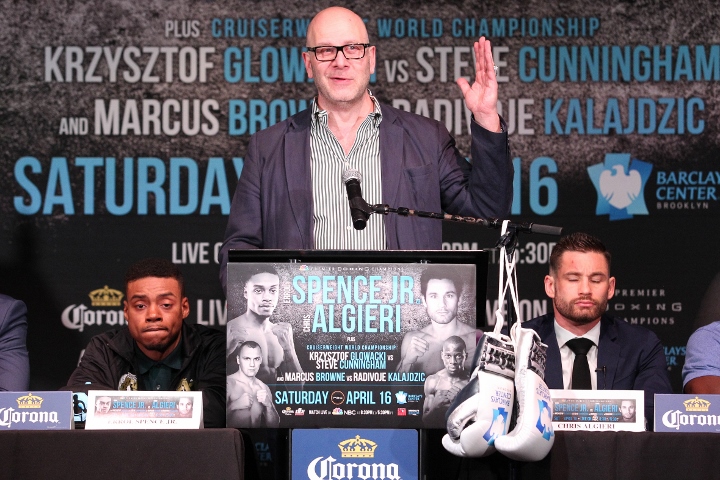 "It's a real honor to fight at Barclays Center. I couldn't ask for a better place. There's nowhere in the world I'd rather fight than right here at home. As far as my career progressing, I'd like to be up there on stage and be on TV.

"I can't wait to fight (unbeaten contender) Shelly Vincent. I think that will be the big breakthrough fight that let's me establish who I am in this game and who I am for the bigger competition.  That's a perfect fight for TV. Fingers crossed."