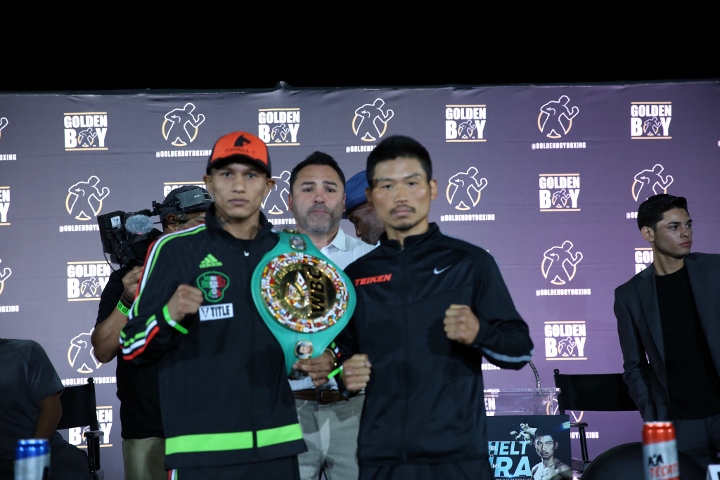 Below is what fighters on the Saturday, July 15 HBO Boxing After Dark® triple- header had to say at today's press conference: 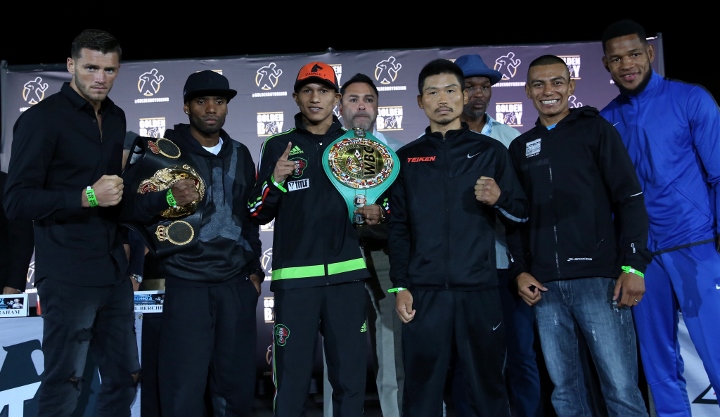 "Thank you to the Forum for hosting this fight night. Boxing here is special-I would know because I made my professional debut nearly 25 years ago in this venue just a few months after I returned from the Olympics in Barcelona. Thank you to our friends at Zanfer Promotions, Teiken Promotions, Star Boxing and Main Events for working alongside us in putting together these fights."

"Every fan knows an action-packed main event makes for an exciting night of boxing, but great fights from start to finish are even more exceptional. In the co-main event for WBA Super World Super Featherweight championship hardware, Panamanian Jezreel "El Invisible" Corrales will make his U.S. debut against Robinson "Robin Hood" Castellanos-a fighter known for massive upsets. Opening the night with another hot-pursuit for a title, current WBC International Light Heavyweight Champion Joe Smith, Jr. will put his belt on the line against Miami's Sullivan Barrera. As you may all remember, Smith, Jr.'s previous fight at the Forum resulted in handing Bernard Hopkins his only knockout loss-and we can be sure to expect fireworks in this next fight also."

"Aside from this triple-header, we also have some outstanding rising prospects fighting on the undercard that are hungry and eager to showcase their talents to the fans on Saturday night." 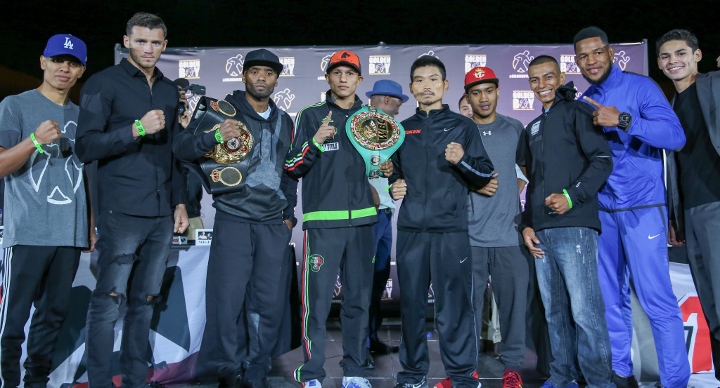 "The best part of being a part of the commission is coming to events like this, and being able to be a part of great cards. This Saturday, we will see an awesome triple header event. I love to see Oscar choosing to have more fights in California."

"In California, we have the largest number of boxing fans. We appreciate the relationship we have with Golden Boy Promotions, and the caliber of fights they bring to the state - this year they've had 24 events, with about 20 of them televised. This Saturday, you will see a great championship fight, and we are looking forward to help facilitate a safe and successful event." 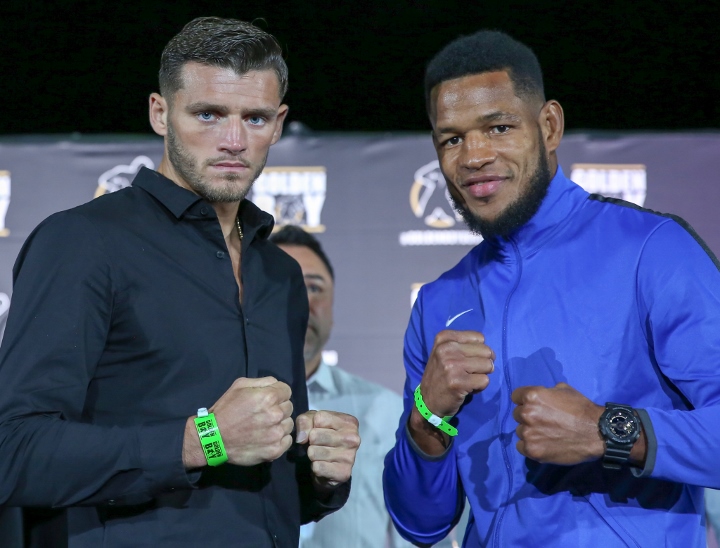 "This card brings an array of talent. We are thankful to The Forum, it's a great venue and brings great fans. It is emblematic of what we are about - not great names, but great fights because great names come from great fights."

"To get to this level, its hard water to tread - look at Castellanos who has spoiled the careers of many prospects. This is his opportunity; the first fight of his career was an eight-round fight for 200 dollars. To go from where he was to where he is today, this is an opportunity of a lifetime. I want to thank Oscar and Golden Boy Promotions who make my life easier by putting together such great cards. We have a main event where a fighter has already participated in two 'Fight Of The Year' matches already, and Berchelt who is coming off of a spectacular victory against Francisco Vargas."

"Opening the card, we have returned to the scene of the crime [The Forum] committed by Joe Smith Jr., and you have a veteran like Sullivan Barrera, who goes down to the canvas and comes back with a vengeance. You also have the co-main event with Corrales, who has gone into enemy territory to get the victory, and now will be making his U.S.A debut on HBO."

"I'd be remiss if I didn't include my thanks to the promoter partners, Joe DeGuardia of Star Boxing and Kathy and Nicole Duva of Main Events. I also want to thank our HBO subscribers and fans of the sport, without you, all of this wouldn't be possible." 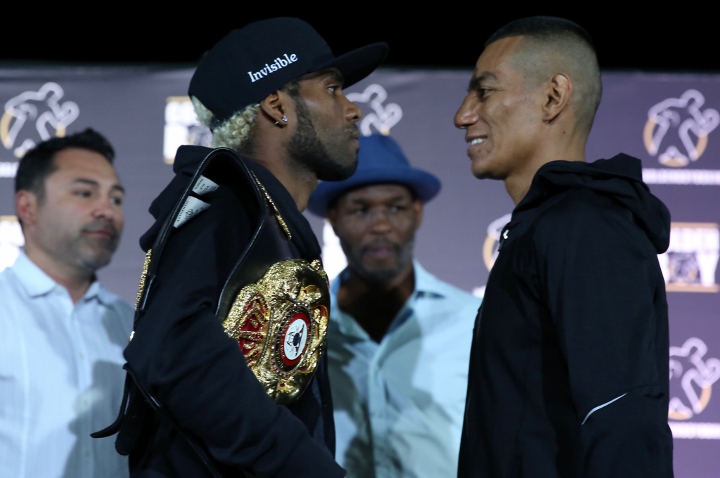 "The fights for this particular belt have been real wars. Miura is known as a Mexican executioner. There is a new rivalry that has built up - before it was Mexico vs. Puerto Rico - but now Japan has taken that place against Mexicans. Berchelt has a stinging precision. Easily, this fight is material for 'Fight of the Year'."

"The WBC was created and is always fighting to make the sport better and safer for the fighters. We are pleased and honored to have Golden Boy Promotions and Oscar De La Hoya, who has been a great friend for many years now. I would also like to thank Teiken Promotions - the last fight my father saw was Miura versus Sergio "Yeyo" Thompson. I am certain that this fight on Saturday will be 'Fight of the Year'." 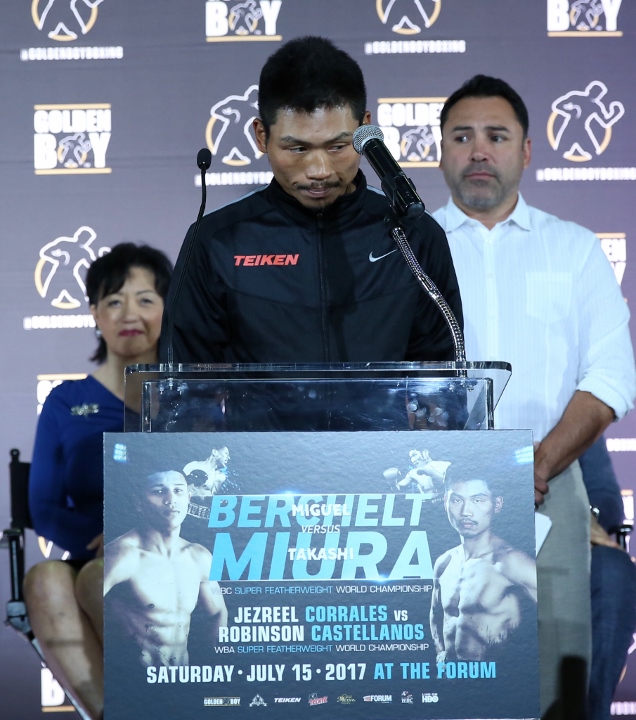 "I want to thank Golden Boy Promotions for being here for me during this transition. Like Peter Nelson mentioned earlier, we return to the scene of the fight; but I'm here as the promoter this time."

"It is a privilege to be in a historic place like this, and be a part of this scene. You have guys who have the opportunity to break into the light heavyweight division that is wide open right now. I want to speak to my young fighters, this is your opportunity to steal the spotlight. I challenge the young fighters to steal the spotlight from the big guys, in the future, they can be your best promoter. This is the hurt business, so be there to watch this Saturday." 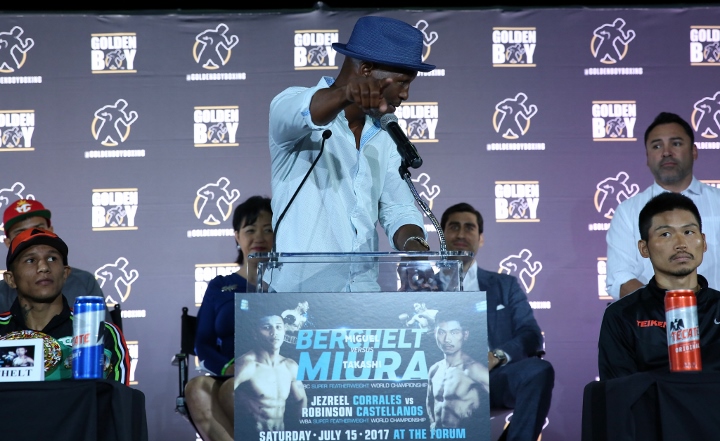 "We are happy to help put together a great triple header. Our fight is a matchup of two guys trying to move up in the rankings. This fight is also very meaningful for Sullivan, as his father will be sitting to watch his son for the first time in his career. This is extra motivation as he moves up in the sport, and will be emotional for all of us." 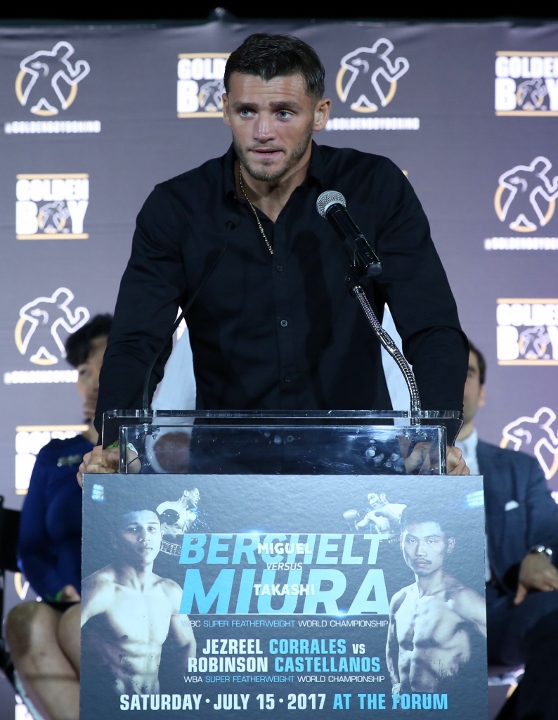 "This fight is very meaningful for me. My father has come all the way from Cuba to watch me. It's been eight years since I have seen him, and this will be the first time he will see me fight professionally. I'm thankful to Golden Boy and HBO for another opportunity. Joe Smith, Jr. is a great fighter, and I am looking forward to a great fight this Saturday." 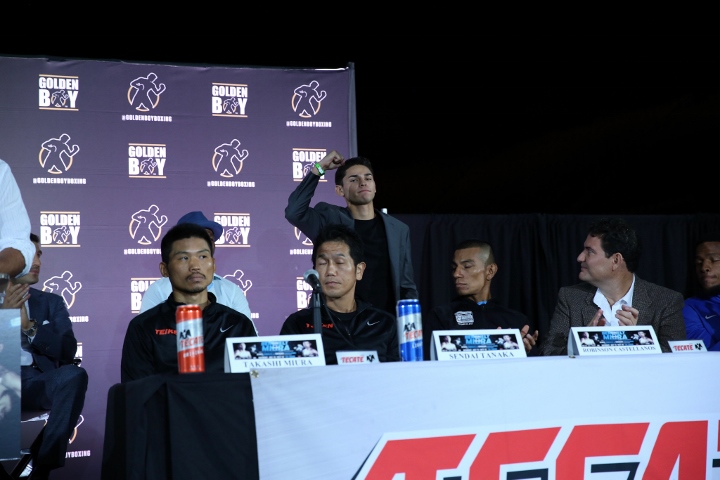 "I am glad to be back at the Forum on HBO, I am expecting a great show on Saturday. Sullivan is a great fighter. It's another great accomplishment for me and my career. I want to thank my coach Jerry Capobianco, and my team for the opportunity." 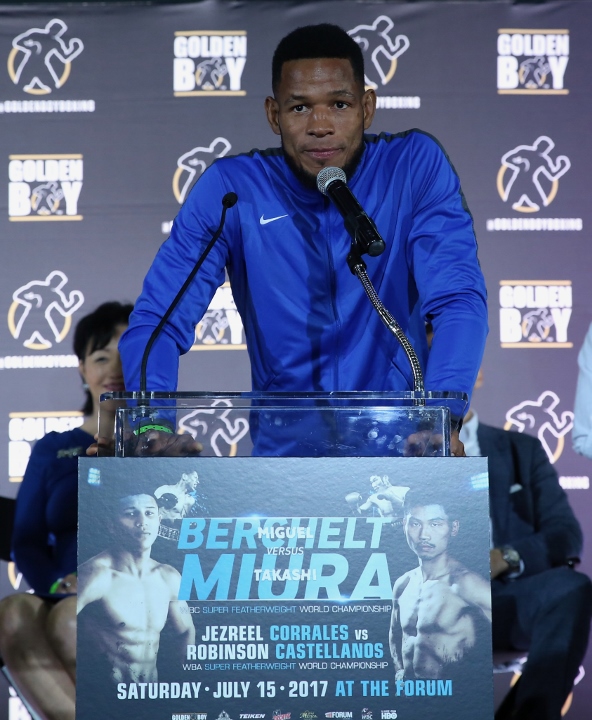 "We are thankful to HBO, and we are excited to prove what Robinson can do when he gets the shot to do it. Thank you to the press, I hope that you are paying attention to what is happening here. Castellanos is coming off of a victory over Yuriorkis Gamboa, and has stopped numerous prospects including Ronny Rios." 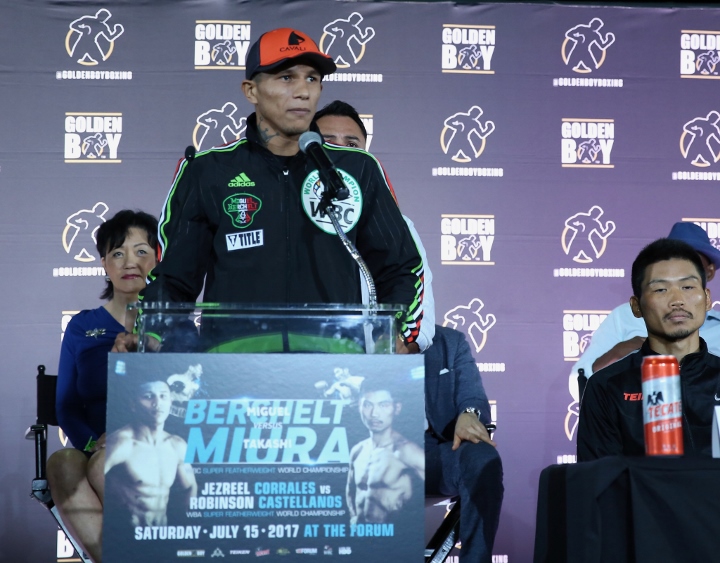 "This is literally a dream come true. I remember a couple years back, my father and I were watching Yuriorkis Gamboa fight, and we were breaking him down, and we talked about how we would try to win. Who would have thought that years later we would have been able to accomplish that? Who knows what is next. I am thankful for the opportunity, and I am excited to show everyone what I am capable of." 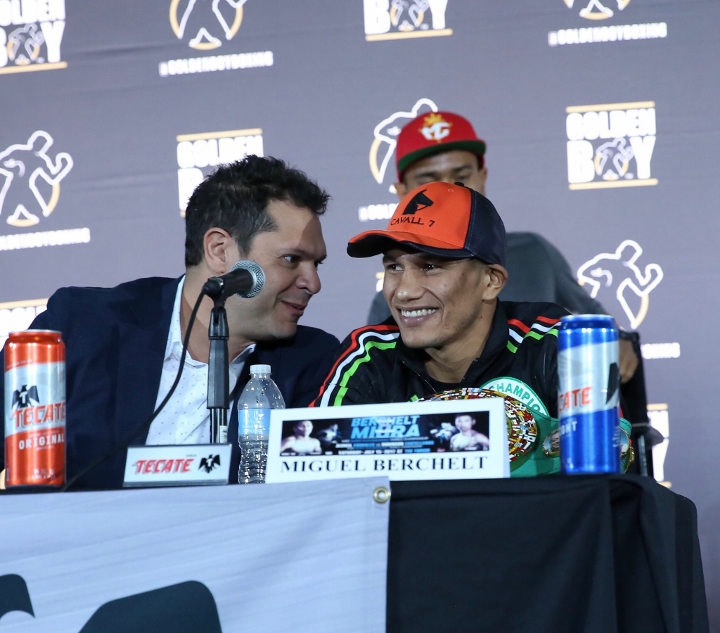 "I want to thank Golden Boy Promotions for the opportunity and to HBO for introducing my fighter Jezreel Corrales who is all the way from San Miguelito, Panama. I just want to let you guys know that he is a very technical boxer, who is also very aggressive. He is ready to put on a great show." 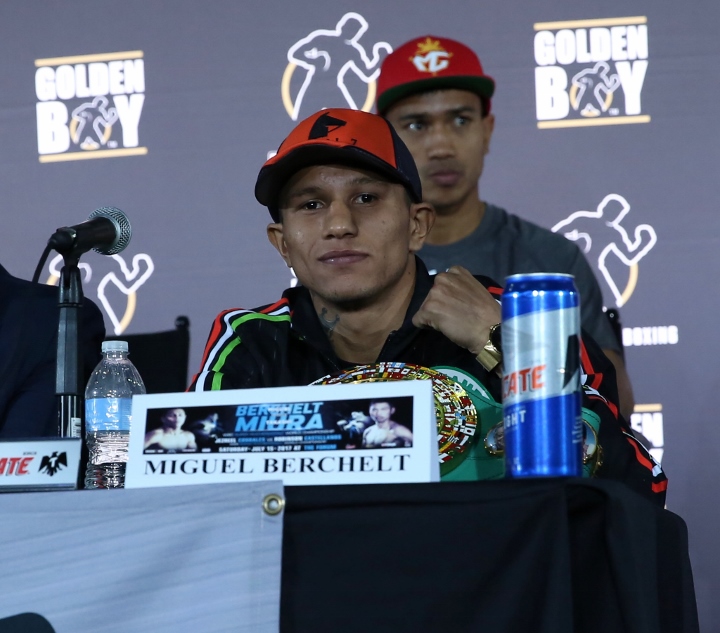 "I'm going up against a great fighter. It's going to be an interesting fight. I just turned 26, and my gift to myself is to come home with the victory."

"I want to thank Golden Boy and HBO for this great fight. We had a very good preparation and he is very ready."

"I want to thank HBO, Golden Boy Promotions, Teiken Promotions and the WBC for this fight. The champion is a great fighter, a tough fighter, but I am taking back my belt with me. Please expect a very exciting fight from me. Thank you very much."

"I want to thank everyone at Golden Boy, HBO and all our sponsors. This is our night, Miguel will have the great opportunity to fight as a champion as the main event in a great city, a great venue, a great show, and a great network. We are very excited. We know we are facing a true Japanese warrior."

"We respect Takashi Miura. He is a big puncher, he's been a world champion, and he wants the belt back. But now this is Miguel Berchelt's time. He is 25, he is a world champion, and he has been working very hard this year with Alfredo Caballero and his team. This Saturday, he is going to prove to the boxing world that he will be one of the great Mexican Champions."

"I want to say thank you to everyone, and to the media for the support. I am very happy that this is my third time fighting in the US, and the second time as the main event on HBO with Golden Boy. I want to thank Golden Boy, HBO and promoters at Zanfer for the great opportunity.

"I am very well prepared. I know I have a very good, strong, former world champion ahead of me. Takashi Miura is a typical Japanese kamikaze that is coming with everything. That's why I prepared myself very well. I respect him tremendously, and I know it's a great fight on both sides. I am going to give my Mexican people a great show, and take my belt back home."