His focus seemingly unflappable, Shakur Stevenson was briefly distracted when he heard a familiar voice as he walked out for his Olympic bout. Floyd Mayweather Jr. was in the house and shouting at U.S. boxing assistant coach Augie Sanchez.

Stevenson had been bummed out when he was told Mayweather had left the Rio de Janeiro Games. Turned out, the rumor was false and one of Stevenson's biggest fans had the best seat in the arena to watch the top U.S. prospect continue his medal run.

Stevenson, who is from Newark, New Jersey, calmed his nerves and made a lasting impression on Mayweather with a convincing win over Mongolian fighter Tsendbaatar Erdenebat. The retired, undefeated Mayweather went wild for the 19-year-old Stevenson in a unanimous decision victory that guaranteed him a medal. 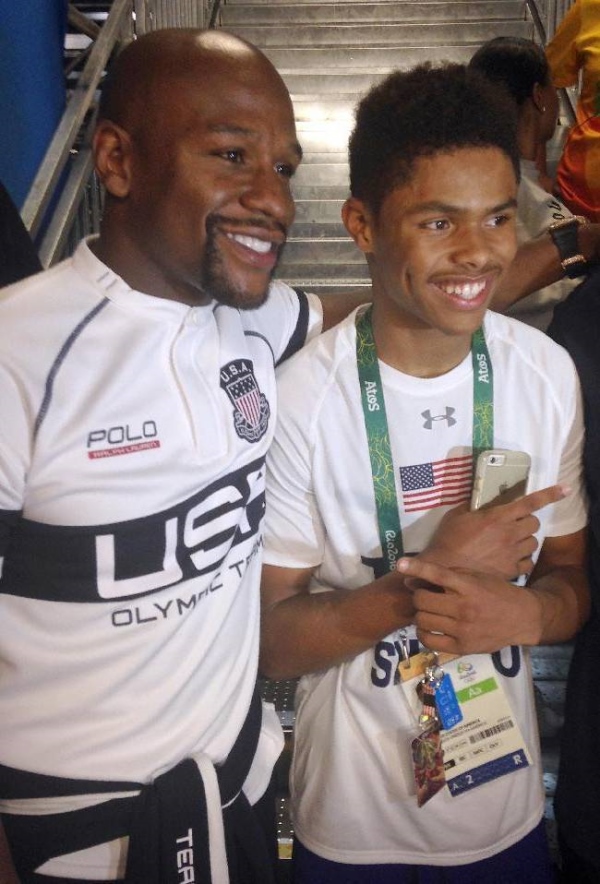 And why not? Mayweather saw Stevenson fight with a style in the ring that reminded him of another great fighter.

"I see the next Floyd Mayweather," Mayweather said. "If anybody can break my records, this young kid right here can do it. I truly believe in him."

Mayweather believed in Stevenson (24-0 in international competition) so much that he expected more than gold for Stevenson - Money May wanted the prized prospect on his blossoming Mayweather Promotions roster.

"When I saw him at my gym, I said, 'Who is this guy?' I want to sign him instantly," Mayweather said. "I thought he was a professional. They said he was an amateur but he's got a professional style. He's the No. 1 guy, of course, that I'm interested in."

Stevenson (wearing a "Team Shakur" shirt) and some friends and family joined Mayweather in the stands and posed for even more pictures. Mayweather stood to Stevenson's side and touted him as the hopeful future face of Mayweather Promotions.

"He's a great amateur and some day he's going to be a world champion at the professional level," Mayweather said.

Stevenson was asked immediately after his bout to grade his performance and gave himself a B-minus.

[QUOTE=Sterling Archer;16958658]lmfaaoo at your facts. what facts have you shown??? [B]go ahead, show me your facts stating that affirmative action helped white women more than black people. go ahead. [/B] go post your Afrocentric links showing their opinions loool :lame:…

[QUOTE=MC Hammer;16958649]Why you mad at facts? But from what I'm reading here [B]you're nothing but a Latino version of Uncle Ruckus hoping that you can wake up with blonde hair and blue eyes someday[/B][/QUOTE] :rofl::rofl::rofl:

[QUOTE=Luilun;16957312]Well Im sure Floyd can teach him about HGH and Steroids[/QUOTE] not only that, what i'm afraid of is if fraud jr teaches him how to duck worthy opponents and run like a marathoner inside the ring. the next boring…

[QUOTE=Luilun;16957312]Well Im sure Floyd can teach him about HGH and Steroids[/QUOTE] yep...i sure hope so

[QUOTE=MC Hammer;16958649]Why you mad at facts? But from what I'm reading here you're nothing but a Latino version of Uncle Ruckus hoping that you can wake up with blonde hair and blue eyes someday[/QUOTE] lmfaaoo at your facts. what facts…