Peterson: I Feel Better Than Ever, I'm Ready For Errol Spence!

Tickets for the live event, which is promoted by DiBella Entertainment and TGB Promotions, are priced starting at $50, and are on sale now. Tickets can be purchased at ticketmaster.com, barclayscenter.com, at the American Express Box Office at Barclays Center or by calling 800-745-3000. Group discounts are available by calling 844-BKLYN-GP. 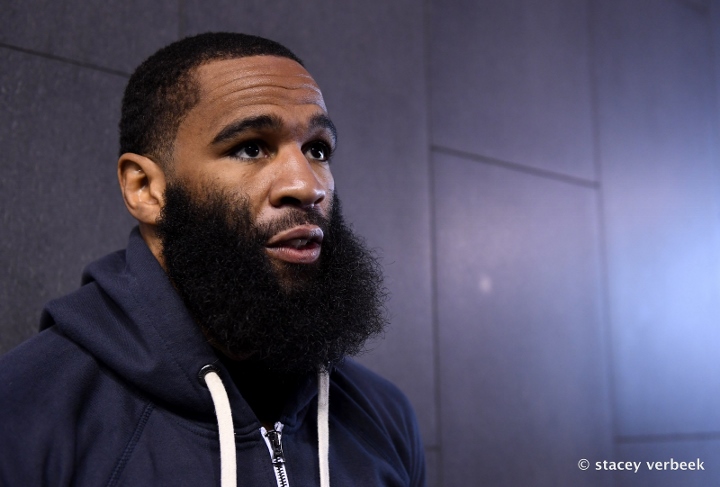 Also in attendance at the workout was Peterson's brother, once-beaten contender Anthony Peterson, who competes in undercard action on the January 20 event.

Here is what the workout participants had to say Thursday:

"I feel great. I'm already close to weight. I'm happy and eating up to five times a day. I feel strong and I'm ready for this fight.

"I have to look at this as really just another big fight. When you're at the top, you try not to make too much of each fight. We know what's at stake. I know that when I keep it simple, that's when I perform best.

"Right now my body feels better than ever. I'm comfortable with everything that's gone on in camp and I think you can see it in my body.

"I've always trained hard since the first day I came here as a child. That's been instilled in me since a young age and it's carried me throughout my career.

"Everything I do is for D.C. I'm trying to get as much recognition for this area the best way I can. That's what we all strive for in this gym. This is the biggest one that's been on the schedule for a while and I'm ready to bring it home.

"It gets easier and easier the more championship fights I'm in. I was in shape for all of them, but I definitely put more pressure on myself when I was young. I've improved each time and now I feel like I'm really at the perfect place in my career."

"I have to make a statement. I never feel comfortable with a decision. I think that's a good thing because I have to be special under the bright lights.

"Everyone knows I like to go to the body. You know I'm going to make him work so you can look out for me to break my opponent down on the January 20.

"I've been sparring with a variety of experienced fighters over the last year and they've helped me out even while I haven't had a fight. Ring rust is all mental. It's up to you to put the work in.

"I haven't gotten the fights that I want, but I'll always stick to my game and stick to my craft. I know if I persevere, things will work out for me.

"I know that I love this sport. I know that eventually I will be a world champion. I believe in my future and I'm looking forward to big fights.

"It's inspiring to watch Lamont do his thing and succeed. He's going to beat Errol Spence, even if people don't believe it. I think he's going to take care of business."

boxers dont need to interviewed to print that line. scribes should just go ahead and type it in.

[QUOTE=Wing Pingping;18400962]Sorry English is my second language, to me it sounded like a homosexual proposition.[/QUOTE] gung hay fat choy

[QUOTE=LetOutTheCage;18401054]He's going to get destroyed. Its not going to be competitive.[/QUOTE] It should be competitive if LP doesn't try to bang with him....

[QUOTE=Lemonhead_Jeff;18400051]He didn't say nothing that sounded remotely like that. [B][I]What's wrong with you?[/I][/B]![/QUOTE] Bro his name is Wing PingPing and you think the only thing wrong with him his comment. This site is going to *****.

He's going to get destroyed. Its not going to be competitive.