Peter Fury, head trainer of Hughie Fury and former coach of Tyson Fury, believes Anthony Joshua is fully capable of getting revenge on Andy Ruiz in their expected rematch.

Back in June, Ruiz shocked the boxing world when he dropped Joshua four times to secure a stoppage win in the seventh round at Madison Square Garden in New York City.

A rematch has been tabbed for December 7th in Saudi Arabia, where Joshua plans to reclaim the IBF, IBO, WBA, WBO world heavyweight titles. 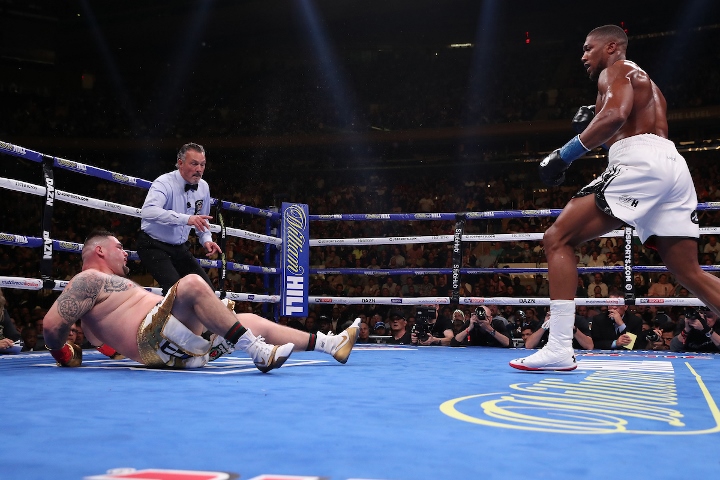 One of the mistakes, according to Fury, was Joshua not using his physical advantages in the fight.

"Anthony Joshua was bending over, making himself 5'8", so what do I make of that? Box tall. You have seen what he done against Andy Ruiz. Boxed short and got knocked out. Use your attributes," Peter Fury told Sky Sports.

"Look, no surprises, I'm not saying because Joshua has got flaws, he has, and he can work on them, but Andy Ruiz Jr has always been a world level fighter. He was a good amateur, forget his body structure, it's not a body building competition."

If Joshua uses his attributes and puts together a strategy similar to what help him decision Joseph Parker last year, Fury could see him winning an easy decision or even a stoppage victory.

"Look, use your height, use your boxing. Stop going around in a circle like that, when all your body is totally still. Get some lateral movement from the hips, because it's not just about going around in a circle. Go that way, go that way, go that way and get on your jab. Be loose. That's all he needs to do, and [Ruiz Jr] will tire out, because look, he'll start throwing caution to the wind," Fury said.

"[Joshua] could get a late stoppage or easily on points, because Andy Ruiz Jr has got the fastest hands in the world, but he's got the slowest feet in the world. He's only got to keep turning him and keep him on that long jab, keep tying him up, and he'll win it, landslide it. Same way as he fought Parker. If he does that, repeats that, he's winning it."

[QUOTE=nick_viking;20004402]AJ doesn’t jab anywhere near the quality of Vitali, Wlad or Lennox. For a guy of similar stature that’s the key. I’ve never believed AJ has used his height and reach properly and don’t see him being able to correct…

[QUOTE=MDPopescu;20004209]... True: Vitali fought tall and he was retreating under pressure... but he never ducked with head low while leaning forward -- as AJ did...[/QUOTE] Right. Shorter Povetkin was able to get to AJ a bit, even stagger him. I…

IBO is the FIFTH entity. WE DO NOT ACCEPT IT. The writer AND the entity (this) do a disservice to NOTICE 'IBO'. Believe me I KNOW WHAT I SAY & YOUall DON'T.

[QUOTE=cally83;20004247]I wish people would realise that Ruiz and Parker are different fighters. Just because it worked against Parker, and let's be honest about how big a part the paid off referee played in that performance, it doesn't mean it will…