Peter Fury: Bellew Had Haye's Number, Give Him His Credit!

Peter Fury knows a thing or two about heavyweights and heavyweight boxing; the trainer took his nephew, Tyson, to the pinnacle of the division with a win over Wlad Klitschko in 2015 and believes that his son, Hughie, was hard done by on the cards when unsuccessfully challenging then-holder Joseph Parker for the WBO title last September.

Hughie has since netted the British title with a fifth-round KO win over Sam Sexton and the division could open up for him in 2019.

Tony Bellew is also facing another big year following his back-to-back wins over David Haye (W TKO 11 and fifth-round stoppage in March 2017 and May 2018) despite initially talking about retirement following his second win over the “Hayemaker”. 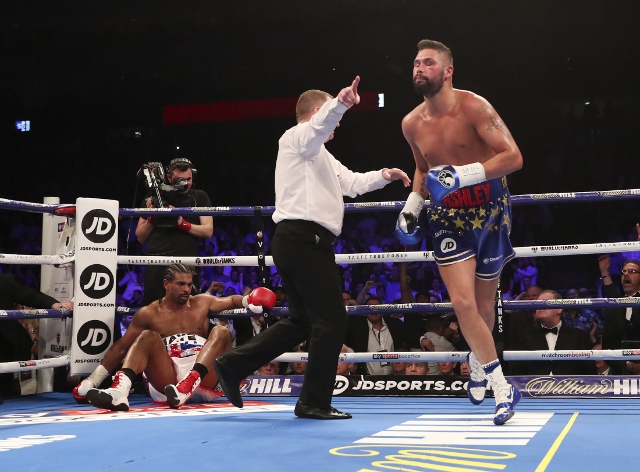 Fury spent a lot of time watching the injury prone Haye ahead of two aborted fights between Tyson Fury and the former cruiserweight champion and WBA heavyweight titlist.

In his opinion, Bellew has still not received the credit he deserves for hanging in there with the Londoner in their first fight then brushing him aside in the rematch due to the fact that Haye damaged his Achilles tendon in fight one.

“I don’t think it was down to that (injury) because Tony is a world-level fighter who came through the hard way at cruiserweight,” he said when speaking to BoxingScene about Bellew’s heavyweight run.  “Bellew is no mug, he is a world-level fighter and people need to understand that.  At over six foot and 15 stone he is not to be taken lightly by anybody.

“Don’t forget, Tony is tough and game as well — he ticks a lot of boxes.  He was the better man in both fights.  People can pick faults in the wins over Haye, and Haye’s rhythm wasn’t there because he couldn’t get the bounce into his legs so he was clearly hindered in his movement, but that is Haye’s problem.”

He added: “You cannot take any credit away from what Bellew did, he traded fireworks in the first fight then took over in the second fight and just had his number.”

As for talk of retirement, Fury told me that he believes we will see “The Bomber” in the ring again if the right fight comes along.  “Tony isn’t going to retire, he is a young fella coming off some good wins and he can provide seriously for him and his family,” he said.

“There is no reason to retire, he isn’t injured and hasn’t been in terribly hard fights so I’m sure he can carry on at the level he is at.”

How is Haye blowing out his knee "Bellew having his number"?

[QUOTE=Straightener;18931707]Can’t blame him He must have made some bank these last couple of years fair play ! Wouldn’t be surprised if we see Hughie fury vs Bellew down the line or even Tyson Seen a pic of T fury this…

[QUOTE=P4Pdunny;18931484]not ready to retire, but his mind is firmly on that road now. Big fights and big paydays..go ahead Bellew![/QUOTE] Can’t blame him He must have made some bank these last couple of years fair play ! Wouldn’t be surprised…

not ready to retire, but his mind is firmly on that road now. Big fights and big paydays..go ahead Bellew!