Jose Pedraza and Javier Molina both aim for a second straight Vegas win.

The pair of 2008 Olympians and junior welterweight hopefuls collide in a scheduled 10-round main event streaming live Saturday evening on ESPN+ from The Bubble at MGM Grand in Las Vegas, Nevada.

Pedraza (27-3, 13KOs) returned to the win column earlier this summer, scoring a lopsided 10-round win over Mikkel LesPierre this past July in this very venue. The 31-year old from Cidra, Puerto Rico previously held titles at 130- and 135-pounds, moving up in weight last September albeit in a loss to Jose Pedraza.

Molina (22-2, 9KOs) carries a four-fight win streak into Saturday’s contest. His most recent of the lot also serves as his career-best feat, scoring an eight-round nod over Amir Imam this past February in Las Vegas. 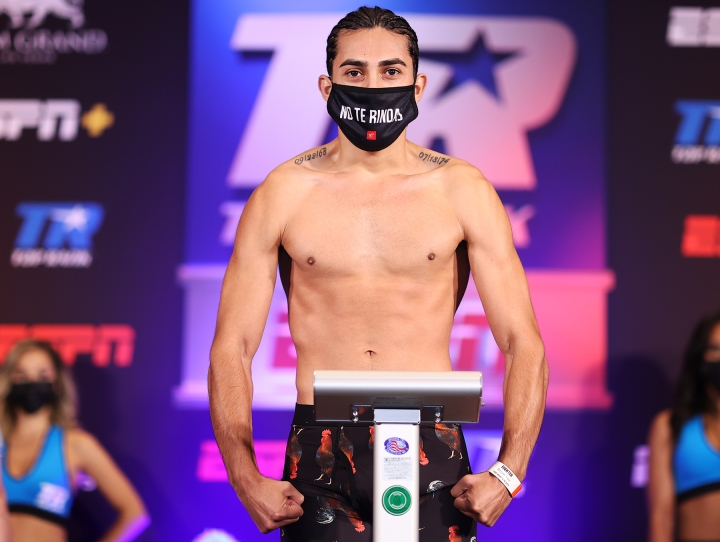 Leo Ruiz remained perfect as a pro, even if having to occasionally bend the rules to get there.

An entertaining junior middleweight affair saw the 21-year old Ruiz earn a six-round unanimous decision over Cancun’s Rodrigo Solis. Scores were in favor of Ruiz in a bout which saw both fighters lose a point for various infractions.

Solis accepted the fight on five days’ notice and—all things considered—offered a credible account of himself. His dilemma was sharing the ring with a far superior technician. Ruiz was dialed in with combinations upstairs early in the contest before adding a left hook to his repertoire later in the contest.

Both boxers were deducted one point in a wild round five. Ruiz (8-0, 6KOs) was gigged for excessive low blows, though neutralizing the infraction mere seconds later. A left hook upstairs had Solis (4-5-1, 2KOs) badly stunned, spitting out his mouthpiece to buy some time. It cost him a point as well, though in a fight he was never going to win.

Ruiz was extended six rounds for the first time in his young career.

Christian Montano was extended deeper than he has ever been as a pro.

The Colombian super middleweight from Houston, Texas was forced to go the full six-round distance in a laboring unanimous decision over St. Louis’ Ryan Adams. Scores were 60-54, 60-54 and 58-56 in an active though sloppy affair.

Both boxers came in boasting glossy knockout-to-win percentages heading into the night, looking to impose their will in the early rounds. Adams never showed any fear, connecting with right hands upstairs though catching plenty in return. Montano—who turns 22 in October—had Adams (7-3-1, 6KOs) hurt in round four but was unable to finish and showed visible signs of exhaustion through the remainder of the contest.

All of Montano’s seven career knockouts have come in the opening round, having twice been extended the four-round distance. The Kay Koroma-trained, James Prince-managed product advances to 10-0 (7KOs) with the win, though remains a work in progress.

Bryan Lua hated every bit of the 27 months he has spent between fights.

That frustration was taken out on Bubble returnee Luis Norembuena, who was flattened in the 2nd round of their scheduled four-round lightweight contest. Lua ended the fight with a picture-perfect left hook which ended the fight on the spot at 2:27 of round two.

Injuries have kept Lua (6-0, 3KOs) out of the ring since May 2018. The 22-year old from Madera, California—a career-long stablemate of unified 140-pound champ Jose Ramirez—didn’t show any signs of ring rust, even in taking a fight above his natural junior lightweight limit. Chile’s Norembuena accepted the fight on short notice, having just fought in this venue one week ago in a loss to Eric Puente, though managing to go the distance in their four-round bout.

Lua was never going to allow that, connecting with ripping right hands in the opening round. The clean punching continued in round two, capped by a left hook which put Norembuena (4-7-1, 0KOs) down and out.

Jahi Tucker made a statement in his very first pro ring adventure.

The 17-year old from Deer Park section of Long Island, New York overwhelmed Deandre Anderson en route to a 1st round stoppage in his pro debut. A barrage of punches left Anderson (1-2, 1KO) defenseless, forcing referee Robert Hoyle to stop the contest at 2:56 of round one.

Anderson is a multi-sport athlete, though boxing is not at all his strong suit. The 23-year old southpaw from Birmingham, Alabama came out winging punches from wide angles, leaving himself open to get picked apart by Tucker’s cleaner, straighter shots. Enough got through to leave Anderson out on his feet, trapped along the ropes until the fight was stopped with just four seconds to go in the opening round.

For all of the tension between the two, the aciion never evolved beyond a one-sided boxing match. The skill level of Goldston was far superior to the will for Varnell (3-3, 2KOs), with the 17-year old from Albany, New York punching in combination. Goldston also worked the body, scoring with right hooks downstairs before bringing the attack up top. Varnell did his best to make things rough for the young gun, though managing to win just one round on two of the three official scorecards.

Goldston enjoyed a successful amateur career, going 109-8 but with his 2020 Tokyo Olympics dream ending with a loss that the U.S. Olympic Trials last December in Lake Charles, Louisiana.

Tucker and Goldston both recently signed with Top Rank and manager James Prince upon entering the pro ranks.