Jose Pedraza’s first loss was by vicious seventh-round stoppage at 130 pounds to southpaw Gervonta Davis in January 2017, and his second, at 135 pounds by unanimous decision to left-hander Vasyl Lomachenko on Saturday night.

So which of the two is the best fighter overall?

A 29-year-old Puerto Rican Olympian and two-division champion, Pedraza (25-2, 12 KOs) was floored twice in the 11th round by Lomachenko (12-1, 9 KOs), a 30-year-old three-division champion and two-time Ukrainian Olympic gold medalist who added “The Sniper’s” WBO crown to his WBA version. 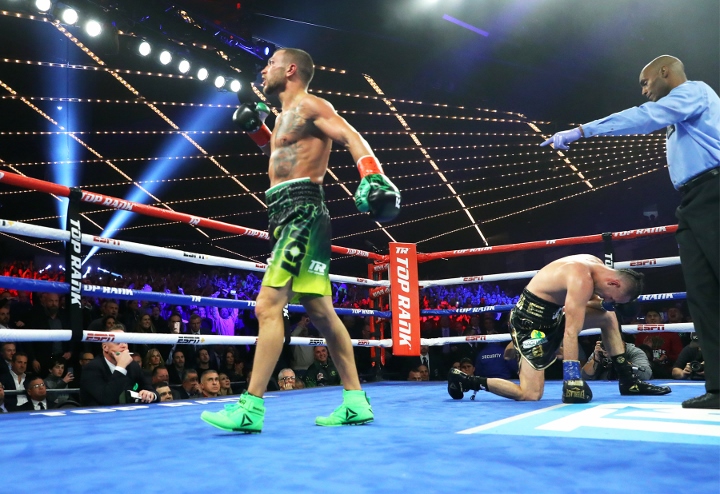 Pedraza had won three straight 135-pound bouts since rising in weight after being dethroned as IBF champion by Davis (20-0, 19 KOs) at Barclays Center in Brooklyon, New York.

Davis finished off the switch-hitting Pedraza with a brutal right hook to the jaw that had followed three equally powerful head-swiveling lefts, his eighth consecutive stoppage claiming a world title in his first try and, at age 22, making him boxing’s youngest reigning champion.

“Tank” Davis also became the second youngest champion from his hometown of Baltimore and the first Baltimore boxer to hold a title in any division since Hasim Rahman upset Lennox Lewis for the heavyweight crown in April 2001.

Pedraza ended Lomachenko's run of eight straight knockouts, including those in the sixth and seventh rounds over former titleholders Guillermo Rigondeaux (December 2017) and Nicholas Walters (November 2016).

But Davis lost his crown on the scales before his second defense in August 2017, an eighth-round knockout victory over Francisco Fonseca (22-1-1, 16 KOs) on the under card of Floyd Mayweather’s 10th-round TKO of Conor McGregor.

Davis will reportedly pursue his 12th straight knockout and first defense on  February 9 in Southern California against three-division champion Abner Mares (31-3-1, 15 KOs), who will make his 130-pound debut.

Mares had previously beaten Cuellar in December 2016 by split-decision for a WBA 126-pound title.

[QUOTE=TarasMarcenko;19516486]Name one time Loma was complacent. The guy is always 100% focused and on.[/QUOTE] One time? When he walked onto Linares straight right is what I'm thinking of. Man this threads like 2 months old. You just noticed this comment…

[QUOTE=Koba-Grozny;19342696]This ^. I wouldn't write Tank off against Loma either, he could and almost certainly would get outboxed for the entire fight right up until he landed an equaliser. Make no mistake I'd expect Lomachenko to win and win wide,…

[QUOTE=j.razor;19347487]You mean like Triple L? lol[/QUOTE] maybe, or defintely more like Canelo tho. His popularity greatly exceeds his abilities.

[QUOTE=Jab jab boom;19343105]I don't dislike him, I'm just not a fan of his. I often like rooting for underdogs over the guys that the [B]media seems to have crushes on[/B].[/QUOTE] You mean like Triple L? lol

[QUOTE=chrisJS;19343088]People are overthinking this comment. He was asked a question and gave an honest answer. An answer everyone else who's capable of understanding boxing knows.[/QUOTE] Nah, you just don't want l0m0 to look bad by going the distance with him…