Pedraza: I Forgot About Molina, But Was Happy To Take Fight When They Offered It Again

Prior to getting the phone call to the contrary, Jose Pedraza figured his previously scheduled bout with Javier Molina was simply just another COVID-19 casualty.

The two were due to meet in an ESPN-televised junior welterweight clash on May in Fresno, California. The ongoing coronavirus pandemic took care of those plans, with Pedraza resurfacing in a dominant 10-round win over former title challenger Mikkel LesPierre this past July live on ESPN from The Bubble in Las Vegas. 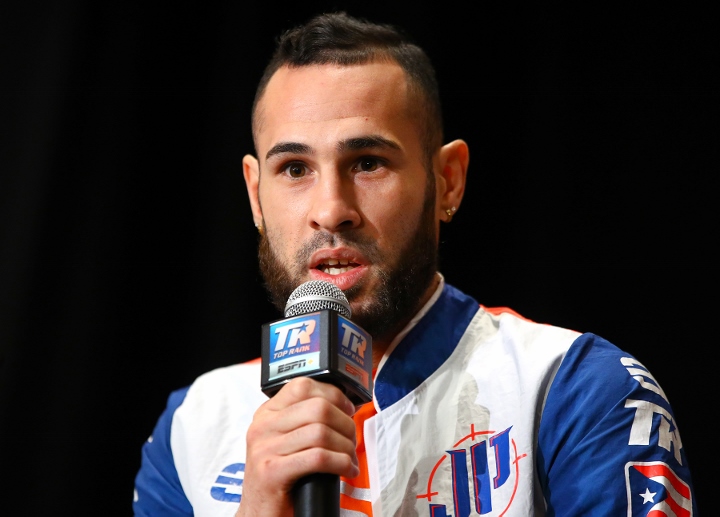 Even that fight came on a second try, having to wait out a two-week process after LesPierre’s manager tested positive for COVID. Still, he remained patient—and more importantly, in shape. The summertime win came after extensive time put in the gym, first for the canceled Molina bout and then for his earlier summer win.

“I was training when the [Molina] fight was postponed. I was training hard, in full training mode. That’s why I believe I gave a great performance against Mikkel LesPierre,” Pedraza told BoxingScene.com. “Even when that fight was canceled, I remained in training camp.

“When that fight was postponed, I stayed in shape waiting for the new date.”

Little did he know at the time that a new date would come for this fight as well.

Pedraza will return to The Bubble, facing California’s Molina (22-2, 9KOs) this weekend (Saturday, ESPN+, 7:30 p.m. ET). It wasn’t the next step he expected in his quest to becoming a three-division titlist. Then again, laying claim to the 130- and 135-pound titles didn’t come with sidestepping tough challenges.

“If I’m being honest, I forgot about the name,” Pedraza admitted of Molina. “After my performance against Mikkel LesPierre, I figured it was on to new business.

“When they offered the Molina fight again, that’s when I remembered his name and was happy to take the fight. I’m here to fight and put on a good performance, and become world champion once again.”

To expound a bit more on Pedraza's career, and his potential in the fight game. The expectations for him were that he could possibly be one of the greats. He had a combination of 3 promoter's, Lou DiBella, Gary Shaw,…

Jose Pedraza appears more comfortable at 140 pounds, he just looked to thin at 135, and 130. He might even be stronger, and sturdier at 147, pounds. Pedraza has only lost to the Davis, Lomachenko, and Zepeda, the best are…

Molina is one of those fighters that is hit and miss. He’s not bad but not good either. He’s exceptionally ok. Pedraza has a better resume and better experience. Pedraza by UD

[QUOTE=Califire209;20765229]This will be a coming out party and Molina's biggest win of his Career. Molina by upset[/QUOTE] I wouldn't be surprised...

This will be a coming out party and Molina's biggest win of his Career. Molina by upset