A pair of YouTube stars become the latest subject of DAZN's reality-based series.

Jake Paul and AnEsonGib (real name Ali Loui Al-Fakhri) will be featured in the latest edition of DAZN Originals' '40 DAYS' training camp series, which goes behind the scenes of athletes ahead of their scheduled bouts on the over-the-top (OTT) media service. Paul and Gib are part of a loaded pre-Super Bowl card—with three major title fights topped by middleweight titlist Demetrius Andrade versus Ireland's Luke Keeler—taking place January 30 at Meridian at Island Gardens in Miami, Florida. 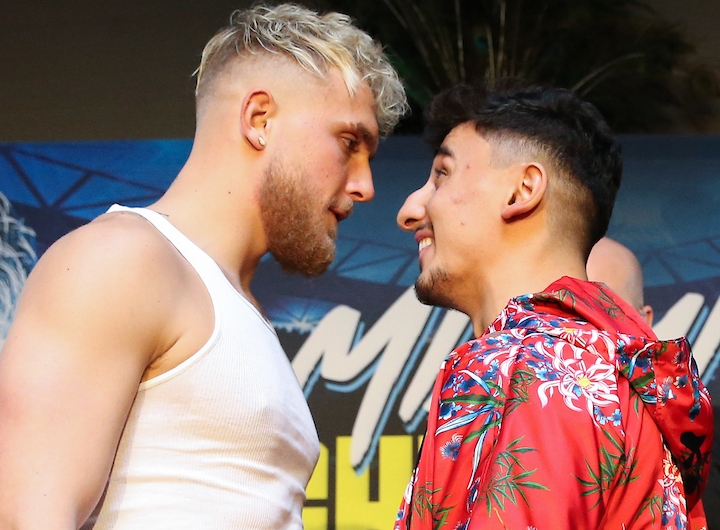 Paul and Gib make their respective pro debuts on the show. Elements of the 25-minute '40 Days' episode takes viewers into their training camp—Paul training with Hall of Fame former three-division champion 'Sugar' Shane Mosley, Gib working with Viddal Riley in Mt. Charleston, Nevada—as the two separate themselves from the YouTube world which made them social media favorites.

“Big Bear is high altitude and no distractions, you can’t escape thinking about boxing there,” said Jake Paul, whose inspiration for the bout stems from the pain felt in watching his brother, Logan suffer a loss in his own pro debut versus KSI last November. “Training with Shane Mosley, just everything clicked, and everything felt right. Gib is definitely a stepping stone but you have to step on that stone to get to the next one.

“I don’t think Gib has ever been punched in the face by someone who is pissed off and has been locked away in the mountains when I could be in LA doing fun shit.”

Paul speaks to his frustration felt in watching his brother suffer a loss his team clearly felt should have went the other way. KSI managed a split decision win in their six-round DAZN headliner last November in Los Angeles, with Jake Paul making strong accusations afterwards of the corruption he alleges to exist in the sport.

From there, came the motivation to enter the pro ranks himself. The goal is to land KSI in the ring himself, to avenge Logan's loss and play brother's keeper.

“Losing to KSI wasn’t easy but in many ways, it has given Jake an opportunity to no longer be the little brother,” says Logan Paul. “Jake took my loss harder than I did. It hurt because seeing my younger brother more affected than I am by something that wasn’t even his ordeal. I think it says a lot about Jake’s character.”

Naturally, the opponent in front of him has something to say about being overlooked for the plan ahead.

‘You lot won’t be seeing this Jake Paul vs. KSI fight,” said Gib. “Jake is getting peppered. He does not know what he is in for on Jan. 30.”

Fittingly, Gib—who is friends with KSI—is working with the same team that already engineered one loss over the Paul family. One way or another, they are prepared to deal them a second defeat, whether on January 30 or in the next ring adventure.

“I don’t like Jake and I think the whole world doesn’t like Jake,” says KSI. “If he does manage to get past the Big Gibber then yes, I will fight Jake. 100%. But that’s not going to happen, I don’t think he’s ready for Gib at all and that’s going to show on Jan. 30. I think Gib wins this hands down and that will be the end of the Paul brothers.”

At this point Adrade should begin legal proceedings to get out of his contract....he should be monumentally insulted by this