RBO might be a small title but don´t tell anyone in Team Berghult and her many fans that as they celebrated in the ring after the fight. Patricia stayed away from her opponent´s wild swings and boxed her way to a clear win. 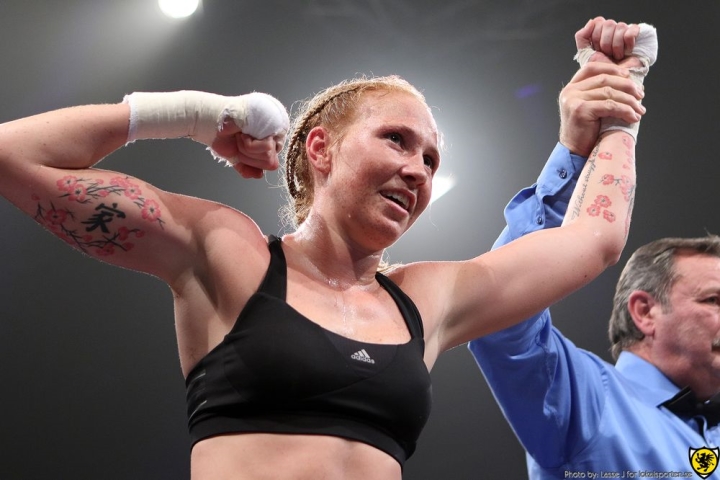 Croatian light heavyweight Marco Calic, 8-0, showed some nice moves as he outscored Georgian Bekan Mukhulishvili, 7-2, over six. Mukhulishvili swung wildly but missed with all as Calic picked him off. It was scored 60-54 on all cards.

The Afghan Lion, Israrullah Yaqobzai, 5-0, was badly cut after an accidental clash of heads against Bakar Gelenidze, 5-6-1 and the doctor stopped the fight early in the third and it went to the scorecards and Yaqobzai won on scores of 30-26, and 29-27 twice.

Gelenidze was down in the second but rattled the Afghan Lion in the third and we seemed headed for an exciting last three rounds but then it was called off.

Middleweight Johannes Vinasco, 6-1, won a close majority decision over Grigoris Nikolopoulos, 2-2, in a four rounder that was close, hardfought and exciting. It could gone either way but it was scored 39-37 twice and 38-38.

Welterweight Emil Pettersson made his pro debut and outscored Irakli Zubiashvili, 1-1, over four. The judges had it all 40-36 for the Swede.

The show did well at the gate despite the cancellation of the RBO heavyweight title fight between Pezhman Seifkhani and Nuhu Azuma and Fight Life promise to be back early next year.