Paddy Gallagher stopped Liam Wells in what was the first step up for the latter man.

The pair met at the Ulster Hall in Belfast, exclusively live on iFL TV in the UK and ESPN+ Stateside, as part of an MTK Fight Night promoted by MTK Global.

For Wells, after making a rapid rise in the paid code to 5-0, this was meant to be a coming out party, but Gallagher had other ideas. 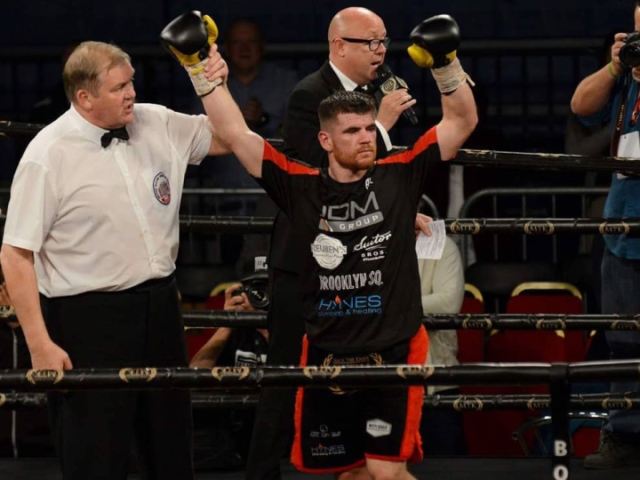 It was pretty nip and tuck until the third when former kickboxer Wells took a massive right hand which changed the flow of the fight.

A barrage of punches followed and Wells took a lot of punishment before the referee jumped in to stop the fight.

Meanwhile, Lewis Crocker kept up his flawless record against a former French champion.

The Belfast welterweight improved his ledger to 9-0 with six quick after dropping his man in the opener.

‘The Croc’ was in against Karim Aliliche and, after putting him down in the first, outclassed him over six to come away with a 60 points to 53 verdict.

And Owen O’Neill moved to 2-0 with a 39-37 points win over familiar visitor Geiboord Omier, while Frank Warren-promoted talent Caoimhin Agyarko got his fourth win as a pro, putting in arguably his best performance to date against Paul Allison and coming out on top by a margin of 60 points to 55.

But there was a big shock in the second fight of the evening as Taylor McGoldrick suffered his first defeat in the paid code.

The 25-year-old southpaw, from Belfast, was stopped by Gennadi Stserbin in the opening round of their contest and, as a result, slips to 3-1 with one quick, while Estonian visitor Stserbin improves to 2-4 with both wins coming inside the distance.