Paddy Barnes will get a world title crack when he returns.

The former WBO European flyweight champion has been out of action since last November.

Barnes will be back between the ropes on August 18, however, and will feature alongside long-time friend Carl Frampton. 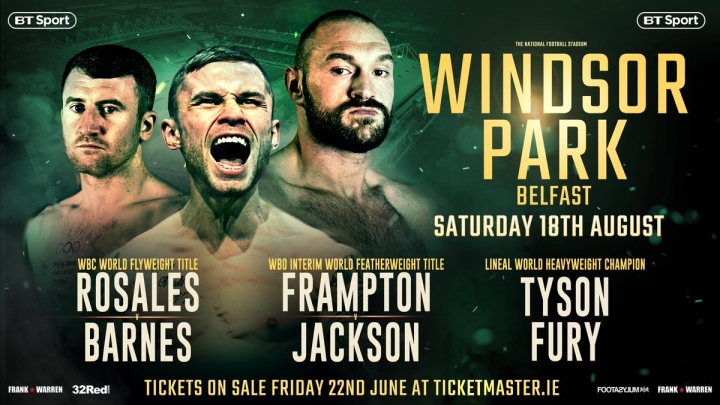 And it has been revealed that Barnes, 31, will fight for global honours on the card as he challenges Nicaragua’s Cristofer Rosales for the WBC flyweight title.

“I’m extremely excited. I’ve been boxing for 20 years and I made history by becoming a two-time Olympic medallist,” said Barnes. “Now I can become a world champion early in my pro career and make more history.”

Rosales sent shockwaves through the flyweight division earlier this year when he sensationally stopped Daigo Higa in the ninth round in Japan to win the belt.

And though it is just Rosales’ first defence, Barnes is ready to relieve him of the crown.

“My last fight was back in November but I’ve been in training camp since January as the original plan was to fight in March. It’s been frustrating but I always have faith in my management team and they’ve delivered.

“As for Rosales, he’s on a knockout streak so I know he can punch but he’s also a very good boxer. I think our styles will gel perfectly and the fans are in for a real war.

“He’s only lost three times to high-class opponents like [WBA super-flyweight world champion] Kal Yafai and [British flyweight champion] Andrew Selby. Yafai outmuscled him and Selby outboxed him. I’m hoping I can do a bit of both.

“The atmosphere on the night will be absolutely incredible. Belfast as a city is full of knowledgeable boxing fans and they’ll get behind me against a very good world champion.

“I’ve fought all around the world in massive arenas and I loved it every time. This one will be extra special as it’s in my home city. I won’t be fazed by it – it will inspire me.”

Barnes’ world title tilt will be flanked by Frampton’s clash against Jackson as well as the second fight in the comeback of former world heavyweight champion Tyson Fury.

Further details regarding the card, which is being promoted by Frank Warren and Queensberry Promotions, will be revealed in due course.

[QUOTE=NEETzsche;18871128]He's way out of his depth. He's looked mediocre at lower European level. It's like when Frank threw Jamie Conlan in with Ancajas[/QUOTE] Jamie doesn't have the superior amateur pedigree that Barnes has. Plus Ancajas is some special. Barnes will…

rosales got this ! not to sure about barnes!

Whats going on with Selby then? Beats Rosales, yet its Rosales that fights Higa. Now Selby ranked #1 with the WBC, yet its Barnes who isnt even in the top 15 that gets the fight.

He's way out of his depth. He's looked mediocre at lower European level. It's like when Frank threw Jamie Conlan in with Ancajas