WBA "regular" welterweight champion Manny Pacquiao was told by his head trainer, Buboy Fernandez, to avoid making any mistakes that saw him get knocked out cold in 2012.

In the sixth round of his fourth bout with Juan Manuel Marquez, Pacquiao had badly hurt the Mexican veteran and jumped right in to go after him in the closing seconds - but Marquez caught him with a huge counter that put him sleep.

And that's why Pacquiao was very cautious when he dropped Lucas Matthysse for the first time, in the third round of their bout at the Axiata Arena in Malaysia. 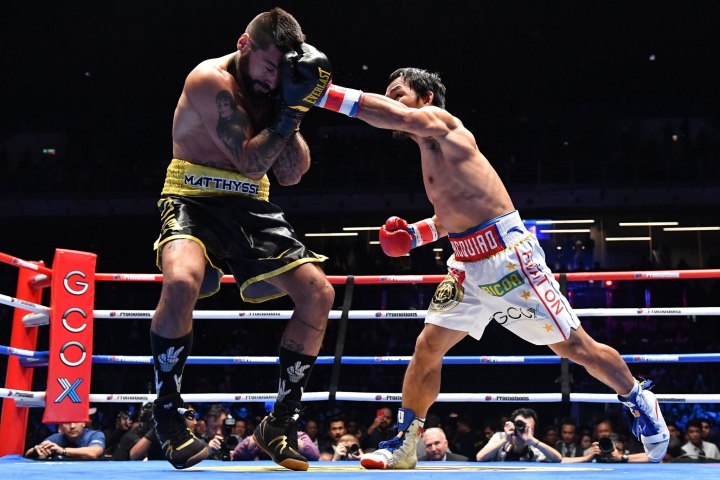 Pacquiao took his foot off the gas, but he dropped Matthysse for a second time with a temple shot in the fifth - that saw the Matthysse take a voluntary knee to recover.

And then in the seventh round, another uppercut sent Matthysse crashing down for a third time - when the contest was finally waved off.

Once Pacquiao had hurt Matthysse, Buyboy told him to take his time and eventually the knockout would come.

“Buboy told me that you got it (the fight), but do not be careless,” Pacquiao said.

“Matthysse, he had power. What we did is just take time. Our strategy is to be patient and take time. Don't rush. Don't be careless like what we did before [with Marquez]."

After a long stretch of 14 fights, Pacquiao picked up his first stoppage victory since 2009, when he put away Miguel Cotto in the twelfth round of their welterweight title fight.

The contest with Matthysse was Pacquiao's first since July 2017, which is when he lost a twelve round unanimous decision to Jeff Horn in a stunning upset at the Suncorp Stadium in Brisbane, Australia.

Now at 39 years old, Pacquiao is back in the mix for some of the top welterweight fights out there.

He was cautious like a polished vet taking his time.

[QUOTE=whoseyourdaddy;18941880]IF, IF, IF, If pigs had wings and less fat they may be able to fly. Pac look slower than ever last night, but his elite level still there, Mathysse provided Manny with a good win nothing more, congratulations to…