Pacquiao on Spence: Why Not? We'll Give Fans a Good Fight

Errol Spence Jr called out Manny Pacquiao after a dominant victory against Mikey Garcia to retain his welterweight world title at AT&T Stadium in Arlington.

Spence held onto his IBF belt and picked up the vacant WBC diamond welterweight strap courtesy of a unanimous decision against Garcia on Saturday, judges in Texas scoring the bout 120-107, 120-108 and 120-108 in the incumbent's favour.

Pacquiao sat ringside and watched the contest with a lot of interest. Prior to the fight being contested, he told reporters that he was interested in fighting the winner. 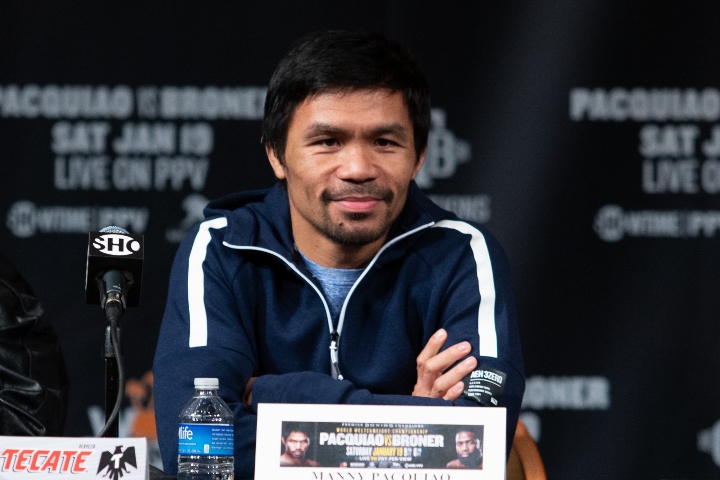 WBC lightweight title-holder Garcia, already a four-weight world champion, stepped up two divisions to tackle the former United States Olympian and the difference was clear for all to see, as Spence's superior strength, size and reach handed the 31-year-old (39-1) the first defeat of his career.

Spence, who improved to 25-0, was joined in the ring by Pacquiao after his victory, amid suggestions a bout between the pair could take place in July.

Pacquiao responded: "Yeah, why not? We'll give the fans a good fight. I'm so happy to be here in Dallas and I'm hoping I will be back here soon."

After a restrained, probing start to the contest, 29-year-old Spence began to assert himself in the fourth and fifth rounds, with a left to Garcia's impressive chin among the highlights.

Referee Jon Schorle briefly considered halting the fight as Spence punished Garcia in the 11th, but the challenger somehow remained on his feet to delay the inevitable until the final bell.

Put Manny in with Thurman

[QUOTE=JoeMan] LOL. Pac is like Viktor in the Stallone's movie Paradise Alley. He's too stupid to be scared. That's what these fanatical Mayweather worshipers/perpetual Pac-hating cult members don't get.[/QUOTE] [QUOTE=kraftzman;19593136]I remember that movie. Four brothers and they made their youngest…