As BoxingScene.com reported on Saturday, Manny Pacquiao has survived a scare outside of the squared circle.

Boxing’s only eight-division boxing champion says he has tested negative for COVID-19 after contacting politician Aquilino Pimental, who had tested positive for coronavirus.

Pacquiao and his family had been in self quarantine since March 23 but Pacquiao got clearance from any possible contraction after obtaining rapid testing kits from South Korea.

"My countrymen, I would like to make it clear that even before I received the letter from [Dasmariñas Village, Makati] Barangay Captain Rossana Hwang, I already started home quarantine," Pacquiao said in Filipino in a statement. "Using these kits approved in Korea, I tested negative. The FDA [Food and Drug Administration] hasn't approved them yet but these are what's used in Korea." 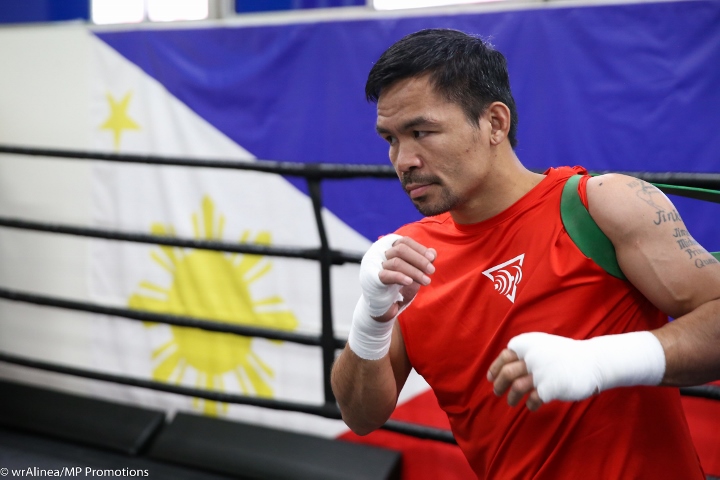 Pacquiao was considered a person under monitoring by Hwang and urged the Filipino senator to "be a model example” in a letter dated on March 27.

"I've been encouraged a while back to get tested at RITM [Research Institute for Tropical Medicine], but I want to let it be known that I have not felt any symptoms,” said Pacquiao. "It's an entirely different conversation when I'm feeling something strange in my body. I am willing to undergo swab testing for the sake of my family and my country, but I will go through the regular procedure.”

The 41-year-old Pacquiao (62-7-2, 39 KOs) was last in the ring in July 2019 when he scored a split decision win over Keith Thurman. By the time the global pandemic of coronavirus goes away and clears a path for sports to resume, it will likely be over one year since Pacquiao will have been in the ring.

"I believe that there are many more persons under investigation or PUI that should be prioritized in testing,” said Pacquiao. “I encourage everyone to cooperate with our Government … We should do what's best for us. We should also continue praying and believing in the Lord. Let us all draw strength and hope from Him. We'll get past his challenge, my fellow men. Let's believe."

Is a relief that Manny Paquiao test of Corona Virus was negative and he healthy. :grouphug::sigh1:

[QUOTE=RGJTMMRDCMJRJSM;20487378]At the end of the day, if you're with Bob, you get no say. Look at Crawford's cherry picks lately :lol1: :lol1: low blowed a shot khan, got dropped by a eurobum i haven't heard of and now.. A fighting…

At the end of the day, if you're with Bob, you get no say. Look at Crawford's cherry picks lately :lol1: :lol1: low blowed a shot khan, got dropped by a eurobum i haven't heard of and now.. A fighting…

[QUOTE=Jab jab boom;20487325]If they're in doubt of what the proper protocol is, just follow how pac has distanced himself from Terence Crawford[/QUOTE] Lol!!!!!😂😅🤣

[QUOTE=Jab jab boom;20487325]If they're in doubt of what the proper protocol is, just follow how pac has distanced himself from Terence Crawford[/QUOTE] :lol1: Damn, Pac has been practicing social distancing from Crawford for years hasn't he?