Years of hard work put into the Ring City boxing series were not put to waste at the scale.

All fighters made weight for the inaugural installment of the developmental boxing series, which airs live Thursday evening on NBC Sports Network (9:00 p.m. ET) from the historic Wild Card Boxing Club in Los Angeles, California. 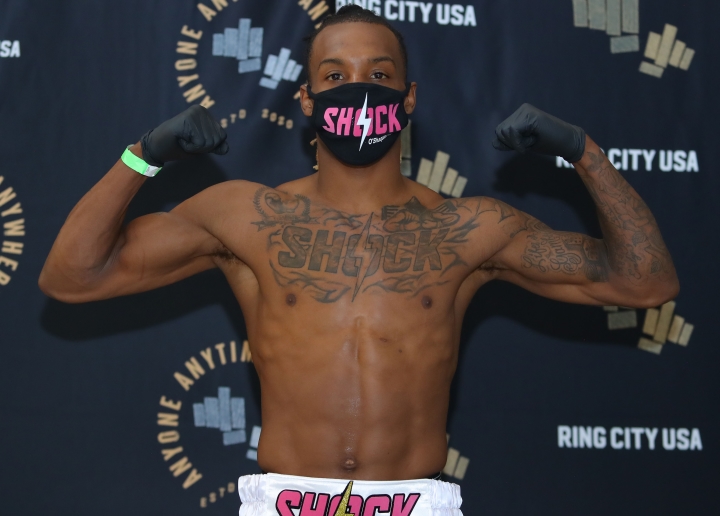 Naturally, both boxers are brimming with confidence ahead of their crossroads bout.

“I’ve got “Ice Water” in my veins and I’m here to shock the world and show that I’m here to stay,” Foster confidently stated.

As far as his opponent, Wednesday marked the first of two victories this week.

“We defeated our first opponent of fight week—the scale,” quipped Roman, who has won two straight since a title fight loss to countryman Miguel Berchelt in November 2018. “We look forward to Thursday night when we will win the fight.”

Foster has won seven straight heading into Thursday evening, including a 10-round decision over Puerto Rico’s Alberto Mercado last December.

In the evening’s chief support, Mexican veterans William Zepeda and Roberto Ramirez collide in a 10-round lightweight contest. Zepeda (21-0, 19KOs) weighed 135 pounds for his first career fight outside of Mexico. Tijuana’s Ramirez (23-2-1, 16KOs) weighed 134 pounds for what serves as his third stateside appearance. The 27-year old remains best remembered for his stunning 2nd round knockout of former lightweight champ Dejan Zlaticanin in June 2018.

Zepeda enters the bout having stopped his last 11 opponents.

Also on the show though not budgeted for live airtime, junior lightweight contender Eduardo 'Rocky' Hernandez (29-1, 26KOs) faces Mission, Texas' Eduardo Garza (15-2-1, 8KOs) in a scheduled eight round contest. Mexico City's Hernandez came in at a trim and fit 129 pounds for his first fight in 50 weeks; Garza weighed 130 pounds for his first fight in just more than a year, while aiming to extend a 10-fight unbeaten streak.

[QUOTE=NachoMan;20895280]Boxingscene has more articles on O'Shaquie than it does Canelo.[/QUOTE]Maybe he's got a good promoter?

Boxingscene has more articles on O'Shaquie than it does Canelo.