Oscar Valdez attempts the sixth defense of his featherweight title as he faces Jason Sanchez in a batter of unbeaten 126-pounders. Their bout headlines Saturday’s edition of Top Rank Boxing on ESPN, live from Reno-Sparks Convention Center in Reno, Nevada.

The fight is the second for Valdez (25-0, 20KOs) under trainer Eddy Reynoso, whose stable he joined last summer. Their first fight together saw the undefeated Nogales, Mex. native score a one-sided knockout win over previously unbeaten Carmine Tommasone this past February, also on ESPN.

Sanchez (14-0, 7KOs)—a rising prospect-turned-contender from Albuquerque, N.M.—enters his first career title fight. The bout also marks a significant leap in competition, even in coming in eight months removed from his best win, a 10-round decision over Jean Carlos Rivera in their battle of undefeated prospects last October in Panama City, Panama.

Also on the show, undefeated teenaged super featherweight prospect Gabriel Flores Jr. faces Mexico’s Salvador Briceno (15-3). Flores Jr. (13-0, 6KOs) is barely a month removed from playing to a sold-out crowd in his Stockton, Calif. hometown, which also served as his ESPN debut as the 19-year old scored a 3rd round knockout of Eduardo Pereira dos Reis. 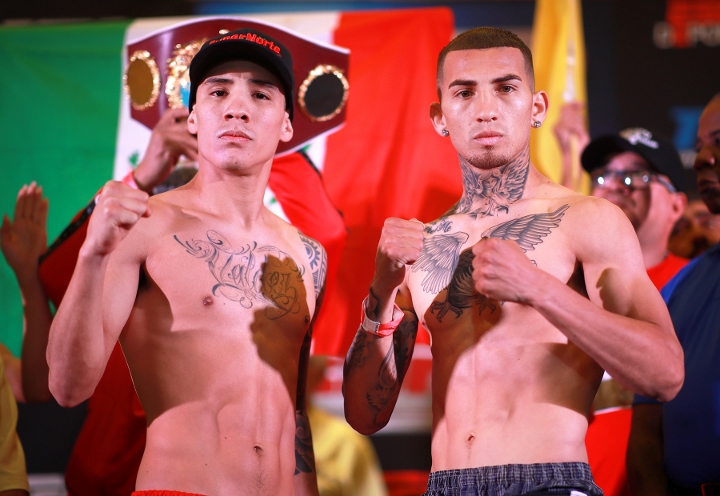 Diego Elizondo is learning early in his career that appearing in your home region doesn’t necessarily entitle you to a showcase fight.

For the second straight time in this very venue, the 20-year old lightweight prospect was matched tough and left with a four-round draw, this coming versus Sergio Vega in a fierce battle of unbeaten southpaws.

Elizondo—Reno-born and now based in nearby Carson City, Nev.—emptied his clip early, jumping out to a strong start but not at all prepared for what would happen if his foe survived the onslaught. It was his first fight since battling to a four-round draw versus Canton Miller last May, which perhaps attributed in part to his failure to properly pace himself in a competitively matched bout.

Vega showed adaptability, riding out the early storm to turn the tide in a big way in round three, stunning Elizondo late in the frame and outworking the local favorite in the final round to preserve the unanimous draw.

Michael Seals originally signed on to face Top 10 contender Sullivan Barrera in what would have served as the evening’s chief support. Instead, the Mobile (Ala.) based light heavyweight was relegated to the second bout of the evening, not sticking around for long in scoring a frightening one-punch 2nd round knockout of Philadelphia’s Christopher Brooker.

The knockout came virtually out of nowhere, considering that Seals (23-2, 16KOs) offered next to nothing for the first four minutes of the bout. Brooker took advantage of his opponent’s inactivity for as long as he could, but eventually left himself open long enough to catch an overhand right which put him down and out at 2:00 of round two.

Brooker (14-7, 5KOs) laid along the ropes for several minutes before finally coming to his senses, although suffering his sixth loss in his past nine starts.

Seals has now picked up three straight wins, and is 4-1 since his memorable three-round slugfest with Edwin Rodriguez, trading knockdowns with the longtime contender before getting blasted out in the 3rd round of their Nov. 2015 war.

Opening the telecast, Reno’s own JJ Wilfredo Mariano stopped Fresno’s William Flenoy in the 4th and final round in a battle debuting super lightweights.

Action as competitive in the first two rounds of the respective careers, before Mariano (1-0, 1KO) took control in round three. The frame began with Flenoy forgetting his mouthpiece and only getting worse from there. He was warned repeatedly by referee Jay Nady for what was deemed excessive holding before suffering the 1st knockdown of his career, getting caught with a left hook just as he landed his own right hand.

Flenoy (0-1) beat the count, but spent the rest of the round on the defensive as he complained of an injured shoulder. Mariano finished him off in the final round, going on the attack until forcing the stoppage at 0:45 of round four.