Oscar Valdez admits to eyeing possible unification fights or a move up to 130 pounds, but he is not overlooking Jason Sanchez.

With very few people giving the unbeaten Sanchez a chance of beating Valdez and winning the WBO featherweight title, it is those fighters like Sanchez that Valdez believes are the most dangerous.

Valdez will defend his WBO title against Sanchez tonight at the Reno-Sparks Convention Center in Reno, Nevada. The 12-round bout, along with the Gabriel Flores-Salvador Briceno junior lightweight bout, will air live on ESPN and ESPN Deportes (10 p.m. ET/ 7 p.m. PT). 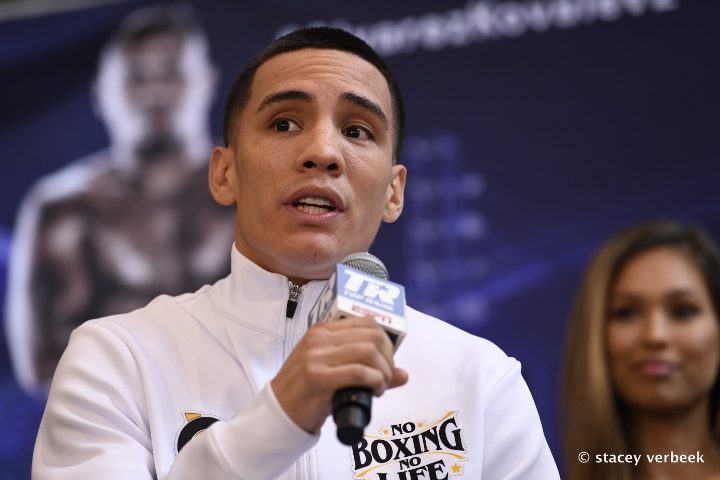 Valdez (25-0, 20 knockouts), who resides in Nogales, Sonora, Mexico, dropped Italy’s Carmine Tommasone four times en route to a seventh round knockout victory on Feb. 2. The Tommasone fight was Valdez’s first fight in almost a year since the Scott Quigg fight, where Valdez suffered a fractured jaw during the fight.

Sanchez (14-0, 10 KOs), who resides in Albuquerque, New Mexico, received the world title fight when original opponent Erick Ituarte was not approved by the WBO. Sanchez is ranked No. 13 by the WBO.

The 24-year-old will take a significant step-up in opposition against Sanchez. His best win came on Oct. 31 in Panama City, when he defeated prospect Jean Carlos Rivera by unanimous decision. In his last bout, which also took place on the Top Rank card that featured the Valdez-Tommasone fight, Sanchez stopped veteran Daniel Olea in the second round.

Despite the significant favorite to win tonight, Valdez is not overlooking Sanchez and regards hi, as a worthy challenger.

“I’m very excited about this fight,” Valdez told Boxingscene earlier this week. “Jason Sanchez deserves my respect like any contender. I’m not overlooking him. He’s young, strong, and has a dream. He’s a dangerous fighter because he’s hungry and he has something to prove.”

“Some people believe this is an easy fight because they don’t recognize Sanchez or don’t know who he is. They know who the top fighters at featherweight are. Genesis Servania was a fighter no one recognized, but he’s a good boxer and my fight against him turned out to be a great fight. I just want to keep fighting the best.”

Valdez believes having someone like Reynoso in his corner has been a benefit. Reynoso has added elements to Valdez’s skill-set including head movement and not having to stay in the pocket and trade with opponents.

Valdez is grateful to former trainer Manny Robles, who was in Andy Ruiz’s corner last Saturday night, but believes Reynoso is the right fit for him.

“I’m happy with Eddy,” said Valdez, who is managed by Frank Espinoza. “I feel that I’ve improved more with him. I have a lot of gratitude towards Manny because he’s a great person and took me to my first world title. In these two camps with Eddy, I’ve adapted to him and he’s made me a better fighter, especially working on defense and counter-punching. I see the differences and improvements because of Eddy.”

Should he come out victorious, Valdez is hopeful a unification fight could take place against any of the world titleholders at 126 pounds.

Valdez wants to face the best fighters in the division, but because of who strained relationships between promoters and fighters aligned with certain networks, that could be more difficult to make unification fights amongst fighters at 126 pounds.

Valdez does remain optimistic that a fight will eventually happen against any of the top fighters at 126 pounds. He does have a back-up plan that if a fight cannot be made, then he would move up to 130 pounds and challenge any of the world titleholders there.

“I want these fights against Leo Santa Cruz and Gary Russell. I’ll be more than happy to face these fighters. It’s nothing personal against these fighters but I want to see who the best is in the division.”

“I want to give the boxing fans the fights they want to see. I believe that the style that best fits me would be Leo Santa Cruz. If not at 126 pounds, let’s fight at 130 pounds. (Joseph) ‘JoJo’ Diaz would be a great fight, but I can see a fight against Leo Santa Cruz as the best fight for me.”

What he is gonna get is his belt taken by Stevenson.

[QUOTE=The3;19815748]If you win tonight call out Santa Cruz , LSC will take this fight is unification something that he wants, He will have to fight on FOX tho[/QUOTE] Valdez might get Russell but no way in hell will LSC fight…

[QUOTE=Santa_;19815786]That'd be nice and all but Abner Mares said it best... [IMG]https://i.ibb.co/Zcm7GL7/gwgergwe.png[/IMG] Valdez is going to get matched up against Frampton and Stevenson soon.[/QUOTE] Since he is on the other street can Oscar fight Josh Warrington?

Valdez/Frampton is what I want