Oscar Valdez has a lot of options moving forward, should he get by late-sub Adam Lopez tonight inside the Chelsea Ballroom at The Cosmopolitan in Las Vegas.

Valdez (26-0, 20 knockouts) was originally scheduled to fight Andres Gutierrez, but the fighter from Guadalajara, Mexico weighed in at 141 pounds at Friday’s weigh-in. Valdez made weight at 129.8 pounds. 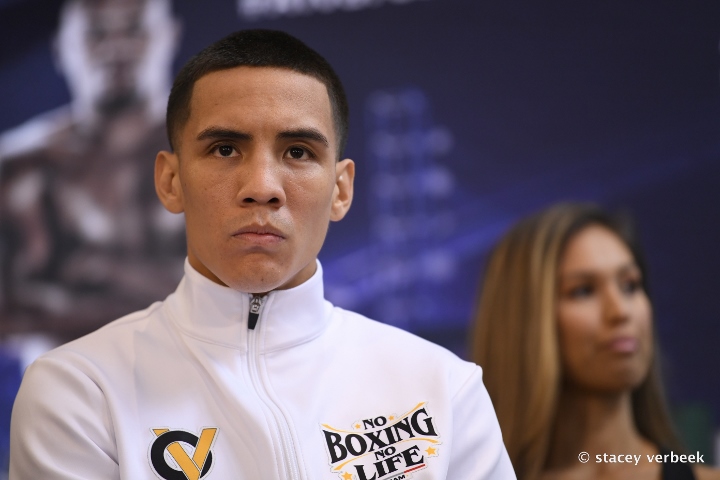 The Valdez-Gutierrez was immediately cancelled, and with the fight card taking place a day later, finding an opponent looked very bleak, especially with the card falling on a Thanksgiving Day weekend. Lopez, who was scheduled to face Luis Coria in preliminary action in a featherweight bout, immediately took the fight when approached by Top Rank officials.

Should Valdez defeat Lopez (13-1, 6 KOs), who resides in the Los Angeles suburb of Glendale, he has a lot of options moving forward. One fight that has been mentioned is a possible fight against WBC titleholder Miguel Berchelt of Mexico, who is co-promoted by Top Rank and Zanfer Promotions. Promoter Fernando Beltran did tell Boxingscene earlier this month that he and Berchelt planned on being ringside tonight in Las Vegas.

Promoter Bob Arum believes Valdez can face the other world titleholders at 130 pounds.

“It depends,” Arum told BoxingScene earlier this month. “I have to talk to Frank (Espinoza). We have two champions in (WBO world titleholder Jamel) Herring and Berchelt. We have to see which one Frank would rather fight.”

Valdez, who is originally from Nogales, Mexico and now resides in the Los Angeles suburb of West Covina, is managed by Frank Espinoza.

Valdez has been promoted by Top Rank since his pro debut in November of 2012.