Oscar “El Jaguar” Negrete (18-1, 7 KOs) once again proved why he deserves another world title shot as he soundly beat Diuhl Olguin (13-10-3, 9 KOs) of Guadalajara, Mexico via unanimous decision in the eight-round main event of the July 6 edition of LA FIGHT CLUB at the Belasco Theater in Los Angeles and televised nationally on EstrellaTV’s Boxeo Estelar. The native of Tierralta, Colombia won with scores of 78-74, 79-73 and 79-73. (photo by Albert Baker).

“I feel excellent,” said Oscar Negrete. “I give all my respect to Olguin because he’s a tough fighter who came to win. He’s a warrior and can take a lot of punches. I feel I’m now ready to fight for another world title shot. I’m back at 118 pounds where I belong, and I want the opportunity.”

“I hadn’t fought in over a year,” said Rigoberto Hermosillo. “So it took some time for me to find my distance. But then I eventually found it and stopped the fight. I’m back and I’m ready to get better. It’s up to what my team wants, but I’m ready for anyone.” 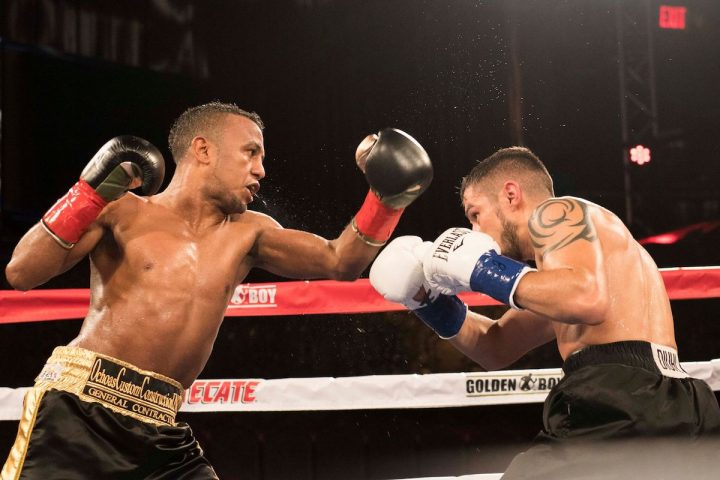 Raul Curiel (4-0, 3 KOs) of Tamaulipas, Mexico defeated Demetrius Wilson (2-8) of Florissant, Miss. via second-round knockout in a scheduled four-round super welterweight fight. Curiel stopped Wilson at 2:13 of the aforementioned round.

“He [Wilson] was kind of awkward and had an unorthodox style,” said Raul Curiel. “His shorter height was also a factor. That’s why it was kind of hard to find him. Then I got him with the hook to the body and an upper to the head and finished the fight. I felt a big difference training with Freddie Roach. I felt very strong.”

“I felt strong going into this fight and I got the win,” said Blair Cobbs. “I’m going to continue working hard in the gym with the goal to be better each time I enter the ring. I can’t wait to come back.”