Ortiz: Solomon A Different Look For However Long He Can Stick Around

With a title shot well within his sights for 2020, Vergil Ortiz Jr. wants to ensure no stone is left unturned.

The unbeaten welterweight—who has been a knockout every time out through 14 pro fights, none of which have lasted more than six rounds—looks to wrap up an almost certain 2019 Prospect of the Year run with a fourth fight on the calendar year. That moment takes place this Friday, as the 21-year old knockout faces veteran contender Brad Solomon live on DAZN from Fantasy Springs Casino in Indio, California.

“It’s another different style to face, to show that I’m ready for the best welterweights in the world,” Ortiz (14-0, 14KOs) told BoxingScene.com of this weekend’s affair. “All my fights have ended early, so boxing fans haven’t yet seen everything that I can do.

“I don’t know if (Solomon) is the guy to bring that out, but it will be a different look for however long he can stick around.” 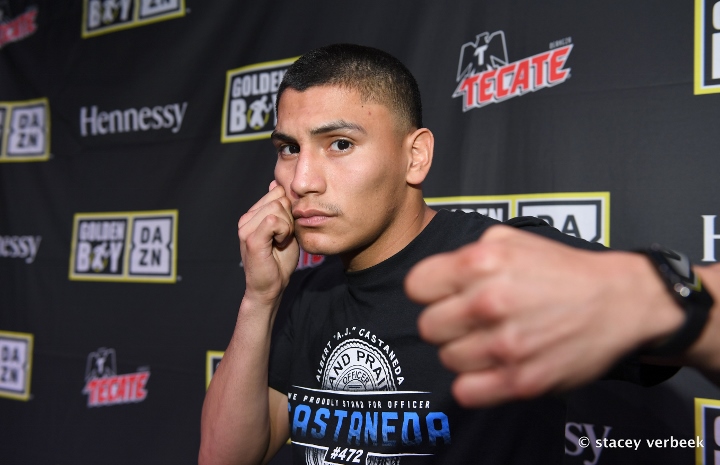 The Texas-bred puncher is coming off of a career-best win, stopping former title challenger Antonio Orozco in six rounds—his deepest fight to date—this past August. The bout took place in Ortiz’s hometown of Grand Prairie, Texas, delivering a knockout ending versus an experience foe who’s never before been stopped.

It came just three months after accomplishing as much versus former interim titlist Mauricio Herrera, whom Ortiz crushed in two rounds on the undercard of Saul ‘Canelo’ Alvarez’s middleweight title unification win over Daniel Jacobs in Las Vegas, Nevada.

Next up comes Louisiana-born Solomon (28-1, 9KOs), Ortiz’s third consecutive opponent who has never been stopped. Notable wins over Adrian Granados and Raymond Serrano led to an opportunity with title fight implications. It resulted in his lone loss, a 10-round split decision at the hands of Konstantin Ponomarev in an April 2016 battle of unbeaten prospects.

Solomon since claimed two wins, including a 10-round decision over Paddy Gallagher last April in the opening leg of an eight-man welterweight tournament that unfortunately never made it to the next round. With several opportunities slipping through the cracks, the 35-year old welterweight—now based out of Georgia—willingly jumped at the opportunity to take on one of the sport’s young guns, one who was just as eager to jump at the chance to take on a new look.

“Once they mentioned this guy’s name, a lot of people have been pointing out everyone he’s faced and how I’ll do against someone like him,” noted Ortiz. “He’s not a guy who will stand in front of me, he’s gonna make me work to get that knockout.

“It’s a challenge I want. I like that I’m going into this fight not knowing what to expect. I will just have to see what he brings to the ring and adjust. I didn’t want someone who I can just run through and take his head off, without proving anything. If I’m able to do that against this guy, I will have earned it, and once again answered any questions anyone had about me before I challenge for the world championship.”

Vergil Ortiz looks like the real deal. Extremely technically skilled with a elite amateur background and tons of power. One of the most exciting fighters today. :boxing:

Ortiz is the truth. High IQ power punching at its finest right here.