The industry continues to speak out against the latest hateful and irresponsible comments made by Manny Pacquiao as it relates to the subject of homosexuality.

The former eight-division champ and current two-term Congressman in the Philippine province of Sarangani has found himself stuck between two worlds – boxing and politics. It has been assumed that the latter side was the basis for the comments he made on Filipino TV station TV5, comparing homosexuals to animals in condemning such a lifestyle.

“It’s common sense,” said Pacquiao, a born-again Christian who gives thanks to his God in every interview these days. “Will you see any animals where male is to male and female is to female?

“The animals are better. They know how to distinguish male from female. If we approve (of) male on male, female on female, then man is worse than animals.” 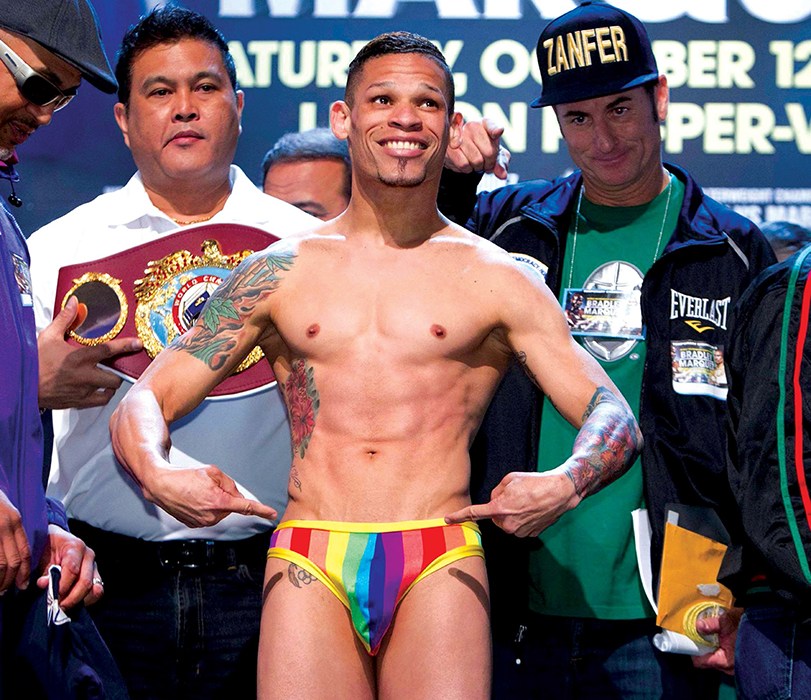 Aside from the fact that he was poorly misinformed on the absence of homosexuality among animals and creatures of all walks of life, his comments have angered the LGBT community . Included among them is Orlando Cruz, the first openly gay active boxer upon “coming out” in October 2012.

The veteran contender from Puerto Rico – who represented his island in the 2000 Sydney Olympics – is currently in training for a March 4 clash with Romulo Koasicha in a Telemundo-headlined battle of featherweight title contenders.

Cruz’ lone title shot came in Oct. ’13, suffering an 8th round stoppage at the hands of Orlando Salido, followed by an upset decision loss to Gamalier Rodriguez in April ’14. He has since rebounded with two consecutive win, but felt compelled to briefly break from training camp to comment on Pacquiao’s remarks.

“For (Pacquiao) to say that homosexuals are like animals is very irresponsible,” Cruz told BoxingScene.com. “I’m a homosexual and you shouldn’t judge me for my lifestyle.”

Also among those who deem Pacquiao’s actions  as unacceptable are Nike – who dropped the 37-year old superstar from its roster on Wednesday – as well as his own promoter, Bob Arum.

The Hall of Fame promoter – who celebrates his 50th anniversary in the sport this coming March – didn’t hesitate to speak out against his own superstar client, who is currently training in his native Philippines for a third fight with Timothy Bradley Jr. on April 9 in Las Vegas.

“I found the comments to be reprehensible,” Arum told BoxingScene.com. “I’m in favor of same-sex marriage. I’m in favor of gay rights. A lot of my friends are gays, particularly in California and Hollywood. It’s offensive to them and that’s what I’m most concerned about.

“If that’s what Manny believes, it’s unfortunate but that’s his belief. You can’t really affect somebody who is saying things that you don’t believe in but is part of their religious beliefs.”

Pacquiao has since offered an apology through his verified social media accounts.

“I'm sorry for hurting people by comparing homosexuals to animals,” Pacquiao said in a video statement translated from his native Tagalog tongue. “Please forgive me for those I've hurt.

“I still stand on my belief that I'm against same sex marriage because of what the Bible says, but I'm not condemning LGBT. I love you all with the love of the Lord. God Bless you all and I'm praying for you.”

While Pacquiao clings to the Bible for his own prejudicial views, Cruz reminds him of a passage he – and many who similarly claim to speak the word of their God in justifying their passing judgment – manages to gloss over as it relates to man, woman and child.

“Jesus said about the adulterous women, ‘He who is without sin among you, let him throw a stone at her first.’ God ask us to love one another unconditionally,” Cruz points out, referencing John 8:7 of the King James Version of the Bible.

In doing so, the 34-year old southpaw also extends an olive branch.

“I invite you to meet with me to get to know me as a human being first and I guarantee you that you will think differently,” Cruz suggests. “Maybe afterwards we can do a sparring session. Take care and I will be praying for you and your family.”

Orlando cruz vs pac on ppv. Winner takes all.

[QUOTE=hectari;16476027]Orlando Cruz message to Manny Pacquiao, [B]Pacman should accept the invitation and TR needs to fly Cruz to the Philippines, [/B]he is extending the olive branch it will be a good PR move, and have Cruz walk Pac out to…

THIS IS GOLD! HAHAHA. BUMP:boxing:

Orlando could teach manny about tolerance and acceptence.