Former 135-pound world champion Omar Figueroa Jr. eyes a statement win at 140-pounds against John Molina on February 16 at a venue to be determined in Los Angeles on FOX (8 p.m. ET/ 5 p.m. PT) .

With an impressive performance against Molina (30-7, 24 KOs), “Panterita” (Little Panther) (27-0-1, 19 KOs) hopes to generate interest in an all-Texas rematch of his amateur victory over left-handed IBF welterweight champion Errol Spence.

A 28-year-old nicknamed, “The Truth," Spence (24-0, 21 KOs), of DeSoto, will be after his fourth defense and 11th straight knockout victory against four-division champion Mikey Garcia on March 16 at The Dallas Cowboys’ AT&T Stadium in Arlington, Texas, years after losing to Figueroa as a teenager.

“I beat him in the finals of the [Texas] Golden Gloves championships,” said Figueroa, of Weslaco, Texas. “I wanna win a title at 140, first, and then, maybe unify the division. Then, I can see a fight between myself and Errol Spence somewhere down the road, which can happen when two high-caliber fighters have the same goals." 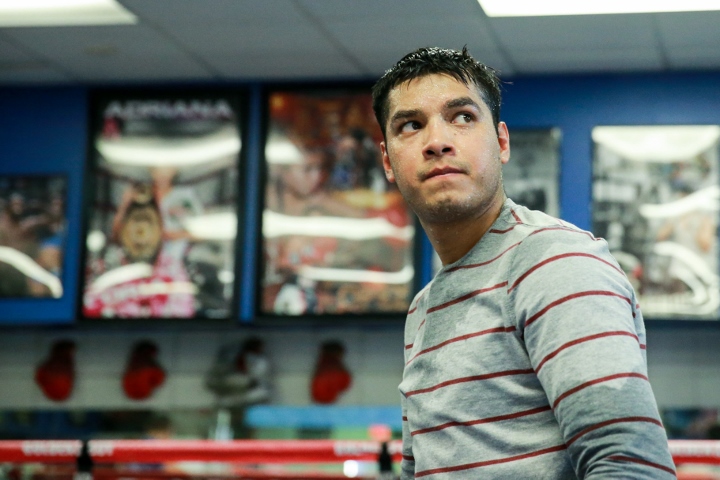 Figueroa looks to pick up where he left off in July 2017, when he ended a 19-month ring absence with a sensational five-knockdown, third-round TKO of former two-division champion Robert Guerrero.

Guerero was stopped for the only time in a career that includes beating  former champions Andre Berto, Joel Casamayor and Michael Katsidis, and decision losses to current and former champions Floyd Mayweather Jr., Keith Thurman and Danny Garcia.

Trained by Joel Diaz in Indio, California, Figueroa said he has put past hand injuries and weight issues behind him along with a January driving under the influence charge in Riverside County, California.

"I shouldn't have been behind the wheel. I own up to my mistake,” said Figueroa, adding that a shoulder injury cost him an April shot at four-division champion Adrien Broner.

“The DUI was not the reason I pulled out. It was because of a tear in my right shoulder. You live and you learn. The time away from the ring's helped me to achieve focus on mind and body.”

Figueroa, who turns 29 next month, earned the WBC’s interim 135-pound with a two-knockdown, unanimous decision over Nihito Arakawa in July 2013 and defended it in April 2014 by split-decision over Jerry Belmontes.

After beating Belmontes, Figueroa made an August 2014 defense against Daniel Estrada, stopping him in the ninth round. Figueroa vacated the crown before his next fight in May 2015, a 141 ½-pound unanimous decision over English former champion Ricky Burns in Hidalgo, Texas.

“I don’t see Molina as having any sort of home advantage. That’s because I view the squared circle as my home no matter where I’m fighting,” said Figueroa, who is ending 17 months of inactivity.

“I don’t believe in ring rust. I’ve let my body heal, and, mentally, and I feel better than ever. I don’t think I’ve been in a better place than I am now."

...truly one of my favorites, but he's had all kinds of issues the last couple of years...put him in there with Verdejo, and may the best man win!!

[QUOTE=Shadoww702;19279718]Omar is one of my favorite boxers out there. He gives you his all and is never in a boring fight. That is the only time you read about Omar and Boring in the same paragraph. His hands are what…

[QUOTE=MDPopescu;19279217]... For me, Panterita promised to become an impressive fighter... but he had brittle hands since quite early in his career...[/QUOTE] Omar is one of my favorite boxers out there. He gives you his all and is never in a…

That will very exciting fight to watch. Everyone knows that Spence is not hard to find and Figueroa loves to throw. So this could a very interesting match up.

[QUOTE=MisanthropicNY;19279029]Golden Gloves was a long time ago. I don't think Figueroa has any chance of sustaining a Spence attack at this point. Kind of like when Cotto smashed a guy who had beaten him twice before non-professionally. Figueroa is an…