Omar Aguilar Blasts Out David Alegria in Less Than a Minute

If he continues to end fights in impressive fashion, prospect Omar Aguilar is going to make noise at 140 pounds.

The unbeaten junior welterweight stopped David Alegria in the opening round Saturday night at the Auditorio Municipal in Tijuana, Mexico.

Aguilar, who resides in nearby Ensenada, improves to 17-0, 16 knockouts.

The 20-year-old Aguilar, who stopped nine of his first 10 opponents in the opening round before defeating Emmanuel Herrera by decision in December 2018, stopped Francisco Hernandez in round 3 of his last bout on December 14. 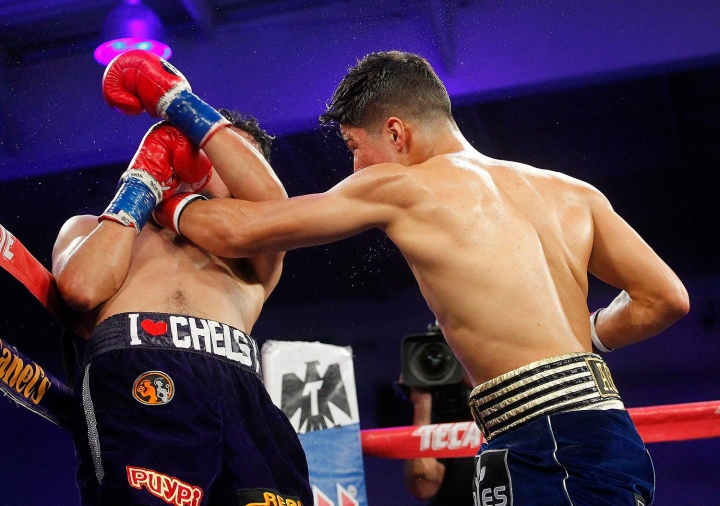 Seconds into the opening round, a sweeping left hook to the head dropped Alegria to the canvas against the ropes. Alegria beat the count, but referee Jose Cobian decided he was not able to continue, stopping the fight at 34 seconds.

Alegria, who resides in the boxing hotbed of Guadalajara, Mexico, drops to 10-4, 6 KOs. The 24-year-old has now lost three of his last four opponents.

Quijada, who resides in Hermosillo, Mexico, falls to 16-6-2, 11 KOs. The loss snapped a five-bout unbeaten streak for the 25-year-old Quijada.

The fight card was promoted by Zanfer Promotions and aired live on Azteca TV throughout Mexico.

Omar is the real deal. I was ringside for this fight and finally got to see him up close. Keep an eye on this kid.