When the World Boxing Super Series was announced, and the cruiserweight field was unveiled, it was almost too good to be true.

Four titlists with spotless records sat atop the seedings and all of them made it to the semi-finals. No one got hurt or withdrew. Then we got two outstanding semi-final matches. Neither victor was injured again. No one held up the tournament for more money.

Over a year and a half, we’ve seen the 200 lb. class, a steady source of thrills for much of the 21stcentury to date, whittled to two battlers who earned their way through in tough fights that can only have made them that much better before this collision. Now they square off with everything on the line. Four belts, the lineage of a class without a true champion in years, bigger paydays down the road, and the chance to say they won the first, successful, World Boxing Super Series tournament.

That’s what is at stake for Oleksandr Usyk and Murat Gassiev Saturday in Moscow (KlowdTV, 3 PM EST).

It’s as boxing delivering the best of itself. 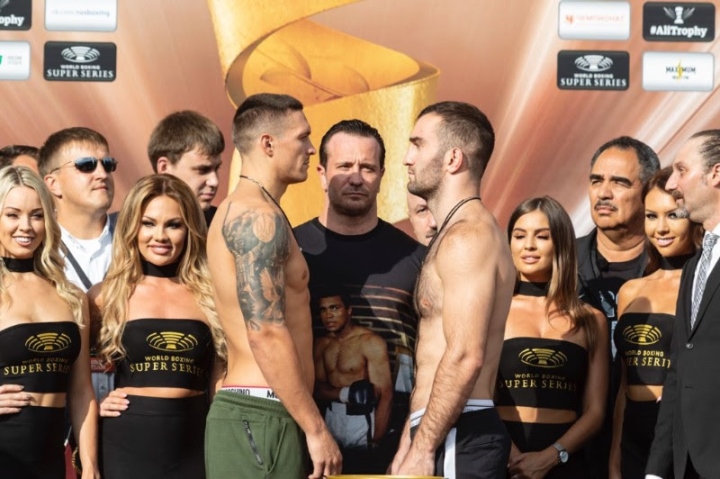 The Case for Usyk: Usyk is the more mature fighter of the two, both in terms of age and depth of experience. While Gassiev has more professional fights, and their professional resumes are about equal, Usyk also draws on an exemplary amateur foundation. The 2011 world champion and 2012 Olympic gold medalist at heavyweight was pegged as one to watch from the time he joined the paid ranks. Standing eye to eye with the biggest puncher in his class, Usyk will need those boxing chops. He can sometimes be flat footed but when he is Usyk works well off the jab and mixes up the velocity on his shots. He still moves more than Gassiev and would be well served not to stand still long. Usyk can be caught but he’s not an easy target and throws a nice sneaky lead right to the body that should be open for him Saturday. Usyk’s edge in reach will serve him well. Gassiev blocks and sometimes subtly slips shots well but he also can sometimes find himself waiting for his opponent to stop throwing to respond. Usyk typically starts faster in terms of punches thrown but both men increase their output as fights move along. Usyk didn’t slow down or shrink from a physical encounter against Briedis. He warmed to the combat. If Usyk can take advantage of the early rounds with sheer activity, it could build a cushion that serves him well if it gets tight late. A Usyk who avoids sustained trading and controls the range of the fight will be hard to defeat without a knockout.

The Case for Gassiev: Gassiev showed character, stamina, and enduring power in his win over Dorticos. This is a man who is dangerous as long as he’s standing. He is also a fighter who is still refining. Only 24, he’s shown improvement at each new level of challenge he’s faced. He is also a fighter who builds momentum. In his two toughest fights to date, against unified titlist Lebedev and Dorticos in a unification clash, his activity increased steadily all night. Displaying power and a solid beard so far likely is as mentally as it is physically taxing for opponents. He keeps coming with heavy consequences and very little wasted motion. He didn’t stop Lebedev but he dropped him, a tough feat. That he carries power in both hands makes it even more dangerous. If Usyk appears a hair quicker and more fluid, Gassiev is compact, explosive, and more concussive. A lot of the advantages for Usyk resemble those possessed by Dorticos but Gassiev picked off enough shots behind his high guard to make his compact offense more meaningful. He can do that again versus Usyk and Usyk hasn’t been hit by anyone like Gassiev yet as a pro.

The Pick: This is an equally matched fight where both men have apparent advantages and disadvantages the combine in most promising fashion. Gassiev had a slightly tougher time technically with Lebedev than he did Dorticos and that may have reflected the southpaw stance of Lebedev. Usyk may resemble the advantages of Dorticos, but he’s fighting from the other side and that may make the overhand right Gassiev likes to throw harder to get home. It won’t make it impossible and Usyk, while defensively responsible, is still hittable. Barring a surprising early knockout, this looks like a fight that can last a while if not all night. Usyk may build an early lead but can he hold it? The judges are neutral (two from the US, one from Belgium) but that doesn’t discount the home court for Gassiev. Fighting in Moscow in a fight that could get tighter as it moves along, the heavier hands of Gassiev and the roar of the crowd could count in close rounds. Usyk eked out a close one on the road against Briedis in the semi-final. Usually in a tough call the better boxer feels like the right side of the coin flip. The pick here is Gassiev based on a second half surge. If he doesn’t stop Usyk late, he’ll do enough to sway the judges in a fight that leaves fans talking and maybe even hoping for a rematch sooner than later.

I have Gassiev for this. I don't dig Usyk's weird style and although it might take Gassiev half the fight to get accustomed to it, I can still see him pouring it on late and maybe doing a Dorticos on…

Funny how when you actually see the fighters together you realize how inaccurate height and probably reach measurements are for them.