Last month, Usyk returned to the ring in his second fight in the heavyweight division - and won a very tough twelve round unanimous decision over veteran Derek Chisora. 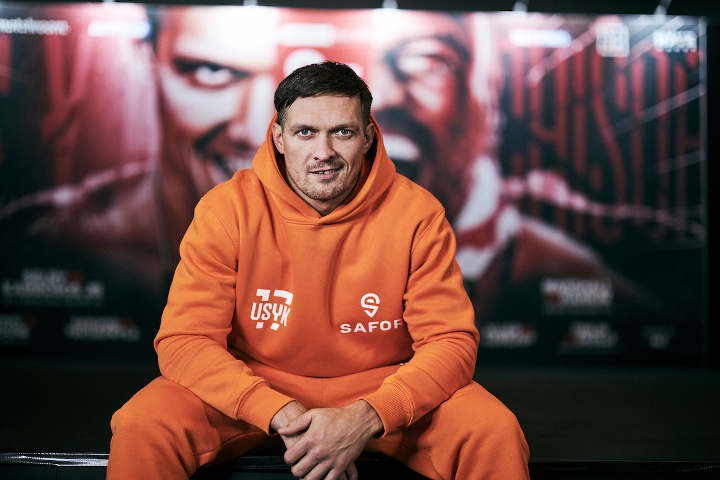 Usyk's co-promoter, Alexander Krassyuk, says his boxer will not step aside from his mandatory shot.

Joshua, should he win, is going to target a full division unification with WBC champion Tyson Fury.

But unless Usyk steps aside, then Joshua will be forced to vacate his WBO title in order to face Fury.

"Fury may fight any time he feels convenient. Usyk has gone through eight months of hard work getting prepared for Derek Chisora. Now he needs to step back a bit and get some treatment for his body and relaxation for his mind," Krassyuk told Sky Sports.

"Hopefully he will be ready to return in April 2021, and hopefully AJ will be around to comply with WBO mandatory regulations. If not - we will be fighting for the vacant WBO title with a contender appointed by WBO."

Daniel Dubois is ranked at number two with the WBO.

If he beats Olympic silver medal winner Joe Joyce on Saturday, then he could very well face Usyk for the vacant WBO title in 2021 - if Joshua drops the belt.

"I wish we could choose the opponent for the vacant title! Before thinking of Dubois or anyone else we need to know AJ vs Pulev winner and their strategy for the future. But the thing I can make really clear is that we will be pushing hard to put our mandatory position in effect," Krassyuk said.

Tyson v Joshua in April /May and most probably Ussyk v Parker for vacant title, so Fa loses out, their own fault for taking so long to negotiate the Parker fight. Then after Fury v Joshua 2 the winner faces…

[QUOTE=TampaBayTimmy;20910220]Joyce will school Usyk? He didn't when they fought in the USSB a few years ago. Watch it on YouTube. Cheers.[/QUOTE] sorry for my english, not even my second language, what i meant is Usyk>Joyce>Dubois

[QUOTE=pollywog;20909617]Usyk v Parker would be the fight to make from a boxing purist perspective.[/QUOTE] Yes, that would be a good one. But Usyk wants a HW title. That's the goal. And a win over Parker does not get him that.

Really obvious by now that the last thing Hearn wants is AJ to step in the ring with Usyk. Even after his unconvincing performance against Chisora, where he was bullied for the first half of the fight.

Joyce will school Usyk? He didn't when they fought in the USSB a few years ago. Watch it on YouTube. Cheers.