The road to finding an opponent has been uneven.

None of it matters once the bell rings. Saturday (DAZN, 7 PM EST), chapter three of the Oleksandr Usyk (16-0, 12 KO) story gets underway.

The first two chapters couldn’t have gone much better.

Before the 32-year old Ukrainian made a splash in the paid ranks, he had about as good an amateur career as one could wish for. BoxRec lists him amateur record at 335-15. Along the way, he won bronze at the 2009 World championships, Gold at the 2011 Worlds, and Gold at the 2012 Olympics in the heavyweight division.

Having turned pro in 2013, he’s done nothing but keep adding to his trophy case. In just his tenth pro fight, he won his first major title in 2016 with a lopsided decision over Krzysztof Glowacki for the WBO crown.

Three fights later, he began his run through the World Boxing Super Series, defeating Marco Huck in 2017. In his two 2018 tournament fights, Usyk bested Mairis Briedis and Murat Gassiev, adding the WBC, WBA, and IBF titles to completely unify the division. Following the tournament, he beat a Tony Bellew who never lost his WBC belt in the ring. All four of those fights came with Usyk traveling to his opponent’s home turf.

It was enough to garner Usyk near universal acclaim as the 2018 Fighter of the Year.

Usyk is expected to start chapter three with a win. That was the case when he was initially slated to face veteran Carlos Takam in the spring. When an injury to Usyk delayed his arrival in the unlimited class, the opponent changed but the expectation remained. Now that Tyrone Spong has come back with a failed test, the expectation of victory is even stronger.

Usyk was never going to debut in the class against one of the major beltholders or Tyson Fury. The slide to Chazz Witherspoon (38-3, 29 KO) leaves this weekend feeling a little like a formality. The 38-year old Witherspoon has won eight in a row since a third round stoppage loss to Seth Mitchell in 2012.

None of those eight are Usyk. Neither was Mitchell.

What Usyk is battling as much as any particular foe is a bit of history going forward.

Only two others who won titles in the lower division ever even won a single belt at heavyweight. One of them had to give the strap back.

James Toney won a decision over John Ruiz for the WBA in 2005 only for a failed PED test to render the outcome a “No Contest.” David Haye captured three of the four major titles and the lineal crown from Jean-Marc Mormeck before defeating Nikolay Valuev for the WBA heavyweight strap. Haye made two defenses before losing a wide decision in a unification battle with Wladimir Klitschko.

Other cruiserweight champions have been a mixed bag with no title success. Vasily Jirov had a war with Michael Moorer but ended on the deck. Steve Cunningham famously had a rising Tyson Fury on the deck but couldn’t finish him. Tomasz Adamek and Juan Carlos Gomez fell short in attempts at Vitali Klitschko. Mormeck was badly faded when he got into the ring with Wladimir Klitschko and would have been unlikely to compete much in his prime. 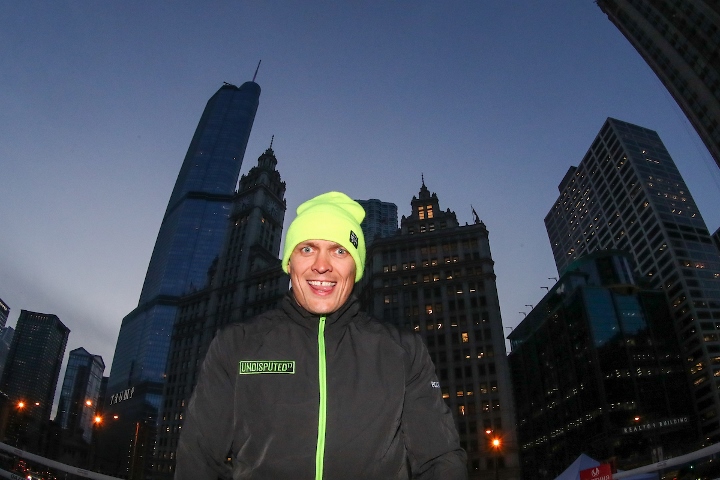 There is a feeling among some that Usyk may be the best cruiserweight since Holyfield and the best positioned to make the sort of run others could not. He arrives at an interesting time.

The heavyweight landscape of the moment is dominated by rematches.

In November, WBC titlist Deontay Wilder (41-0-1, 40 KO) faces veteran Luis Ortiz (31-1, 26 KO) in a rematch of one of the best heavyweight fights of the decade. If Wilder wins, he heads to a showdown with lineal kingpin Fury (29-0-1, 20 KO) in a sequel to the fight that launched a million gifs. December will feature the return between unexpected WBA/IBF/WBO titlist Andy Ruiz (33-1, 22 KO) and the biggest ticket draw in the division in decades, Anthony Joshua (22-1, 21 KO).

Any or all of these men could be in Usyk’s future and Usyk will probably want the future to arrive sooner than later. Unlike Holyfield, he’s not crashing heavyweight in the heart of his physical prime. At 32, his window may only be open for a few years.

How he stacks up with the best big men remains to be seen but there’s no reason to think he isn’t big enough. Standing 6’3, and with a 78-inch reach, he’s got size and should fill out fine without having to compress to 200 lbs. His boxing IQ, footwork, and punch selection should serve him well.

But will Usyk be able to box long enough to avoid a Wilder bomb?

Would the mass, pressure, and learned combinations of Ruiz undo the lighter Usyk?

Can he maneuver around the sheer size of a Joshua or outbox the longer and taller Fury?

None of those questions have answers. By the time chapter three of Usyk’s already fantastic time in the squared circle is done, surely some of them will.

[QUOTE=aboutfkntime;20113273]holee shlt, that is a big plateful right there... and a lot of... " if's " good post the two cruisers who had the most success at heavyweight were Holyfield and Haye... one was special, and one had special power...…

[QUOTE=aboutfkntime;20113273]holee shlt, that is a big plateful right there... and a lot of... " if's " good post the two cruisers who had the most success at heavyweight were Holyfield and Haye... one was special, and one had special power...…

Fury just about beat an unknown Euro bum yet the guy up there thinks he'll give Usyk problems?! Fury couldn't punch himself out of a wet paper bag. All he is good at is spoiling.

[QUOTE=aboutfkntime;20113273] The two cruisers who had the most success at heavyweight were Holyfield and Haye... one was special, and one had special power... not sure if Usyk's abilities will be as effective/influential at heavyweight as those other guys he is…