The heavyweight mix is bubbling beautifully, but it will only fizz and pop with the right fights. Legacies are made in great eras. Eras are made when fighters want to cement their legacies.

Tyson Fury, Andy Ruiz, Deontay Wilder and Anthony Joshua can all stake their claims to being the best in the world today, but only will we definitively know who rules atop of the heavyweight landscape when the smoke clears and the various permutations of mega matches have played out, provided that they do.

Oleksandr Usyk didn’t blow the doors off to the heavyweight division against Chazz Witherspoon but he didn’t need to in Chicago. He jimmied them open and set himself up for the heist.

“I’m ready to fight these guys,” Usyk said after putting Witherspoon through a slow, painful and methodical beatdown.

The American must first negotiate an October 23 rematch with Cuban veteran Luis Ortiz.

Fury, of course, has a very different ‘fight’ on his hands as he dips his toe with brand-building via the WWE with a showcase event on October 31. 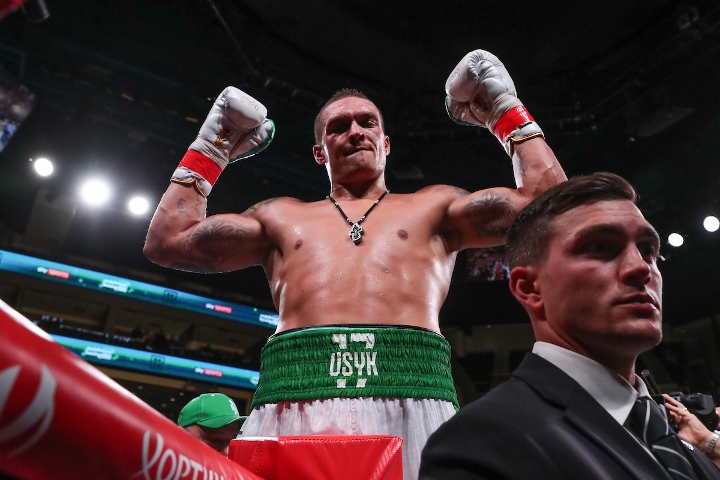 Weighing a hard 215lbs, Usyk’s first round among the big boys was purely reconnaissance. He took a long look at the fleshy veteran, landing the odd lead right while providing a constant moving target.

Usyk was balanced, poised and measured. His footwork is bordering balletic, at complete odds with the brutal way he figures opponents out and begins to concisely break them down. He mixes poetry with pain. His straight left hand is wonderfully economical and precise. It’s also cumulatively damaging. He might not lay any of the big guns out with one punch in the early rounds, but he might poleaxe a few with the shot after they’ve spent a few rounds trying to solve the puzzle in front of them.

He also drops his right shoulder, sometimes he merely feints with the movement, sometimes he will throw a lead hook with the right and at other times he will do neither but fire a left over the top. He has unusual and unique angles that make his style one that is almost impossibly hard to prepare for.

Sure, Witherspoon landed occasionally through the middle rounds but physically by that point Usyk was looking the more imposing man and he was banking some useful blows to the body. The more he sprayed Witherspoon with shots up and down the more openings became available. Usyk was gliding through his comfort zone in his first fight since November 2018. And he was doing it against a late-notice opponent who came in for original opponent Tyrone Spong during fight week. Witherspoon was having to beat a retreat through round six. There was more spite, more power, more damage in his punches in that round.

Chazz was in dire trouble. He was still game; he’s from Philadelphia where someone once said even winos know how to hook off the jab. But there was a grim resignation to his glum demeanour as he trudged forwards into the blizzard of white leather that he could no longer avoid. He was stood at the foot of a very tall mountain without the equipment to scale it.

Meanwhile, Usyk had found a vicious rhythm. His dominance only grew through round seven as Witherspoon was severely punished for each attempt he made at striking. He’d throw one and an avalanche of gloves came back in return.

It wasn’t that the resistance had been beaten out of Witherspoon, it was that he simply couldn’t come close to solving the riddle in front of him. He didn’t have any answers and he didn’t look like finding any. There was also no respite.

The impression Usyk was making on him was as much psychological as it was physical.

That was impressive from the Ukrainian, though with this sport you will get naysayers who say he breezed by someone he was expected to handle easily and should have comfortably beaten. Well, that’s job done.

Maybe some will argue it is just that, that at 17-0 it’s all just hype. But that’s the nature of the sport, there are always critics. The fun thing is finding out who is for real and who is not.

And the Usyk ride at heavyweight looks like being fun, indeed.

[QUOTE=theface07;20124691]Ever hear about legacy or daring to be great? Of course it's also about money. He's a pro boxer! He already conquered CW. There's nothing left for him to prove there. He's already successful but wants to see how good…

[QUOTE=champion4ever;20123490]This guy is boring ass s[COLOR="Black"]hi[/COLOR]t and sucks major balls. I thought his performance on Saturday night was both shameful and disgraceful.[/QUOTE] That's probably because you're a moron who knows absolutely nothing about boxing. You are a disgrace to educated,…

[QUOTE=mawoodhouse;20121899]"I’m ready to fight these guys,” Usyk said after putting Witherspoon through a slow, painful and methodical beatdown." Lol....slow? yes! painful? Ummm not so much....tiring for sure, Witherspoon ...just gassed out and that's pretty much all that happened, Usyk couldn't…

This guy is boring ass s[COLOR="Black"]hi[/COLOR]t and sucks major balls. I thought his performance on Saturday night was both shameful and disgraceful.