Okolie vs. Glowacki For Vacant WBO Title on Joshua-Pulev Undercard

Earlier this week, Hearn told BoxingScene that Joshua-Pulev is penciled in for Dec. 12 at the O2 Arena in London following a coronavirus-induced postponement from June 20 at the London’s Tottenham Hotspur Stadium in London.

Some contract points on Joshua-Pulev are in the process of being ironed out to accommodate the change from the fight being planned to take place in a 70,000-seat stadium to the much smaller O2, where Hearn hopes to have at least a limited number of spectators allowed. But the plan is to have Glowacki-Okolie as one of the chief supporting bouts on that card.

“It’s a big crossroads fight but one I believe Okolie is ready for,” said Hearn, Okolie’s promoter. “He is a huge puncher and improving all the time. I believe Britain will have a new world champion in December.” 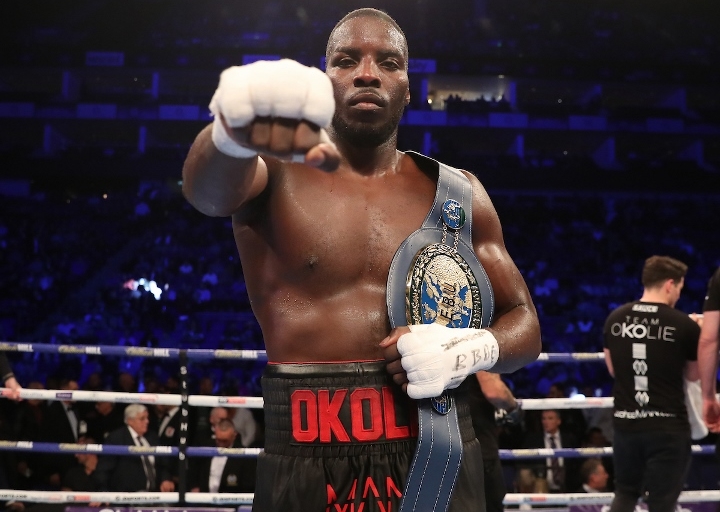 The fight will be a major step up in opposition for Okolie (14-0, 11 KOs), 27, one of England’s most highly regarded up-and-coming boxers. He has not fought since October 2019 when he knocked out Yves Ngabu in the seventh round to win the European cruiserweight title, which he has since vacated.

Okolie has boxed on major undercards previously, having defeated Ngabu on the undercard of the World Boxing Super Series junior welterweight tournament final between Josh Taylor and Regis Prograis. He also boxed on the Joshua-Alexander Povetkin undercard in September 2018 and Joshua-Carlos Takam undercard in October 2017.

The 34-year-old Glowacki (31-2, 19 KOs), of Poland, comes into the fight with far more experience than Okolie and much deeper resume.

Glowacki won the WBO cruiserweight title from long-reigning titlist Marco Huck in an all-out slugfest in August 2015 in Newark, New Jersey. Glowacki made one successful defense against former world titlist Steve Cunningham before he lost the belt to Oleksandr Usyk by unanimous decision on home turf in Poland in September 2016.

In 2018, Glowacki outpointed Maxim Vlasov for the vacant interim title in the quarterfinals of the World Boxing Super Series in Chicago. After being elevated by the WBO to the full titleholder, Glowacki was controversially knocked out by Mairis Briedis in the third round of their semifinal bout in June 2019.

The WBO ordered an immediate rematch but with Briedis contractually tied to the World Boxing Super Series, he declined to fight Glowacki again and was stripped of the title, leaving the vacant belt to be contested by Glowacki and Okolie.

Fight gonna be a boring cuddlefest as usual.

[QUOTE=BobLoblaw;20742003]I heard that Okolie has been sparring Brock Lesnar, Kane and Stone Cold Steve Austin in preparation for this.[/QUOTE] This an underrated comment!!

Lawrence 'the Octopus' Okolie by ugly UD. Kristofs 34 and coming off a loss, more importantly despite his top flight experience his basic style is tailor made for Okolie

I'd sooner teabag a bear trap in Chernobyl than watch Okolie fight again.

I heard that Okolie has been sparring Brock Lesnar, Kane and Stone Cold Steve Austin in preparation for this.