That opportunity will likely remain in play, just not against the opponent for which he’s mentally and physically prepared during that entire time.

The hunt is on for a replacement foe to challenge Okolie for the vacant World Boxing Organization (WBO) cruiserweight title, as former two-time titlist Krzystof Glowacki (31-2, 19KOs) was forced to withdraw after testing positive for COVID-19 ahead of their planned December 12 clash at SSE Arena, Wembley.

Eddie Hearn’s Matchroom Boxing, Okolie’s career-long promoter revealed the news on Thursday along with the insistence that a new opponent would be announced in due time. BoxingScene.com has learned that the matter is currently under review with the WBO, to determine the eligibility of the ultimately selected replacement foe.

"The search is on," Hearn said on Twitter. "Any top 10 cruiserweights slide into my DMs [direct messages]." 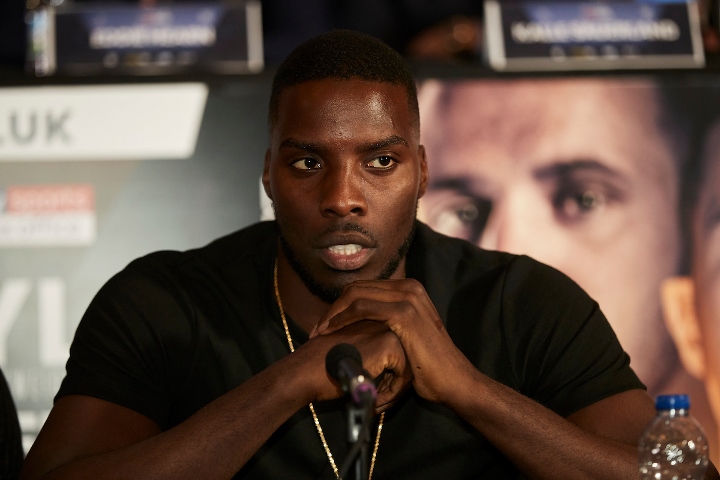 The rest of the show remains intact, including the evening’s main event. Anthony Joshua (23-1, 21KOs) returns to the ring for the first time since gaining his slew of heavyweight titles, as he defends against IBF mandatory challenger Kubrat Pulev (28-1, 14KOs). The event will take place in front of up to 1,000 spectators in attendance, all required to adhere to strict social distancing and health measures.

The test result was devastating to Glowacki for obvious health reason, though more so given his journey to this point.

Poland’s Glowacki had to twice appeal the outcome of his last fight—a controversial 3rd round knockout loss to Mairis Briedis in the semifinal round of the World Boxing Super Series (WBSS) last June in Riga, Latvia—in order to secure the opportunity to fight for his old title. The matter was finally resolved last November, with Briedis ordered to enter a rematch with Glowacki or else vacate his WBO title.

Briedis chose the latter in order to proceed with his WBSS finale versus Yuniel Dorticos, with their bout thrice postponed before finally taking place this past September. Briedis claimed a 12-round decision and top honors in the tournament, along with recognition as the lineal cruiserweight king.

Meanwhile, the vacant title was ordered to be filled with a showdown between Glowacki and Hackney’s Okolie (14-0, 11KOs) as per a ruling during the WBO’s annual convention last December in Tokyo. The two sides agreed to terms, though securing a fight date proved problematic even before the coronavirus pandemic. Among the causes was trying to find a home for a bout with which it was to be paired: Gennadiy Golovkin (40-1-1, 35KOs) in a mandatory middleweight title defense versus Kamil Szeremeta (21-0, 5KOs), Glowacki’s stablemate.

That fight will now take place December 18 in Hollywood, Florida, though with Szeremeta now without the services of Fiodor Lapin whom also tested positive for COVID-19 and can no longer make the trip.

None of it proved to be worth the wait for Glowacki, as the Polish southpaw will enter 2021 with an extensive inactive streak and now having to watch someone else fight for the title he’s held on two separate occasions.

Okolie—who represented Great Britain in the 2016 Rio Olympics—earned his place at the table following a 7th round stoppage of Yves Ngabu in their battle of unbeaten cruiserweights last October at The O2 in Greenwich, London.

As per WBO rules and regulations, protocol calls for the next available highest-ranked contender to get priority on filling such a void.

BoxingScene.com has learned that Dilan Praspvic (14-0, 11KOs) is out of the running, as the unbeaten contender from Montenegro cannot make the cruiserweight limit nearly in time for such a fight. Representatives for at least three other cruiserweights have reached out to BoxingScene.com insisting they have been offered the fight, though such details were not confirmed with Matchroom Boxing as this goes to publish.

[QUOTE=VashDBasher;20926053]Damn shame. I was really excited for this one. It had the potential to be the most exciting fight on the card. Another fight gone to ruin thanks to covid.[/QUOTE] Really? Oh yeah, Lawrence is Mr. Excitement... I was hoping…

[QUOTE=Mammoth;20926102]You know who else got offers, Jake?[/QUOTE] You tryin’ to get him killed? Okolie would starch him with ease and disfigure that money making face.

[QUOTE=Coreytrevor12;20926556]Didn't he win gold at the last Olympics?[/QUOTE] Yup. I wouldn't mind that one... not sure he's in the running and he's still kinda green in the pro ranks, but I'd say he should effing go for it if the…

Is hugging Okolie really a decent chief support for a AJ PPV card ?

[QUOTE=Mammoth;20926159]Are they ranked with the WBO? Okolie and Riakhpore would be God awful. Those guys are a couple of cuddle monsters.[/QUOTE] I like him but yeah. I cant really imagine Okolie being in a great fight with anyone but I'd…