His fight with Danny Garcia isn’t quite yet officially announced, but Errol Spence won’t catch the oddsmakers off guard once he’s ready to return to the ring. (photo by Ryan Hafey)

The unbeaten and unified welterweight titlist from Desoto, Texas has opened as a 6-1 (-600) betting favorite over Philadelphia (Pa.)-born and bred Garcia (35-2, 21KOs), who is installed as a 4-1 (+400) betting underdog according to sportsbook BetOnline.ag. The bout was strongly floated a likely next step for Spence immediately after his thrilling 12-round split decision victory over Shawn Porter.

“The closing price we had on Shawn Porter is around the price Danny Garcia should be,” Dave Mason, sportsbook brand manager for BetOnline.ag explained to BoxingScene.com of the opening odds. 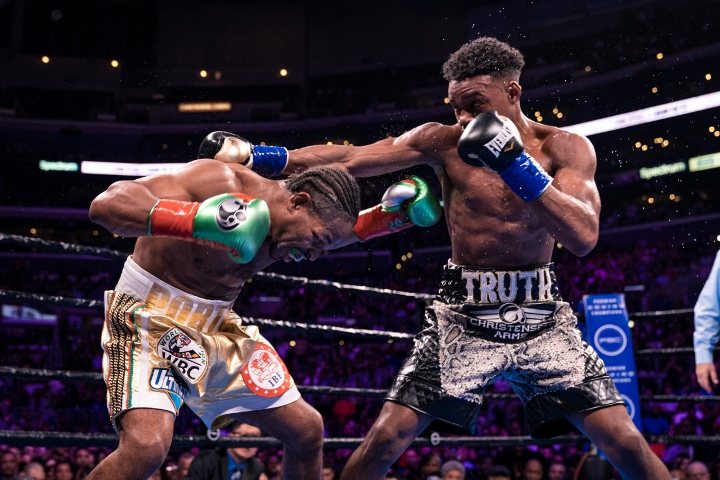 Spence (26-0, 21KOs) opened up as a whopping 10-1 favorite over Akron, Ohio’s Porter (30-3-1, 17KOs) when their title unification clash was first announced in late July. Betting odds eventually grew a little closer for their Fox Sports Pay-Per-View headliner, although most experts had Spence pegged to win.

The undefeated southpaw had to walk through hell in order to preserve his unbeaten record versus the determined two-time welterweight titlist, who began his second reign with a close but clear win over Garcia last September. Spence had predicted a knockout heading in but readily admitted that Porter was physically tougher than expected.

It was also a wakeup call for sports handicappers, especially against a tough fighter like Garcia who has never been stopped or dropped through 12 years and 37 fights as a pro.

“Porter was way too much a long shot due to Spence’s reputation, similarly like Anthony Joshua versus Andy Ruiz in their first fight,” admits Mason. “Garcia is on a similar level to Porter, having only lost to him and Keith Thurman on a split decision—I thought he won that fight, personally.”

The loss to Thurman (29-1, 22KOs) was the first for Garcia, a former two-division titlist. He’s since won two of his last three, with a narrow defeat to Porter bookended by knockout wins over Brandon Rios and Adrian Granados. Neither are enough to convince experts he stands a chance of handing Spence his first defeat when they square off, tentatively slated for the first quarter of 2020.

Still, the opening odds are as much about what Garcia brings to the table as the freshest memory that oddsmakers have of Spence.

“As for Spence, the Porter fight slightly lowered his stock and it is now seen that (unbeaten three-division and fellow reigning welterweight titlist) Terence Crawford would be a clear favorite rather than a 50/50 in their fight, should it happen.”

[QUOTE=Curtis2;20099075]If you join in the PBC WW boys club, your choices and consequences are [B]protected![/B][/QUOTE]If you're a WW, or a SWW, and you choose [B]NOT[/B] to join the PBC, your even more protected! We know where all the hitters are!…

[QUOTE=Curtis2;20099068]Underachieving past 24 rounds for your #1 Spence, Lil Mikey & Porter. I guess you're not acknowledging his weaknesses with recent 2 fights?? Undoubtedly T Crawford would KTFO of Lil Mikey & Porter, everyone thinking Spence would do, didn't happen…

[QUOTE=Bronx2245;20098755]They're not avoiding WBO Champs, they are avoiding the WBO! Have been for quite some time! Surprised you didn't know that! Andrade didn't want that work! Never fought any of the Charlos, didn't fight Lara, Williams, wasted his time! Now…