Nieves Trainer Believes You Must Be "Fearless" Against Inoue

WBO super flyweight belt-holder Naoyo Inoue comes in with a fearsome reputation as he makes his American debut on Saturday night against Antonio Nieves on HBO. Inoue is undefeated and the prohibitive favorite but Nieves and his side are undaunted, regardless.

Their belief is that the first step in beating a vaunted fighter is to not be defeated mentally coming into the ring.

"Clearly, absolutely," stated Joe Delguyd, the trainer of Nieves, "you can't be caught up in the hype of,'this guys got a great reputation' - and he's earned it but we're here to fight and if you're fighting someone you clearly must be fearless." 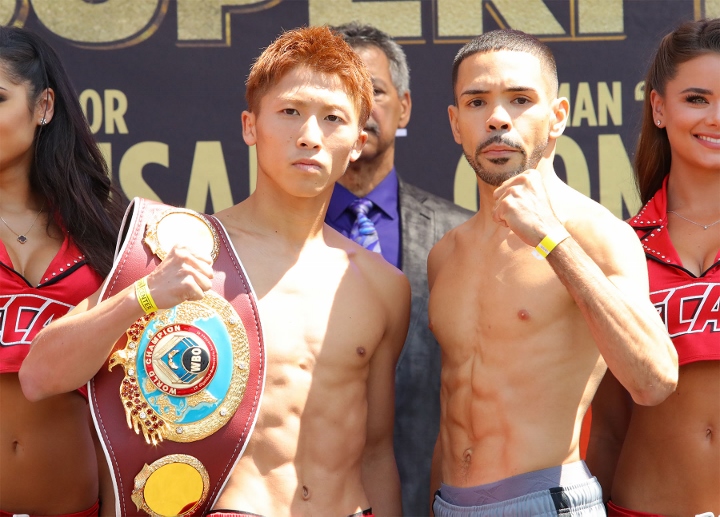 Inoue, as they say puts his pants on one leg at a time like everybody else. It's a message that Delguyd preaches, "not only throughout this camp but from the minute I start training a fighter. They're no better than you just because they've got a winning record."

So do they box or punch Inoue early on?

Delguyd chuckles and says - "I'm not really wanting to give away any game plan to be honest with you but we know the kid does well at medium and long range, he's fast, he's got a great jab, a great straight right hand and power in both hands. So clearly we're going to work our way around that."

Inoue (13-0, 11 KOs) won the WBC 108-pound title in his sixth pro fight and is already thought of as one of the world best prizefighters. Asked his thoughts upon seeing him, Delguyd stated,"I thought he was a very gifted kid, very fast very accurate, sharp puncher."

But he did note,"I would say he's fought a lot of guy that are 105-pounds, 112, and this type of thing. Now he's fighting a featherweight moving down."

It's a daunting challenge for Nieves (17-1-2, 9 KO's), who is coming off a highly disputed ten round split decision loss to Nikolai  Potapov in his last outing. But it's something that they relish.

"I was asking for him,"said Delguyd. "I was begging Tim (Van Newhouse, the manager) and I was begging Tom Loeffler (managing director of K2 Promotions) and saying over and over,'Antonio Nieves can weigh 115 pounds.'So this is something I asked for."

Not buying the hype. Dude have major stamina problems. Need to work on that and his footwork needs improving. Probably ko this dude but dont see him beating Choco. Not active enough.

The Monster is gonna eat Nieves for dinner with a little soy & wasabi.

the monster is here!!!