A 26-year-old southpaw from Fort Worth, Texas, Hernandez (9-1, 7 KOs) first came to Salita's attention last August 4, at a Salita Promotions event at the MGM Grand Detroit, and live on ShoBox: The New Generation, where he sored an impressive TKO 5 over Russia's formerly undefeated Vladimir Tikhonov (16-0). Tikhonov, a Salita fighter, was overwhelmed by the strength, heavy hands and fearsome body attack of Hernandez.

It was a display of offensive firepower that promoters look for in a prospect.

Hernandez compiled a 68-6 record as an amateur before turning pro in 2009. Hampered by inactivity for five years, due to managerial issues and a shortage of local gyms, he has rededicated his career since returning in 2014.

Hernandez comes from a boxing family and is one of 16 brothers and sisters. Nine of the boys were boxers and six turned professional, including Jose "El Loco" Hernandez, who scored a draw against former world champion Mickey Bey, and Rodrigo Hernandez, who fought to the only draw with Leo Santa Cruz.

"It's like a blessing to sign with Salita," said Hernandez. "I feel like we are very good fit. A company with great potential to make hardworking fighters into championship level athletes. I plan on making a name for myself and eventually win a world title."

A true force in the ring, Hernandez says as he progresses to bigger fights, his relentless style will become even more effective.

"I was made for 12 rounds or more. I have an advantage that will help me reach my plan of dominating the 122-lb. division and eventually move up and hopefully do the same at higher divisions. I would like to fight anybody who holds a title once I get my opportunity. I want to fight whoever is the best when I get to that level. I fear no one. If you have ranking points or a title, I hope to see you in my future."

"Jesse has an exciting, aggressive TV-friendly style," said Dmitriy Salita. "I am confident that with more fights and exposure he will be on his way to being a big name in the super bantamweight division." 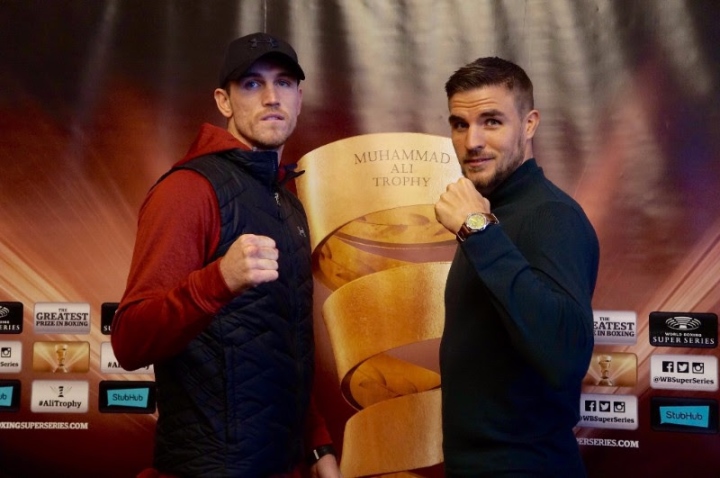 Erik Skoglund (26-0, 12 KOs) has invited countryman Zlatan Ibrahimovic to be ringside for his World Boxing Super Series quarter-final clash with Callum Smith (22-0, 17 KOs) on Saturday night at the Echo Arena in Liverpool.

‘’Zlatan is a huge star in Sweden and a big inspiration for me, proving everything is possible,’’ said Skoglund. ‘’He has shown that someone from a relatively small country like Sweden can make it all the way to the top. He has conquered the world in football, and that is what I want to do in boxing. I know my team has invited him to come to the fight, and it would be an honour to have him ringside supporting me.’’

Skoglund hopes to enjoy similar success in England on Saturday when he faces Liverpool’s undefeated hometown hero Smith for the WBC World Diamond title and a place in the World Boxing Super Series semi-final.

‘’I’m looking forward to fighting in Liverpool,’’ he said.  ‘’I’ve been fighting a lot lately in my hometown with all the pressure and expectations that come with that. In this fight, I’m the away fighter so all the pressure lies with Callum Smith and I can just concentrate on the fight and enjoy the evening.

‘’Of course, I’m confident but Callum is confident too. We’re both undefeated, we’re both hungry and that’s going to make for a great fight. On Saturday, I will fight my heart out to beat Callum and moving a step closer to the Muhammad Ali Trophy.’’

Tickets for the Smith-Skoglund Muhammad Ali Trophy quarter-final and WBC Diamond World title contest on Saturday, September 16 at the Echo Arena in Liverpool are available from £35 at EchoArena.com

Swindon will see two seasoned professional boxers fight for the prestigious Commonwealth Title next week (23rd Sept).  Neilson Boxing, in association with Sanigar Events, have managed to put together a cracking show, showcasing some of the South West’s best prospects.

Bristol’s Ashley Lane faces Michael Ramabeletsa over 12 rounds for the vacant Super-Bantamweight title in what looks like a mouth-watering 50/50 fight.  Ashley has earned himself the shot after putting together a winning streak of three wins, one of which was a point’s win over the highly touted Thomas Kindon.

Ramabeletsa himself put together a run of three wins until he faced the much fancied and undefeated Josh Kennedy for the British title in March.  Many observers had Ramabeletsa edging the close decision but it was Kennedy whose hand was raised at the final bell.

Mark Neilson said “both boxers this is a massive opportunity to get some great exposure, with the winner following in the footsteps of Gamal Yafai, Kid Galahad and Carl Frampton who have all used the Commonwealth title as a springboard for bigger things. Lane and Ramabeletsa are used to taking fights at short notice and going on the road but this time have both had full training camps with plenty of notice.  This main event has all the hallmarks of a great toe-to-toe encounter”.

Main support on the evening will be the ever entertaining, Akeem Ennis-Brown (known to his fans as Riiddy).  Riiddy, who signed to the ambitious promotional outfit MTK global earlier this year, won the English Title in his last fight against the highly experience and bookies favourite, Glen Foot.  Taking the fight in Foot’s hometown was a gamble for Riiddy but paid off when he won a majority decision against the higher ranked champion. Riiddy is scheduled to face the experienced Chris Truman over six rounds but has his eye on other titles as in the future.

Also on the packed card are Sanigar boxers Tim Cutler, Wayne Ingram and Aaron Sutton.  Chris Sanigar says, “I am very excited at the boys travelling up the M4 to box in Swindon. This should be a great night of boxing and hopefully Ashley will win the belt and be added to our list of champions. Our three prospects will gain priceless experience being on a championship fight card and will all hope that one day they too will be boxing for major honours.”

Tim Cutler who is now 7-0 is steadily moving up the rankings. His wins have all been on points; he is gaining valuable experience and is improving with each contest. Tim is a boxing technician with an accurate left jab and quick feet.

Wayne Ingram who lives in Gloucester is keen to keep the momentum going after his April win at the same venue. Wayne is now 3-0; he is always in an entertaining contest and will be bringing many vociferous fans from his hometown.

Aaron Sutton has just turned 20 making him the youngest of our team. He is now 2-0 and we are expecting a bright future for him. This will be the first time he has boxed away from home so this will be great experience for him. Aaron is a tall boxer with a textbook left jab but tends to mix it up which results into some toe-to-toe exchanges.

Tony Neilson added “an an additional bonus for Swindon’s ever-growing boxing fan base, Neilson Boxing, working with Swindon’s Horseshoe Amateur Boxing Club, open the event earlier in the afternoon with 12 amateur bouts.  Horseshoe’s best prospects will face a London Select team and include some schoolboy champions and great prospects”.

The show takes place in Swindon on Saturday September 23rd, 2017 promoted by Neilson Boxing in association with Sanigar Events.