Former WBA interim-bantamweight champion Reymart Gaballo made easy work of Colombian opponent Yeison Vargas by stopping him in the third round.

Gaballo improved his record to W22 KO19 L0 D0 while Vargas suffered his second loss and dropped his record to W17 KO12 L2. The Filipino warrior dropped Vargas once in the second stanza and twice in the third en route to the stoppage victory.

Gaballo looked relaxed and in total control from the opening bell.

“I was totally relaxed. I was sizing him up from the opening round. When I saw him getting hurt, I knew I could end it early. I was never careless. I know he is capable of a one punch game changer. But I thought he was slower than I expected. He came out much bigger after weigh-in. I want to fight the top guys at 118 pounds. I wish I could do a title fight next. I can fight anyone my management places before me. As long as I have enough time to train and be in top form, I’m on to anything," Gaballo stated.

“Raymart was superb. It was a perfect debut fight with PBC. I’m sure PBC boss Al Haymon was very impressed. We will arrange a title fight or an elimination within the year. I hope PBC can help us this fight for Gaballo. This kid has a bright future”, Manangquil said. 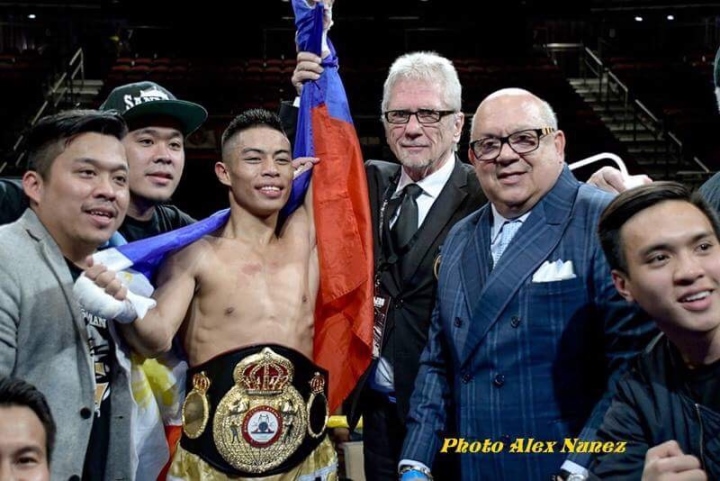 Team Sauerland’s 17-year-old sensation Sophie Alisch (4-0, 1 KO) took another step on her journey to superstardom by starring in the DFL Foundation and Deutsche Sporthilfe ‘Side by Side’ campaign alongside internationally renowned athletes including Manuel Neuer, Marco Reus and Mario Götze.

The DFL Foundation was created from Germany’s professional football teams and aims to increase integration and participation in a range of sports, regardless of background, culture or disability.

So far, the DFL Foundation has invested €21.5m to support around 550 athletes through Deutsche Sporthilfe, who between them have won 474 medals for Germany, including 63 at the Olympics and Paralympics. Sophie Alisch herself benefitted from the Deutsche Sporthilfe support for two years during her amateur career, where she won the bronze medal at the 2017 and 2018 European Championships.

“This is a really great thing and an honour to be alongside all of these first-class athletes,” said Alisch. “I think it’s great that the Bundesliga supports other sports and helps them financially, as well as growing the publics awareness.

“I myself benefited for two years from the Deutsche Sporthilfe during my amateur career so I was delighted to support the campaign. The shoot was really fun and I think the videos are really impressive!”

Alisch’s promoter Nisse Sauerland was equally delighted with the results of the shoot.

“It’s great to see Sophie alongside so many German sporting heroes,” said Sauerland. “She’s a phenomenal talent and despite being just seventeen, she is already inspiring people across Germany.”

ARCHIE SHARP will defend his WBO European super featherweight title at the Royal Albert Hall on September 27 when he takes on the challenge from Declan 'Pretty Boy' Geraghty.

'Sharpshooter' Sharp, 16-0 (8KOs), makes a second defence of the title he won from Lyon Woodstock in October of last year, having seen off the threat of game Scot Jordan McCorry last time out in July.

The Dubliner Geraghty, 19-4 (4KOs), is accustomed to being involved in thrilling encounters and took part in an absorbing double-header with recent world title challenger Jono Carroll, with the second part taking place in June of last year with the IBF Intercontinental title at stake. Victory for Carroll after nine epic rounds saw him push on towards world title contention.

Sharp believes more drama could be in the offing when he fights for the first time at the stunning South Kensington venue.

"Declan Geraghty is a good fight, a very good fight," said the 24-year-old. "He is always in exciting fights and always seems to bring a high level of skill to the ring.

"He is skilful but has ended up in a number of wars, which has probably been his downfall. He is a good, technical boxer and, because he has been chinned a couple of times, he might want to prove something now.

"If he sticks to his boxing it will be interesting because my last couple of fights have been against come-forward fighters. I like testing myself so it will be good to go in with a nice rangy southpaw. Why not?

"I am building now and every fight is benefiting me and moving me on towards those big fights. They have all been good fights - Woodstock, McCorry and now Geraghty is a good fight. They have all been hungry to win titles and if I keep beating these live opponents it will only serve to ready me for world level."

Geraghty, 29, say he won’t get pulled into war by neat boxing Sharp, but insists: “It’s a really exciting fight and will be fan-friendly for everyone watching at the Royal Albert Hall and on BT Sport.

“I am going into his backyard and there is no pressure on me. I know how good his boxing ability is and I think it is down to who has the better boxing IQ.

“I like getting involved in a fight, but not this time because it is boxer v boxer.

“Archie is a bit similar to me and likes to keep it long and rangy, but I like getting dragged into a war every so often.

“His style will suit me and now is my time to deliver.”

The ‘Steel City’ fighter will take on Thailand’s Aran Dipaen, who will arrive as an unknown quantity and could prove a ‘banana skin’ encounter for the likeable 26-year-old.  Dipean, 28, only turned pro this year but has quickly racked up a 6-1 ledger, with five of his six wins coming by KO, and already has an ‘away from home’ victory, after winning in Japan in June.

Undefeated Tommy, 11-0 (3), is currently the Commonwealth champion, blitzing Belfast’s Luke Wilton in four rounds in March to win the title, and was last out in July, beating Tanzania’s John Chuwa inside seven.  The huge Sheffield United fan will be hoping to add another belt to his collection, and could have the extra incentive of some Blades players ringside for the occasion.

Also topping the bill in a co-feature, will be Barnsley’s Josh Wale, 28-11-2 (14).  The former British Bantamweight Champion is now operating at featherweight and still in the chase for titles to cap off an already successful career.  Josh was also a winner in July, beating Tanzanian fighter Ekow Wilson in a Commonwealth Title eliminator.

“There’s some tough kids come out of Thailand, and he’s a bit of an unknown quantity,” said promoter Dennis Hobson about Frank’s opponent.  “We don’t know a lot about him, but he’s coming to win because it’s a potentially life-changing opportunity for him.  So, Tommy needs to be on top of his game.  It’s a new title opportunity, and we’re looking to build up his experience by fighting another foreigner with a different style.

“It’s a potential banana skin fight for Tommy but I believe he has the ability to cope with all sorts of styles.  If this opponent is heavy-handed, which it seems he is, then Tommy will cope with it.  At this weight division there aren’t that many kids about but we’re plotting Tommy’s path and hopefully he goes onto the world scene, but this is the type of fight that will help tell us more.

“If Tommy does win this title, then he gets ranked higher by the WBC.  We’ll see what sort of statement he makes and how that impacts on his ratings with the organisation.  We’ll then take it from there, but at some stage I’d like to have a look at Kal Yafai, if Tommy fulfils his potential, like I think he will.

“Tommy’s a true professional and he’s getting Sheffield United behind him now.  I’ve spoken to [manager] Chris Wilder and he wants to bring a few players to the next show, and he wants the fans to get behind Tommy because he’s a genuine Blades fan.  And United’s success is coinciding with Tommy’s success.

“We don’t have an opponent yet for Josh, we’re still working on it, but he should be fighting a 10-rounder.  Josh is a quality fighter and could top any bill because of his experience and style of fighting.  I love watching him and he’s never in a dull fight.  I’m looking forward to getting him a big fight.  He was in a final eliminator for the Commonwealth Title in his last fight, so that could be on the cards in the next one.  Hopefully well get him topping the bill in Barnsley soon, and winning another title, because I still think there’s a lot of mileage in him.”