King's Promotions is proud to announce the signing of United States amateur star Atid Oberlton to an exclusive promotional contract.

The 22 year-old Philadelphia was the number-two ranked light heavyweight in the United States and was a favorite to be part of the United States Olympic team, but he decided to turn his attention to the paid ranks.

"I feel like this is the best time to turn professional," said Oberlton.  "I did not want to wait for the Olympics, and with all of the politics and stuff, it was just the right time to make this move. I am ready to turn over a new leaf and become world champion."

Oberlton is excited to get going under the King's Promotions banner.

"I feel that King's Promotions is the best fit for me.  I know Marshall Kauffman thinks highly, and believes in me.  He thinks that I can become a superstar in the sport.  I want to be with people who believe in me as much as I do."

"My style is winning.  I can do everything in there.  I can be slick.  If my opponent wants a rough fight, I am down for that as well.  I can do whatever it takes to get the job done."

"This is a huge signing for us," said Marshall Kauffman, President of King's Promotions. "Atif is a major talent, and I am thrilled to be able to help develop him into a future world champion.  We look forward to getting him started, help him in his journey to become one of the top fighters in the sport."

"Atif Oberlton is one of the most gifted young light heavyweights I've seen in quite some time," said Lando Rosa, Oberlton's adviser of Pivott Boxing "He has immense physical tools, and a great work ethic. I have the utmost confidence that we're looking at a future light heavyweight champion. Pivott Boxing welcomes him with open arms. we believe Coach Shar'ron Baker and her assistant coach Markus Rosa are the perfect combination to take Atif to the top."

"Atif Oberlton is one of the top prospects in the United States right now. He has a deep amateur background that includes wins and top finishes in major national and international tournaments. He is charismatic, likeable and hard-working. His size, strength, athleticism and boxing style will make him an even more formidable professional than amateur and there is no doubt in my mind he will be a world champion in the future. I'm thrilled he will be representing Kings Promotions and can't wait for his professional debut," said King's Promotions Partner, Dr. Andrew Foy.

Ham (16-2, 6 KOs) is regarded as one of the best super-bantamweight talents domestically, having won the Scottish title back in 2017, whilst also competing for the Celtic title and WBA Continental belt in recent times.

He will now take the next steps in his career under the guidance of MTK Global, and has set his sights on adding more titles to his collection.

Ham said: "I'm very excited about joining MTK Global, they're the biggest management team around. It’s great to be involved in the same team as the likes of Tyson Fury, Carl Frampton and especially Josh Taylor, as he is my former teammate who I went to two Commonwealth Games with and travelled the world with as an amateur.

"The first thing I’d like to achieve is to get a shot at the British title this year or next, and to be involved in some great fights in the future. I would fight anyone at my weight and I’m sure with MTK I’ll get the best opportunities to do so.

"I'll hopefully be back before the end of the year, I’m currently in the gym training and awaiting a fight date, so I can't wait to return."

MTK Global Vice-President Jamie Conlan added: "We're pleased to welcome Joe to the team. He's already achieved a lot in his career and we're certain he will continue to have great success after teaming up with MTK.

"There are a number of exciting super-bantamweights now under the MTK banner, and it opens the door to potentially see some brilliant fights between them all in the future." 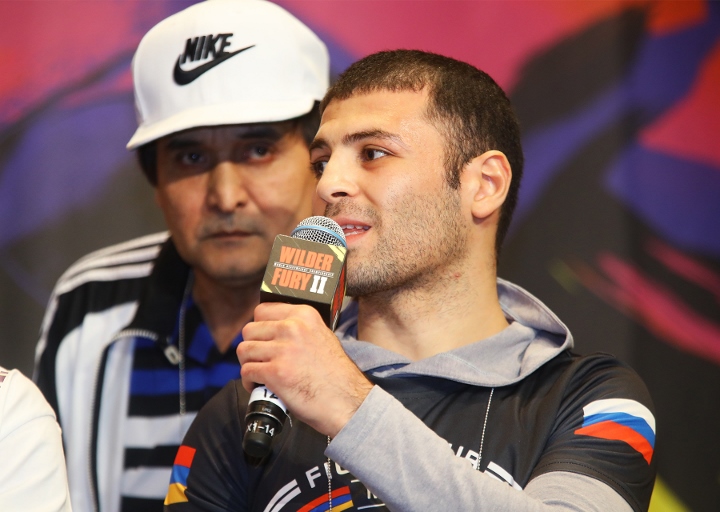 Ananyan is coming off of an impressive victory against previously unbeaten knockout artist Subriel Matias on February 22, in Las Vegas, as part of the undercard to the Wilder-Fury heavyweight championship rematch. For over six exciting rounds, the two adversaries stood shoulder-to-shoulder trading furious combinations, until Ananyan hurt and staggered Matias into the ropes for a knockdown call in the seventh frame. Ananyan dominated the remainder of the contest to earn a unanimous decision. Going into the bout, Matias was rated #2 by the IBF, #3 by the WBC, and #10 by the WBO.

Born in Armenia and raised in Russia, Ananyan began boxing at the age of 11. Over the next 15 years, he compiled an amateur record of 220-60, while winning the Moscow Championships in 2007, securing a bronze cup at the Cup of Russia Tournament in 2008, and making it to the finals of the 2014 AIBA Open Championships in China.

During that time, Ananyan also served in the military and attended University. While completing a two-year stint in the Russian Army, Ananyan competed in and won the Championship of the Armed Forces Boxing Tournament in 2010. He then earned a bachelor's degree in Physical Education from Russian State University of Physical Education, Sport, Youth and Tourism in 2013.

Ananyan, who captured the IBF International junior welterweight title in 2017, is currently training in Los Angeles, CA, but primarily lives in Russia with his wife and two children. His Russian trainer, Vely Melamed, has been in Ananyan's corner for most of his pro career.

"Lou DiBella is one of the best promoters in the world and I'm happy to team up with him," said Ananyan. "I know that, with DiBella Entertainment, I can achieve my dream of becoming a world champion. I am hungry, determined and eager to prove that I am one of the best super lightweights in the world."

"I'm thrilled to sign Petros Ananyan to DiBella Entertainment," said Lou DiBella, President of DiBella Entertainment. "Petros' win against Matias showed me that he has the talent to compete with the top contenders of the super lightweight division. I will work hard to provide Petros with the opportunities to move toward a world title shot."

"I first met Lou DiBella in Moscow at a sanctioning body's annual convention in 2003 and we've been friends ever since," said Ananyan's manager, Edouard Goumachian. "I've worked with him on many of my fighters' careers and I am excited for Ananyan's future with DiBella Entertainment's guidance."

I saw their fight, and thought that Matias, had won more rounds than Ananyan irregardless of the knock down. Ananyan did put up an incredible fight against Matias, but it didn't add up to deserving the win. Simply because he…