Boxing star Paul Fleming has already achieved plenty of success in the ring – and he’s now taken his talents to another type of canvas.

Fleming (26-0, 17 KOs) has had an extremely successful professional career, having also represented Australia at the 2008 Olympic Games in Beijing.

The 32-year-old has now returned to his Olympic roots, after he was commissioned by the AOC to put together two pieces of art for the Olympic Team.

Fleming only took up Aboriginal art a year and a half ago, and he has explained just how he was able to become involved with the art-form.

He told Olympics.com: “Initially, I didn’t have an artistic bone in my body. All throughout high school the only time I did art was when I absolutely had to and as soon as it wasn’t a required subject, I didn’t do it again.

“My role involves spending time connecting with Indigenous kids, doing a bit of dancing and learning about Aboriginal culture. But something I noticed was that a lot of the kids struggled with the confidence to dance or to speak in front of people, so I started trying to connect with them in a different way.

“We’d sit down together, and the kids would say ‘draw me something’. I’d just muck around and do some sketches for the kids, but I eventually showed them to an artist friend of mine who has designed some of my boxing uniforms and he was really impressed.

“I started to really enjoy it and it’s become something that I now do with my own kids. As a kid, I was never really exposed to Aboriginal art or culture but it’s an essential part of your identity and your story,” he explained.

“I’m glad that I get to share it with my kids who can now grow up with a sense of pride knowing exactly who they are and where they come from. I think that’s really important when it comes to building confidence.” 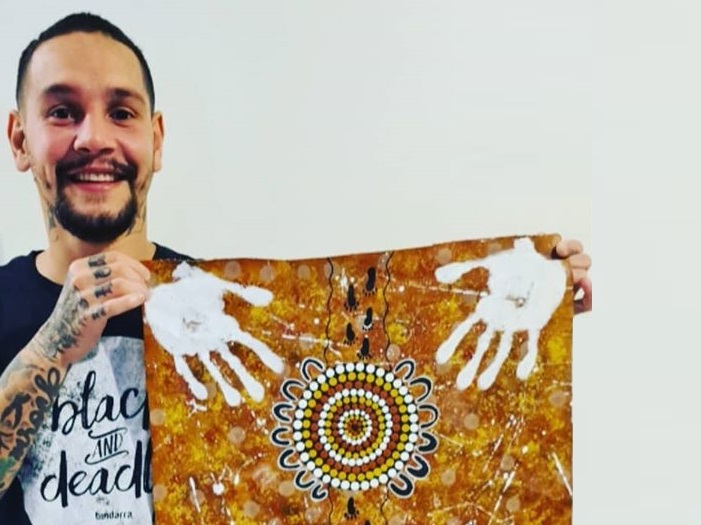 Said Peter Kahn, "I am very excited to be working with DeMichael Harris. DeMichael has the physical attributes, natural power, work ethic and mindset to be very competitive in the super featherweight division. He has a strong and hungry team behind him which is a perfect recipe for success."

Stated the 23-year-old Harris, a native of Cleveland, OH, “I would like to thank Peter Kahn for giving me a chance to showcase my skill and ability. I feel Fight Game Advisors is the right place for me and that we will definitely have a great future together. I will be a super featherweight champion sooner than I expect with Fight Game Advisors.”

Harris is trained by Mustafah Meekins, ““We are very pleased to be working with a great team at Fight Game Advisors. A place to display all of the hard work that DeMichael has been putting in. I am really looking forward to building a strong relationship as we develop and move forward through the ranks of boxing.”

Born in Cleveland, Ohio, Harris has lived in Atlanta, Georgia for the last six years. A late comer to boxing with only 17 amateur bouts, he made his foray into professional boxing after serving as a sparring partner with World Champion Gevonta ‘Tank’ Davis.

“Tank and I got along great and he suggested that I turn professional due to my style. I’ve always had more of a professional style, sitting down on my punches. I’ve heard people say I remind them of Tommy Hearns because of my height (5’11”) for the division and my power.”

“Tank put me on two of his undercards in Baltimore and Atlanta and that was a huge help to me. I fought in front of huge crowds and got to see how a true world champion prepares on fight night.”

“Peter Kahn and his team at Fight Game Advisors was a perfect fit for me, he came very highly recommended and after having these three pro bouts I knew I needed a great manager.”

“For my immediate future I want to fight as often as possible and continue to learn in the gym under Coach Mustafah. I also want to get the best sparring and we’ve already traveled to Houston, New York City, Atlanta and Florida in the past year for that.”

Vietnamese Ding Hoang Trong is growing in different areas of his career. The World Boxing Association’s (WBA) Asia Super Middleweight Champion is embarking on a new project to play the role of the villain in the movie “Dinh Mu Suong” (The Foggy Mountain).

Hoang Trong will be the counterpart of well-known actor Peter Pham. The plot involves a retired fighter who is forced back into combat by a criminal mafia but later seeks revenge. Other great martial arts athletes including Thai Simon Kook, who is one of the stars in films like Ip Man 3, will participate.

“When I was invited for a role in this film, I thought it would be easy, but it was the opposite. I found it quite difficult to act in this film because it requires a combination of many skills, not just fighting skills”, Hoang Trong told Vietnamese media.

The film began shooting in mid-2019 in several locations in the Asian country and is eagerly awaited by the fans of these types of films.

The 168-pound fighter has made history in recent years by being the first Vietnamese to win a WBA belt. He did so in October 2019 by beating Korea’s Lee Gyu Hyun to win the regional belt.

In addition, Hoang Trong, who is 30 years old, is known as the king of Vietnamese boxing since he won the national championship for 11 consecutive years and was also a gold medalist at the Southeast Asian Games in 2015.

Good to learn of boxers I never knew existed. :boxing: