As a veteran working on a winning streak to position himself for a shot at top contenders, there is little boxer Frank Galarza doesn't know about what it takes to be a champion. What is new is trying to accomplish his goals while also being the best father possible to his daughter, Joy, who will be two years old in November.

The Brooklyn based super welterweight with a record of 19 wins, two losses, two draws, and 11 knockouts is currently preparing for his next bout on Saturday, August 4 in Atlantic City on the non-televised undercard of the Kovalev vs. Alvarez fight against opponent Alex Sandro Duarte (13-5-1, 10 KOs), 38, a Brazilian boxer now based New York.

"You never underestimate an opponent. I train like every fighter is a threat. Regardless of what and who, I make sure I put in the time and the work ... Perfecting your craft, trying to get better every time. There really is no secret," said Galarza.

More than ever, Galarza has a joy and purpose thanks to his daughter, who lives up to her name. "Joy brings joy to me, happiness, a sense of peace.

"It's for her, everything I do has to be for her ... I have the motivation to work and do something no one thought I could. I have to show my little one, you can be anything. You've got to put in the time and effort, you can't be half-assed. You have to be real and genuine, you have to be out there for a purpose. It can't be for myself anymore," said Galarza.

Galarza says in the beginning of any boxer's career, he's fighting for himself. As his career progresses, he begins to fight for something outside himself, which gives his career far more meaning.

Galarza brings Joy to the gym with him daily while he's training, and he says she loves it. "It surprised me. She knows work is work, she knows training is when I am focusing. It's fun for her and it's fun for me.

"When I start throwing punches, she starts smiling. When I hit the bag, she loves it. When I watch her, and someone's shadow boxing, she sits and watches. It's amazing, she's very observant. She picks up the pads, she wants to hold pads. I don't really know what's going on in her head. But I see the smile on her face," laughs Galarza.

"Kids need our time. They need the presence of someone there. I prefer for her to be active, to be outside, trying to take her to the park, experiencing people. It's more important for me and her," said Galarza.

Galarza's natural affinity for kids motivated him to start his foundation Youth Fighting Forward in 2014 for kids of all backgrounds. Galarza saw a way to help kids who come from a background like his own without family or other support systems through boxing and mixed martial arts, along with a range of educational strategies.

Galarza says his foundation has lately shifted focus to after-school programs with an emphasis on boxing therapy to help troubled kids manage negative emotions. Galarza explains he recognized the need for such a program due to the current opioid addiction crisis.

"These kids are aggressive and need a place to work out their aggressions," said Galarza. "They are struggling in ways we didn't coming up. Boxing needs to be more therapeutic, focusing on the mental aspect. After a boxing workout, you feel release. Take a kid dealing with some kind of trauma, whatever frustration you feel today, release it into the bag. Now breathe, focus, and release the energy, transfer it to the bag and you don't have to take it.

Galarza may be a devoted father and mentor, but some things never change. "We don't get paid by the hour!" said Galarza. "I'll try to put on a show, entertain the crowd, and get Duarte out of there as quick as possible. You got to see the boxing style Frank, with jabs, footwork and movement. Now the old Frank Notorious is coming back!" promises Galarza.

He is especially excited about fighting in the brand new venue's Etess Arena. "Having the new Hard Rock in Atlantic City, it will start to grow and build back to what it was before, with the greats there like Arturo Gatti. Let's go back to that time." 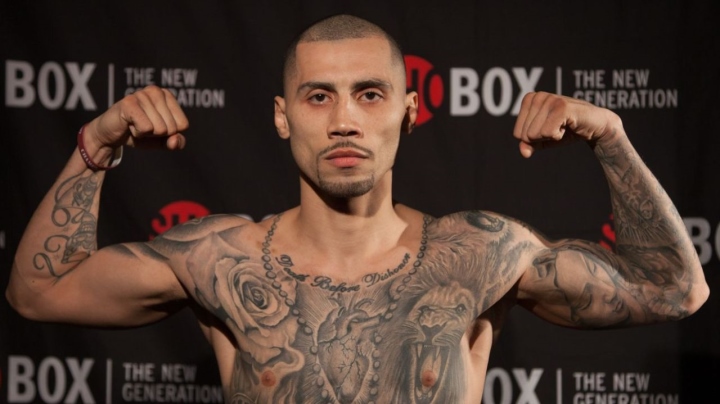 This Friday night at the WinnaVegas Casino Resort in Sloan, Iowa, 2018 National Golden Gloves champion, heavyweight Roney Hines will make his pro debut when he takes on David Becker in a four-round bout that will precede a ShoBox: The New Generation tripleheader.

Hines, 23 years-old, of Cleveland, Ohio won the National Golden Gloves in May in Omaha, Nebraska, which is just an 90 minute drive from Sloan, Iowa.

"I am ready to get this out of the way, and put my name on the map.  I want to show people what I have," said Hines.

Hines, who describes himself as a boxer-puncher, has the physical attributes of the modern day heavyweight by standing almost 6-foot-7 and weighing close to 240 pounds.

Hines, who recently signed with GH3 Promotions explained he is with the New Jersey based promotion due to past success moving young fighters along.

"I am very comfortable with GH3.  With Vito Mielnicki, it's a family type of atmosphere. I plan to fight every month if I can.  Whenever Vito says he can get me in the ring, then I will fight.  I just want to take this 1 step at a time.  I know what I bring as a fighter, and I am looking forward to showing my skills."

In Becker, Hines is facing an opponent who is 1-1 with 1 knockout from St. Joseph, Missouri.

"I do not know anything about him.  He just needs to know who I am, and if he doesn't, I will show him on Friday."

"I am going to work hard, and take this one step at a time.  I will be a factor in the heavyweight division before too long."

Hines is promoted by GH3 Promotions and is co-managed by Chances Aurelius and former NFL star Ray Edwards.  Hines is trained by Push Davis.

Mielnicki said, "I am looking for Roney to have around 15 fights before the end of 2019."

Following a successful weekend that saw DiBella Entertainment (DBE) spanning the globe with four impressive victories between junior welterweight star Regis Prograis and US Olympian Charles Conwell in New Orleans, female boxing sensation Raquel Miller in San Francisco and lightweight contender George Kambosos Jr. in Kuala Lumpur, DBE is on the road again bringing the Broadway Boxing series back to its home away from home at the beautiful Foxwoods Resort Casino, in Mashantucket, CT, this Saturday. Headlining the event will be East Hartford, CT's "Marvelous" Mykquan Williams (11-0, 7 KOs) facing Matt "The Mantis" Doherty (8-4-1, 4 KOs), of Salem, MA, in an eight-round junior welterweight bout.

Only 20 years old, the all-action Williams has become a featured fighter at Foxwoods Resort Casino, with nine previous starts on-site. Managed by Jackie Kallen and trained by Paul Cichon, Williams has started his 2018 campaign in destructive fashion with two first-round knockouts, most recently stopping Orlando Felix on May 5, at Foxwoods. The 29-year-old Doherty looks for a return to victory after his four-bout winning streak was stopped in a six-round clash against highly regarded undefeated prospect Ray Moylette on March 31, in Quincy, MA.

Tickets for the stacked card, presented by Nissan of Queens, Azad Watches, OPTYX, Christos Steak House and Gagliardi Insurance, are priced at $125, $75 and $45, and can be purchased online at Foxwoods.com, Ticketmaster.com, by calling 800-200-2882, or visiting the Foxwoods box office. Foxwoods Resort Casino is located at 350 Trolley Line Boulevard, Mashantucket, Connecticut 06338. Doors will open to the Fox Theater at 6:30 p.m., with the first fight scheduled for 7:00 p.m.

The show will be broadcast on LIVE.DBE1.COM, part of the SportsLive OTT service as part of a partnership with CBS Sports Digital. Fans can subscribe to the event for $6.95 now by visiting LIVE.DBE1.COM.

Featured in an eight-round women's featherweight contest, Providence, RI, fan favorite Shelly "Shelito's Way" Vincent (22-1, 1 KO) battles hard-hitting Colombian Calixta Silgado (16-9-3, 11 KOs), in a rematch of their memorable clash last year, won by Vincent over eight rounds. Including the win versus Silgado, Vincent is currently riding a four-bout winning streak, started after her history-making nationally televised battle with world ranked Heather Hardy on August 21, 2016, the only loss on her ledger.

Popular fast-rising welterweight prospect Adrian Sosa (7-0, 5 KOs), of Lawrence, MA, will compete in a scheduled six-rounder. The 23-year-old Sosa returns to action following his best win in the paid ranks, a six-round decision against fellow undefeated prospect Khiry Todd on May 5, at Foxwoods Resort Casino. Sosa was a 2014 New England Golden Gloves champion and turned pro in July 2016 following an 18-2 amateur career.

Newcomer Lamont Powell (1-0), of Pawtucket, RI, will compete in a four-round middleweight bout against Charles Carroll (0-1), of The Bronx, NY. The 25-year-old Powell made his triumphant pro debut on May 5, with a shutout four-round decision against Amadeu Cristiano.

Co-promoted by DiBella Entertainment and Fight Promotions Inc., Uzbek heavyweight Bakhodir Jalolov (1-0, 1 KO) will return to the scene of his pro debut in a six-round bout. Born in Sariosiyo, Uzbekistan, Jalolov was a highly accomplished amateur, compiling a record of 84-13. A four-time National champion from 2013 to 2016, Jalolov represented his homeland at the 2016 Olympic Games in Rio de Janiero, Brazil, and had the distinguished honor of being the country's flagbearer at the Opening Ceremonies. As an amateur, Jalolov won gold medals at the Asian Amateur Boxing Championships in 2017, World Cup Tournament, Liventsev Memorial Tournament, Great Silk Way Tournament, and Duisenkul Shopokov Memorial Tournament in 2015, and at the World Cup of Petroleum Countries Tournament in 2014. During his amateur career, Jalolov also focused on his education, earning a Master's Degree in Sports Science. He now trains in Miami, FL, with the renowned Pedro Diaz and Ravshan Khodjaev.