If not for a critical decision four years ago, 21-year-old "Marvelous" Mykquan Williams could very well be elite amateur training to compete for a spot on the 2020 USA Boxing Olympic Team, rather than the 15-0 rising star that he is today in professional boxing.

Williams (15-0, 7 KOs), who lives in East Hartford (CT), has overcome life-altering obstacles in which his father was murdered when Mykquan was only eight months old, and the family house burned to the ground when he was 10.

Ineligible to compete for a roster spot on the 2016 USA Boxing Olympic Team because he was too young, Williams had two choices: remain an amateur for four years without any guarantees of qualifying for the Olympics, or get a jump start on his professional career. He chose the latter route and hasn't looked back.

Williams was a decorated amateur whose style, in retrospect, is much better suited for pro boxing than the amateurs. He had a 45-13 amateur record, highlighted by three gold-medal performances at the Ringside World Championships, in addition to capturing top honors at the National PAL and National Silver Glove championships.

"I was too young for the last one," Williams explained his decision to turn pro when he did." Williams explained. I ended my amateur career after there were scoring changes. I lost some tough decisions. I decided to take the next step and go pro to get paid. My style was more suitable for the pros. I don't throw 100 punches a round; I pick my spots when I have openings.

"I didn't want to wait several years. I chose to turn pro (when he was a senior at Prince Tech). I'm already 15-0, climbing the rankings, and I'm getting paid to do this. I was meant to do this."

"I believed that Mykey was ready to turn pro," Kallen commented. "Under Paul's tutelage he was far enough advanced and eager to tackle the pros. His style was perfectly suited for the pros and at 18 years old he was ready to take the leap. His youthful good looks made him an ideal young prospect."

My concern at that time was the Olympic Team was no sure thing," added Cichon, who has trained Williams for the past 10 years. I had the confidence in Mykey, but the risk wasn't worth the gain. We decided to go pro."

Four years later, instead of competing against America's elite amateur boxers in his weight class - Keyshawn Davis, Bruce Carrington and Dalis Kaleiopu -- at the 2020 Olympic Trials and USA Boxing's National Championships, December 7-15, in Lake Charles, Louisiana, Williams is one of the top 21-and-under prospects in boxing. 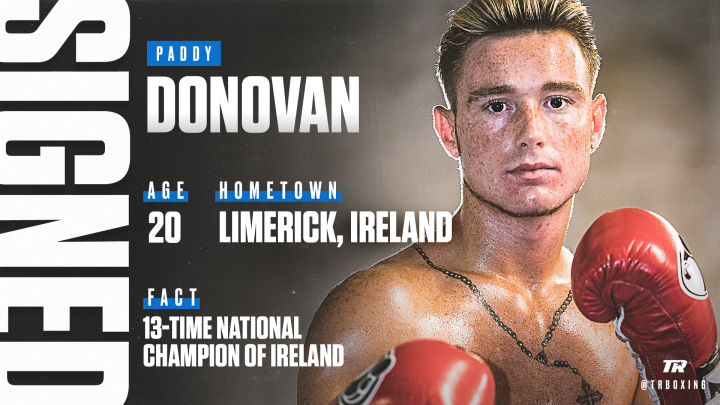 The Limerick welterweight is trained and managed by former world champion Andy Lee and will take his bow on the #MTKFightNight, live on ESPN+ in the United States in association with Top Rank and on iFL TV worldwide.

Donovan said: “Thank you to Top Rank and MTK for working together to allow me to fight on this card.

“The Ulster Hall is an iconic boxing venue and I’m excited to be making my debut there in front of the Belfast crowd.

“My goal is to be a world champion and there’s no better place than Belfast to start this journey.”

Lee added: “Paddy is an exceptional talent. He has all the ingredients to become a world champion. It’s exciting to work with him and help him fulfill his dream.

“Thanks to Top Rank and MTK for having us as part of this great show.”

MTK Global Professional Development Coordinator said: “This is great news. To have another top talent like Paddy making his debut on this show is a treat for fans.

“Whether you’re one of the lucky ones who is there in person or watching anywhere around the world, don’t miss this. It’s going to be special and it’s part of an excellent bill.”

Through trials and tribulations both fighters have earned their way onto the September 20 card at The Paramount. Junior Almonte, was an outstanding amateur and shows great promise for the Bantamweight division.  As an amateur he had a record for 92 wins and 8 defeats with 4 victories over highly respected Olympians.  Almonte is world ranked by WBC (#24) .  In Almonte's most recent bout against ANGELO "EL OLIMPICO" MUNOZ, Almonte showcased his power with a first-round TKO. Almonte is proving to be a knockout machine who is prepared to take the world of boxing by storm, starting with his United States debut.  On September 20th, Almonte for the first time in his young and bright career will fight on American soil at The Paramount and will be looking to finish Garza like he finished his previous six of seven opponents.

Almonte had this to say about the great opportunity that is ahead of him, "The first phase of my training was in the Dominican Republic, and the second phase has been in the US and everything is going well. I am going to do my best to Impress the American fans and I am thankful to be on American soil defending my title. God willing, there will be greater things ahead. I want to do a good job and show that there is talent in the Dominican Republic, and I am just very happy for this opportunity."

However, standing in Almonte's way is, Ernesto Garza III, who is more than ready for his shot at the WBC FECARBOX Bantamweight title.  Garza's pedigree and experience actually exceeds that of Almonte.  As an amateur, Garza holds many National titles including the 2008  national Golden Gloves title at 119 pounds. He finished third in 2009, then fought at 125 pounds in the U.S. National Championships, also finishing third.  As a pro, Garza has taken on top prospects Including several bouts on Showtime.  Garza has fought at weights over 130 lbs, seeking money and opportunity but is now fighting Almonte as his natural 118 lbs division.   In his latest fight Garza dominated JENO TONTE by TKO in round 1.  Garza knows a lot is on the line for him as well, and a win over undefeated  Almonte on September 20, will skyrocket him up the world rankings in the bantamweight division.

Garza had this to say about his co-feature bout on September 20, "First off I would have to thank my Lord and Savior and Jesus Christ for blessing me with this big opportunity and victory and Split-T-Management Davud McWater and Joe Quiambao  for making this fight happen. This will be just the beginning from me and it feels great to win a title that would put me in the ranking of the WBC. The fans can expect the best out of me to give it my all in the ring. I'll give the fans what they want to see. I'll be the one forcing the fight. He's never fought anybody like me before, my resume speaks for itself. It's gonna be a fight and the fans can expect me to come out on top."

These hard punching bantamweights come from different parts of the world, but on September 20th  they will meet at The Paramount for what promises to be a thrilling fight. For Junior it's an opportunity that will open doors for him in the United States. For Garza, it's a shot to prove he the heralded prospect that he was considered when he came out of the US amateur program at 118 lbs.  This will be a promising fight and will leave little room for imagination.

CEO of Star Boxing, JOE DEGUARDIA, had this to say about the bout, "We are very excited to bring Junior Almonte to the United States against one of the toughest possible guys out there.  Almonte has dominated in the Dominican Republic, and he has his WBC FECARBOX Title to show for it.  But Garza is a special fighter himself.  This is an eagerly anticipated fights by 'those in the know' as Garza is a very experienced and tough known quality fighter.  I expect a thrilling fight for the fans at The Paramount come September 20."