Jones of Detroit, has a record of 6-0 with three knockouts.

Jones, who was mentored by longtime and respected Detroit boxing man, Carlos Llinas, possesses a fan-friendly style, as he likes to apply  relentless pressure to his opponent.

His strengths are his natural instincts, and physical strength.  Jones is a fearless fighter who likes to mix it up with his opponent.

"I am very excited to sign with Split-T Management because this is a big opportunity for me to get to the next level of boxing," Said Jones. " Everyone will  love seeing me fight because I'm all action.  My boxing idol is Marvelous Marvin Hagler and I have adopted his motto " Seek and Destroy!"  My style is to impose my strength and will on an opponent, inflict as much pain as possible so they realize there is nothing they can do to beat me".

Said Carlos Llinas, "I have been following Isiah's career since he was an amateur winning two Detroit Golden Gloves Championships. Detroit is going to see a fighter that will remind you of the Michigan greats of yesteryear." 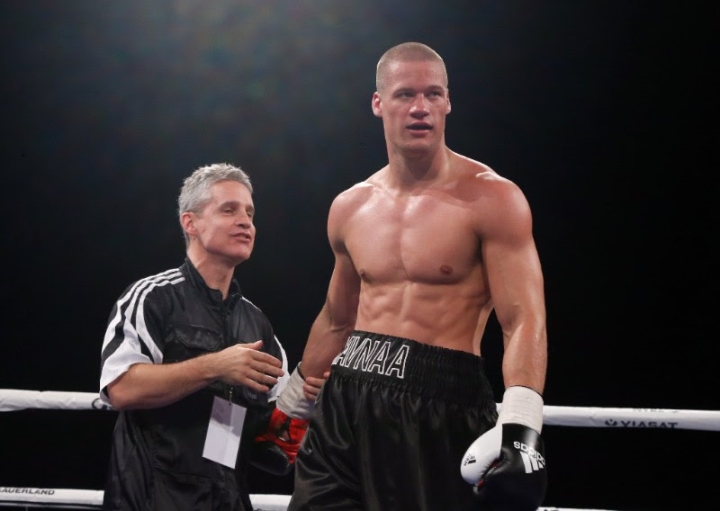 Kai Robin Havnaa (12-0, 10 KOs) will face Frank Bluemle (15-5-2, 10 KOs) on Saturday, April 28 at the Baden Arena in Offenburg as the Norwegian cruiserweight talent targets a hometown title fight after the summer break.

Havnaa returns to the ring following his fight with Daniel Vencl on February 3 at the SØR Amfi in Arendal, where the 29 year-old impressed on his hometown debut scoring a second-round stoppage victory against his Czech opponent.

Havnaa, the son of Norway’s only ever male World Champion Magne Havnaa, has also seen his stock rise with a starring role in the six-part reality television series ‘Team Havnaa’ documenting his rise through the ranks broadcast on TV3 in his native Norway.

Havnaa intends to build on this success by defeating Bluemle in Germany to set up another big event in Arendal featuring a title fight for the hometown hero.

“There was a lot of pressure building up to the fight," he says. "It was my first time boxing at home and my first time fighting as the main event. You never know how you’re going to deal with the pressure until you’re in the ring face-to-face with your opponent, but I handled it well, and I think that proves the big stage is where I belong.”

Before Havnaa can consider returning to the SØR Amfi, he must first overcome Bluemle, the 33 year-old from Neumuenster, who will look to thwart the Norwegian's title ambitions.

"Bluemle is a good fighter," said Havnaa. "No doubt about it. I'm coming to his country and to his home so this is going to be good challenge for me and another step up on my way to the top. It's a fight I need to win to prove I deserve a title fight in my hometown.

“My dream is to fight for a title at home in my next match. I’ve spoken to my promoter Nisse Sauerland, and I know it can happen so that's given me even more motivation to work hard, improve and to win my fight on Saturday in Offenburg.”

Promoter Nisse Sauerland reveals a hometown title fight is an option for Havnaa after the summer. "We had a fantastic event at the SØR Amfi in February, and we would like to go back with an even bigger and better event after the summer," he says. "That means a tougher test for Kai and a title on the line. He must first get past Bluemle and then we can start planning for another big fight night in Arendal, and Kai's first title challenge!"

Havnaa’s fight will be shown live and exclusive on Viasport + in Norway.

Leeds puncher Reece Cartwright looks to launch himself into the talent packed middleweight division with a devastating display when he features at the Macron Stadium, Premier Suite, Bolton on Saturday 12th May, exclusively live on Channel 5.

The 23-year-old from Halton holds the IBF World Youth crown and hopes to receive confirmation shortly that he will defend the belt on the undercard of Hughie Fury’s British Heavyweight Title Challenge against Sam Sexton.

He won the title last May when he stopped the previously unbeaten Jan Meiser with a sensational fourth round stoppage.  He suffered a shock first round loss to Rafael Chiruta in his next fight, but has bounced back with three solid wins since.

Cartwright’s big-punching, all-action, style has attracted a strong local following and now with crucial live exposure across the UK on free-to-air TV Channel 5, he believes it will make him a big star.

“This is a fantastic opportunity for me and my career and I can’t wait,” Said Cartwright.

“Thanks to Mick Hennessy for getting me a slot on the show and with it being televised live on terrestrial TV on Channel 5 it a massive, massive, opportunity for me to showcase my skills across the nation and make everyone sit up and take notice,”

“I’m exciting, I like to have a fight, my fans know what they get when they come to see me in action and go home satisfied, nows it’s about making my name known across the land,”

“It’s hard a business and especially to get TV exposure so when an opportunity like this presents itself you have to grab it with both hands, who knows what will come from it, so I’ve got to put on another good performance on 12th May.”

Cartwright is independently ranked at #14 in the 160-pound domestic rankings and is closing in on the top ten with top operators Billy Joe Saunders and Martin Murray heading the pack.  On the world scene the great Gennady Golovkin and Saul Alavarez lead the way with quality fighters Jermall Charlo and Daniel Jacobs also in the mix.

Whilst he know’s that he’s a long way from facing those names, he’s aware that’s the level he wants to be at in the future and knows he needs to keep winning.

He added, “It’s an exciting time in the middleweight division here and in the US with plenty of elite names and stars in the weight class.  I love watching class fighters like Golovkin and who knows what will happen in the future, I’m setting my sights high and one day I’ll get there, but for now I need to make sure I win at the Macron Stadium."