Djeko is coming off of a dominate TKO performance over Tamas Kozma in his hometown of Belgium in September. Ahead of the May 12th tilt, Djeko went abroad to train in Cypress at the famous Touch Glove Gym. As a highly regarded prospect in the Cruiserweight division, Djeko knows that a victory on May 12th will not only win him a title, but will be the next step towards the ultimate goal of fighting for a world title.

Djeko will look to use his massive frame, and quick feet to cut the ring off to attack Gudino.  With seven KO's in twelve wins, Djeko will certainly bring the power to the Versluys Dôme, on May 12th. 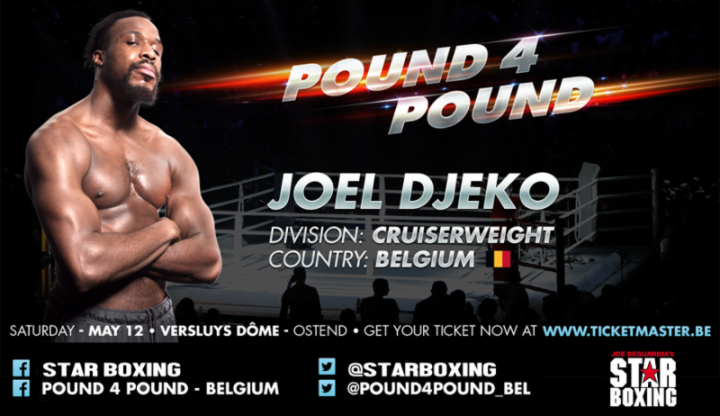 Djeko had this to say about his upcoming bout, "It is an important date because a victory would bring me closer to my ultimate goal, which is a world chance. He is a high level opponent but I advise the public to be on time because I intend to solve the problem very quickly."

The undefeated, thirty year old, Gudino, is currently ranked 39th by the WBC, holds the WBC Latino Cruiserweight Title and will be fighting in Belgium for the first time. This bout will have no shortage of power as Gudino has knocked out more then half of his opposition during his undefeated streak. As his first bout outside of Argentina, Gudino looks to use a victory to increase his global appeal.

Gudino had these comments about May 12th, "Joel Djeko is a very good boxer. Despite his height, he is very fast and very mobile. I think it will be a very intense fight that should please the public. He must know that I am ready for war and that I intend to add this title to my record."

YASSINE MAATALA, Djeko's manager had this to say about Djeko's opportunity, "We know that the task will be tough in front of us because we have a very well ranked opponent who is undefeated and holds a WBC title. We also know that a victory would give us a lot of opportunities and we are doing our best to keep the belt at home."

President of Star Boxing, JOE DEGUARDIA had this to say, "We are excited about Djeko's upcoming bout, and the future of his career. A win on May 12th is another stepping stone to the ultimate goal of fighting for a cruiserweight world title. I expect a very exciting fight and congratulate both fighters. It's refreshing to see two highly regarded prospects put their great records on the line. It is a testament to their desire to get to the top."

Philadelphia, PA - Friday night in his hometown of Philadelphia, top welterweight prospect Poindexter Knight improved to 3-0-0, 2 knockouts, with a dominating four round decision over cross-town rival Vincent Floyd at the 2300 Arena.

Aggressive from the opening bell the 22-year-old southpaw dropped Floyd in the first round and stayed in control displaying a full arsenal throughout the fight in front of a huge crowd of his local supporters. Scores at the end of the four stanzas were 40-35 on all three judges’ scorecards.

Promoted by The Real Deal Boxing, Knight continued to impress Evander Holyfield, “This was the third time I’ve see Poindexter and he has improved with each outing. He’s young but it’s obvious he’s working hard in training and it’s paying dividends.”

Details on Knight’s return to action will be announced in the near future.

THE BRITISH Lionhearts maintained their good run of form in this season’s World Series of Boxing (WSB) with a comprehensive 4-1 win over the Croatian Knights last night (Friday 6 April) in Zagreb.

A defeat for overseas selection, Florin Laurentiu Balteanu, who lost to Nodari Darbaidze in the opening bout in Zagreb, gave the Lionheart’s fuel to push on in the contest, ending the evening with a comfortable 4-1 victory.

“In the second bout, Niall Farrell brought the teams level up with a really good boxing display, controlling the contest and got the unanimous win against Filip Poturovic.

“Up next was Dalton Smith, who has been out of action for a while due to injury. Dalton put on a tremendous performance, boxing his way to a unanimous win over Ivan Njegac.

“Jordan Reynolds made his debut for the team, he was looking good for the victory when the contest was stopped in the fifth round, giving the Lionhearts a 3-1 lead.

“The experienced Radoslav Pantaleev was in very good form and collected the final win of the evening. Overall it was a great night for the team and a good performance from all boxers involved.”

Next-up the British team face the France Fighting Roosters for a showdown in Newport on Saturday 14 April 2018 to decide who finishes the regular season as winner of the European Group.