Gearoid Clancy has a two-tier plan ahead of an Australian title clash with Steve Spark in Toowoomba on Saturday.

The Irish-born 33-year-old won the New South Wales State crown last time out and plans to add the national belt to his collection before heading back to his native country with yet another goal in mind.

“I think I’m improving every fight. Certainly, in the last two, I’ve got better because I moved to super-lightweight and am therefore feeling a lot stronger. There’s a lot better to come from me now.

“There’s no denying Steve is a step up from my last opponent but he won’t be bringing anything I haven’t seen before. He’ll come out and rush at me looking for the knockout. That’s when we’ll catch him.

“He makes mistakes when he plays to the crowd and he’s at home in this title fight so he’ll play to the crowd again. He tries to impress his fans and that’s when I’ll be catching him.

“I certainly don’t plan on letting him bully me. I won’t be retreating on the back foot. I’ll meet fire with fire but while I’m doing that, I plan to outsmart him.” 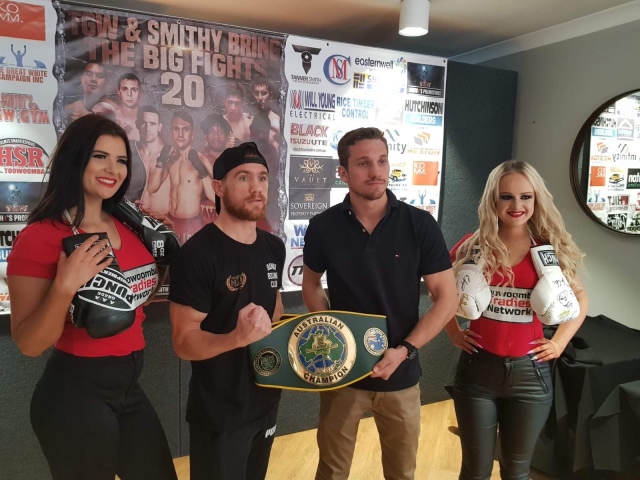 BoxRec has Mimoune rated as the 4th best fighter in the world giving wins over names like Sam Eggington and other undefeated contenders.

Mimoune, originally hailing from Senegal and Algeria but calling Toulouse in France his home is excited to join forces with MTK Global.

He said: “I have heard a lot about MTK Global and I’m sure they will help me bring my career to the next level. I want to unify the belts and fight the big names in my division like Adrian Broner. I feel that I can outbox anyone who is being put in front of me and I will prove it.”

MTK Global’s CEO Sandra Vaughan welcomes Mimoune to the ever growing stable of MTK Global talent: “Mohamed is well positioned at an interesting weight and we are sure that he is on the way to becoming a household name of boxing not just in France but internationally as well.”

MTK Global’s Head of Business Development Dr. Mirko Wolf says: “Mohamed is the kind of fighter who will not KO you but has the skills to outslick you on top of a pinhead. We foresee some very interesting fights for him in the future and are excited to start working with him.”

At the age of just 20, Tapia (7-0-KO4) clashes with the also-unbeaten Isaac Buckley for the New South Wales State super-middleweight title on Friday night (5-0-1-KO1).

Despite his tender years, Tapia is not only maintaining discipline amid increasing fame but able to assess the development of his mindset when it comes to temptation.

Tapia said: “I went through the drinking and partying stage really young. I’ve got a girlfriend now and she’s a very good woman. She helps out a lot and understands what it takes to be a successful professional boxer so I’m very grateful for that one.

“Throughout my amateur days I was partying a lot and I didn’t use to take it too seriously because a few decisions didn’t go my way.

“I know what’s wrong and right now. I’ve been through things and these days I focus on living a balanced lifestyle.

“It’s a bit crazy to think I’m fighting for State honours at the age of just 20. If I’m honest, I didn’t think I’d come this far this quickly but when the opportunity presented itself, we took it with both hands.

“I believe I’m up there with Australia’s best prospects. There are a lot of up-and-coming fighters in the country in the same boat as me and we all share the same goal – to become world champion.

“Friday night will be a great fight. Isaac is a tremendous athlete with a lot of heart. I’ve met him outside the ring a few times but it’s all business on Friday night. That’s how I handle things – I don’t respect anyone who’s in front of me trying to take away my dream.”

Promising bantamweight Sean McGoldrick has big plans to reward his loyal fans when he fights at Cardiff’s Ice Arena Wales on Saturday.

The Welshman is a former Commonwealth Games champion and having gone through the frustration of pay-per-view scheduling problems denying him a chance to fight on home soil once already, now has his homecoming.

McGoldrick (6-0-KO2) said: “Finally, I’m getting to fight in Wales! I’m absolutely buzzing to be boxing back home for the first time as a pro.

“I’m obviously excited but I’m even more pleased for all the people who came to watch me last time and didn’t get to. Some people have travelled all over to watch me and it means a lot.

“This time, those same people who’ve made such an effort can just pop down the road to see me rather than it being a whole day trip involving trains and buses. I’m delighted I’ll get to perform for them.

“I wouldn’t say it’s pressure to have all these people wishing you well but I definitely want to perform well and put on a good show for them. If someone is spending time and money to be part of my journey, I want to pay them back and the only way I can is by performing.

“Whenever you box locally, the temptation is to get carried away with the atmosphere and go trigger-happy, but I’ll stick to my boxing because I’m mentally prepared for it and my team will help me stay focused.”

The Londoner (7-0-KO4), who was a standout amateur before turning professional, is trained by the world-renowned Adam Booth and is a gym-mate and sparring partner of Michael Conlan.

Reid said: “I beat everyone in the amateurs and hopefully joining MTK Global will mean that I’m much more active now.

“Turning professional has been hard so far but I know I’m going to make it work. Punching people in the face for a living is what I love and joining MTK Global is going to help my career, my mindset and everything else.

“I’ll have a few warm-up fights and then I want to go straight for the British title. I need a few rounds because I’ve been out of the ring for nine months but there’s no point in looking at the Southern Area or the English titles.

“I couldn’t care less about who I fight. I spar Ryan Burnett and Michael Conlan so I’ve got the best people around to push me on. Having fighters like those two around who are so successful helps merealise boxing can provide what I want.

“Adam Booth is the best trainer I’ve ever worked with and I’ve trained and sparred everyone. Nobody has taught me like he has. He’s got the movement himself – he does it and we have to imitate.

“Longer term, to make more money you need to step up and fight bigger people. I want to titles at super-bantamweight and then once I’m established, I’ll move up inweight division.”

Mimoune is not the welterweight EBU champion anymore. He gave up the title to avoid fighting the current EBU champion, the Basque Kerman Lejarraga who beat Bradley Skeete in April this year.

Didn´t even read but.. Gearoid? He better do full VADA. :rofl: