For the first three rounds, Correa applied a ton of pressure upon Garcia with a strategic body attack, that saw Garcia on the ropes having to take cover. In the fourth round, Correa landed a deadly lead right hand that sent Garcia to the canvas, as Garcia opted not to continue. With the win, Correa is that much closer to be in position for a world title shot. Correa is currently a promotional free agent, looking to sign with the right promoter.  Four televised bouts are the goal for 2020.

"I wanted to make a statement and I feel I did," said Eros Correa. "I am as active as I have ever been in my career and very grateful to be in this position. I will keep working hard and know a tremendous opportunity will come soon. My managers are doing a great job guiding my career and I'm thankful. I’m hoping to be back in the ring by late February or March."

“We are one step closer to landing a big fight,” said Andrew Bocanegra, CEO of Cali Boxing Management. “Now that Eros has double digit wins, he’s in better position to be in a major step up fight. We are talking to a few folks about getting him a four-fight deal on television.  2020 will be a breakout year for Eros.” 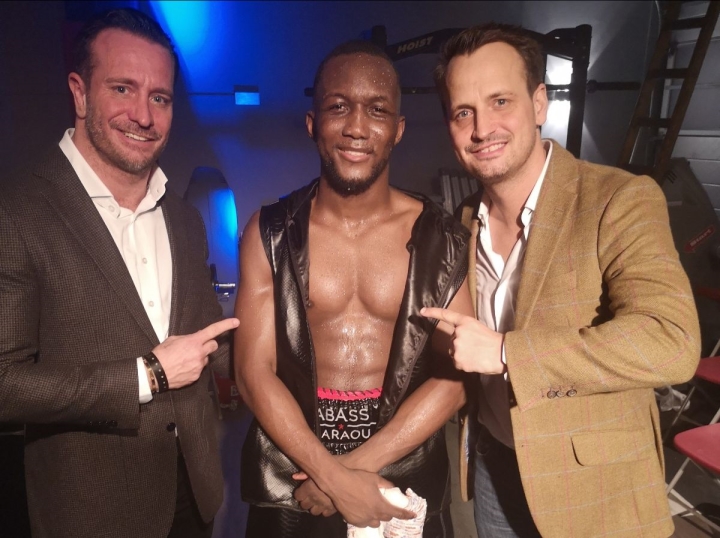 The historic evening saw Germany’s oldest promoters Team Sauerland and Universum co-promote a show for the first time in history, and Baraou, the headline act, put in a spectacular performance befitting of such an occasion.

From the first bell the 25-year-old demonstrated why many fight fans believe he is the man to restore German boxing to its glory days, showcasing slick combinations and unnerving power to unsettle his opponent and delight the crowd.

With just 10 seconds remaining in the fourth round, the WBC International Super Welterweight Champion produced an electric eight-punch combination to send Juarez crashing to the canvas, and as the fifth round approached, Juarez’s corner waved off the fight to seal Baraou’s sixth stoppage victory in nine pro fights.

“I started well and I wanted a fast knockout,” said Baraou. “I boxed cleverly and stuck to my tactics. When he met me in the ring I was angry and I wanted him to feel that.

“It’s a shame he couldn’t compete for longer but he was a tough opponent who deserved every respect. My goal for the rest of the year is to improve my boxing and to fight for more international titles!”

“I wanted the knockout and I know I can do better,” said Ljungquist. “I am a perfectionist so I will never be 100% satisfied, but a victory is a victory. I am ready for the next step and would like to fight for titles soon!’

Promoter Nisse Sauerland was delighted with the evening’s proceedings and predicted a big year ahead for both the Team Sauerland fighters.

“Every time Abass Baraou steps through the ropes you know he’s going to bring excitement,” said Sauerland. “It’s a delight to watch such a special talent in action. It was another sublime display from Abass and we truly believe he is going all the way to the top.

“Kem produced another assured performance to get his tenth victory tonight,” Sauerland continued. “He knows he can do the rounds so it’s time for him to step up and fight for titles.”

Tough and battle tested veteran Samuel Teah will headline a big night of boxing that will take place on Saturday, March 7th at the 2300 Arena in Philadelphia when he takes on Dieumerci Nzau in the six-round junior welterweight main event,

The show will be the 1st promoted by RDR Promotions.

Teah of Philadelphia has a record of 16-3-1 with seven knockouts.  The 32 year-old is a seven year professional has scored some very high-profile wins on national television.

Nzau of Silver Spring, Maryland, has a record of 11-11 with eight knockouts.  Nzau, 31 years-old is an 11 year professional who is coming off a loss to Omar Bordoy on December 19th in Springfield, Massachusetts.

The undercard will feature some up and coming fighters from the Philadelphia area in four round bouts.